Rosatom plans fast reactors based on U-238

Technet, a Czech sci-tech server, published an interview with Vyacheslav Pershukov today, the deputy CEO and the director of the scientific-technological complex at Rosatom, the state-owned Russian nuclear corporation that is managing all Russian reactors that are in operation.

He says many things I should have noticed half a year ago because as Russia Beyond the Headlines mentioned in November (see also an echo in The Telegraph), there was a nuclear conference in October 2012 in a city whose name is nothing else than Prague where they presented plans to build new, "fast reactors" on the Russian territory with the help of 13 Czech companies.

And they seem to be better than the nuclear technologies we are using today.


Existing nuclear power plants are using uranium-235 which is rare (we need to get this one which is what enrichment is all about) and it produces lots of long-lived radioactive waste.


To make the story short, the fast reactors (or fast-neutron reactors) are employing the nearly omnipresent uranium-238 which can be supplemented with lots of other radioactive garbage, including the radioactive waste from the contemporary nuclear reactors. It's possible because they have a different speed of the neutrons which is allowed because the moderator isn't there at all and stabilization is achieved either by Doppler broadening, thermal expansion of the fuel, a neutron poison, or a neutron reflector. 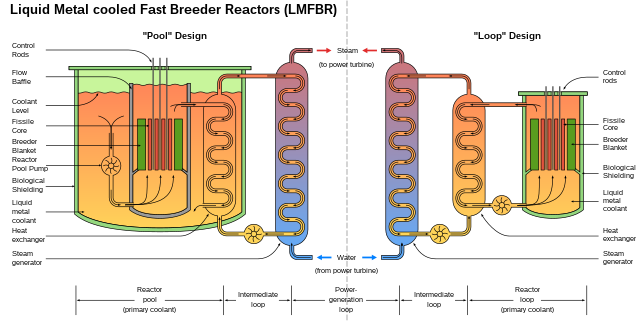 To make the story even better, some of these reactors are breeder reactors so they produce some new fuel along the way. The radioactive waste coming out of these reactors is a mixture of isotopes that only need to spend one year in the cooling swimming pools; plus plutonium and uranium-238 that may be recycled as fuel if they're properly separated. This separation procedure only exists theoretically at this point but they seem confident that it's possible.

To summarize, these reactors may use what we consider waste today; their own waste is a mixture of a new fuel and true waste that doesn't need to be stored for too long; they're more efficient; and they can't really explode because there's no water (but if the envelope breaks in the sodium-cooled reactor with thousands of tons of sodium, the reactor is finished – but safely so for humans).

The particular RBTH story focuses on the SVBR-100 lead-bismuth-cooled reactor (developed with the Czech companies) and the BN-800 reactor, a sodium-cooled fast breeder reactor, which is under construction in the Beloyarsk power plant in the Sverdlovsk region.

(Sverdlovsk is the communist name of Yekaterinburg, Pilsen's twin city in Russia: they have kept the name inspired by the heartless murderer of the tsar family for the region around the city. That surely sounds fair to our Russian brothers: if one name is after a tsaritsa, Catherina I of Russia, there must be another name derived from the killer of the tsar family. Yes, the murder of the family took place in Yekaterinburg itself. Lots of other bad things happened in our twin city. Last summer, for example, they found 4 barrels with 248 human fetuses over there. The kids could have built the adjoint representation of \(E_8\) but they were terminated...)

I hope we will see the new power plants soon enough. They hope to end the research and design of SVBR-100 in 2014 and run it in 2017. Independently of that, Rosatom is planning nuclear reactors for spaceships. There are two big challenges: to get it into space and to launch it over there. They're thinking about its first big test – a mission to Mars.

Meanwhile, Westinghouse claims to be ahead of its Russian competitor in the tender to complete the (not fast) Czech Temelín nuclear power plant.
Luboš Motl v 10:01 PM
Share