Waiting for peak oil: a paradox

As an enthusiastic proponent of fracking, Gene sent me a link to this NBC article


that argues, among other things, that due to fracking, the U.S. will leapfrog Saudi Arabia and Russia to become the #1 fossil fuel producer by 2020. Already today, we see amazingly dropping prices of natural gas and many other things will follow. The technologies are getting better all the time. You get the point but you may find more information about these matters. 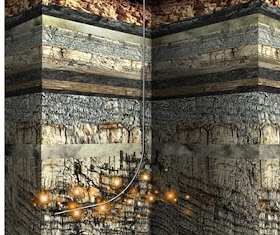 
And that was quite a contrast. Alexander lives in a different galaxy than Gene. He's waiting for peak oil every second, every day.


However, the complexities of the real world are making Alexander's waiting somewhat confusing, much like the beliefs of young rabbis in "Is Electricity Fire?", a story due to Feynman. The rabbis were trying to solve the puzzle whether the sparkling elevator was fire – an important scientific question because they wanted to know whether they could use the elevator on Saturdays.

Similarly Alexander is trying to find a maximum of a function. And it's so hard! 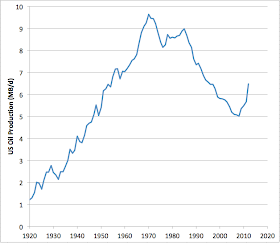 They just disagree! In particular, the first graph shows the holy moment Alexander has been waiting for – the maximum in June 2005. But the second graph shows nothing of the sort. It's a paradox for Alexander because in his way of looking at the world, the graphs should agree so the oil production should have peaked in 2005, too! But it didn't. Since a local minimum a few years ago, the U.S. daily oil production went up almost 30 percent.

Now, this is obviously nonsense. If we graphed the total oil production and the total oil consumption, we could get some agreement. But these two graphs are graphs of very different quantities so there is no reason why they should have maxima and local minima at the same places. In particular, the graphs have the right to differ because:
Please feel more than free to correct me and point out some difference between the graphs that is more important than the entries on my list. Which of the things is the most important one?

At any rate, a single difference above would be enough to explain differences in the locations of local extrema of the two graphs. Alexander's world view is one in which all the graphs are the same (and ideally, all of them agree with the global and local temperature and the CO2 concentration as well). It doesn't matter whether you draw barrels of oil or miles or ppm of CO2 or Celsius degrees here or there, whether the graphs are for the U.S. or the whole world, whether they're on per-capita basis or not, whether they include this or that, whether they're looking at a small fraction of the consumption or everything.

Alexander has pretended to be interested for things like oil production and oil consumption for many years but he has missed every single subtlety (well, they're not really subtleties) above. He still doesn't have the slightest clue how the world works. In fact, even when I told him about a subset of the reasons why the graphs differ and semi-joked that the mileage per capita dropped since 2005 because people begin to use Skype (and he therefore had a signal and opportunity to be more careful about the stuff he is writing), he showed another, less important aspect of his detachment from the reality. The stocks of Skype have to be going up, he said! A nice try but there are no stocks of Skype, a company that was bought by Microsoft NL in 2011 (as everyone who is getting e-mails about the "upgrade" of Windows Live Messenger to Skype knows).

Alexander believes that there may exist only one graph, the curve should probably be smooth (another nonsense but strongly believed by similar "thinkers"), and it should have a holy maximum that must be worshiped by everybody. Now, imagine how confused Alexander had to feel since the moment when he was spitted from the artificial environment of a vagina into the real world several decades ago (and he's getting increasingly confused). There are millions of graphs one may draw and each of them has different locations of the minima and maxima and his prayed-for peak oil maximum is not only non-existent but also ill-defined and utterly ludicrous and unimportant even if it could exist.

If you draw the total production or consumption – not just some per-capita figures – and if you include fracking, it's pretty clear that there won't be any peak for quite some time. Alexander will have to suffer through extra decades in which his beloved peak oil won't be coming but he will surely scream whenever he sees any blip, any foggy signal that may be misinterpreted as the Son of God of peak-oil-and-climate-armageddon-and-all-other-sky-is-falling-crackpot-stories-you-have-not-even-heard-about. He will misinterpret anything and everything that is ever seen or said as well as all the things that weren't even seen or said, hoping that his neverending sky-is-falling whining is sufficiently loud to convert his psychiatric pathologies into a reality. ;-)
Luboš Motl v 8:50 AM
Share