On March 9th, we commemorate the death anniversary of Hans Christian Ørsted. But there is a happier anniversary today, too.

Walter Kohn, a physicist who received the 1998 Nobel prize in chemistry along with John Pople, is turning 90. He gave the density functional theory to the chemists, highlighting the fact that chemistry is applied physics. Young physicists may know him because of the Kohn Hall at the Kavli Institute for Theoretical Physics in Santa Barbara, however.

He was born in Vienna, Austria, in 1923. His father was a committed pacifist, perhaps because his brother died while fighting for the Austrian interests in the First World War. Walter Kohn has never accepted pacifism. In fact, he was accepted to Canadian Infantry Corps on the last year of the Second World War. Decades later, he would fight against the Cold War arms race, however. But let me return a little bit.


Kohn is obviously Jewish. After all, Czech readers know "a Kohn" as one of the three main heroes of most of the Czech Jewish jokes, along with "a Mr Roubíček" and "Sarah". Walter Kohn has always had a strong Jewish identity. His father was born in Hodonín, Moravia, Czech lands of the Austria-Hungary, today Czechia, while his mother was born in Brody, Galicia region of Poland, today Ukraine.

Her parents were orthodox Jews who lived like monks in a synagogue. The rest of the family had a contact with traditional Judaism through them.

Walter Kohn's father had a business that produced postcards and ran into profitability problems sometime in the 1920s. He was sort of secular. Walter Kohn's mother was highly educated and spoke German, Latin, Polish and French and she had some acquaintance with Greek, Hebrew and English.


In the 1930s, Walter Kohn received some excellent education focusing on Greek and especially Latin (which he loved, especially because of their architecture). He had no interest in maths and got the only C at his high school. ;-) And when he was 7, he was photographed as the "Professor Know-Nothing". The 1938 Anschluss (annexation by the Third Reich) of Austria changed everything. Father's business was confiscated but he was still obliged to work in it. Walter's sister quickly emigrated to England. Walter himself found some defense in a Jewish school where they led him to science for the first time.

The people who pumped some love for science into Walter Kohn became victims of the Nazism. And so did both parents of Walter Kohn who couldn't manage to escape Austria. Be sure that one could add some details and additional stunningly sad stories but this may have been enough. You should have gotten the picture by now.

At any rate, Walter Kohn arrived to England in August 1939 as a saved child in the Kindertransport program. We in Czechia associate this program with Sir Nicholas Winton who saved 669 Czechoslovak children. Once Walter Kohn became a Briton, he was thinking about an occupation that isn't quite typical for the Jews. He wanted to be a farmer. ;-) Fortunately :-), he contracted a serious meningitis so the farmer training plans were scrapped and Kohn's adoptive parents redirected him to the school that helped to turn him into a scientist. 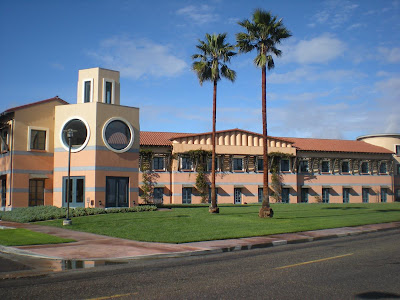 The Kohn Hall in Santa Barbara

In May 1940, Walter Kohn was interned in a British camp for "enemy aliens" – after all, he had an Austrian passport. While this looks like an absurdity stemming from this policy of Churchill's, it did help science once again because mature scientists were giving lectures on maths and physics over there (which Walter Kohn largely misunderstood). I guess that this wasn't the usual daily program e.g. in Dachau. ;-)

In July 1940, he was moved to Canada along with various German civilians. Quebec. New Brunswick. High school exams. McGill University junior exams. Things had to change rather quickly because when Walter Kohn was 18, he was already firmly looking forward to a career in physics with mathematics as the plan B. ;-) Let me tell you something. Such a speedy and total transformation of the officially worst mathematician at a school to a Nobel prize winner who brutally depends on advanced maths is only possible – realistically likely – in an ethnic group that has lots of excess, unused IQ.

Walter Kohn did receive various kinds of help, could buy some books, including Slater's Chemical Physics, and in 1942, Scotland Yard even cleared him of being a spy. ;-) In Toronto he also met Leopold Infeld, a collaborator of Einstein's, who recommended Kohn to enroll in a special maths-and-physics program. Chemistry was required but as a "German", he couldn't enter the chemistry building. A dean allowed him some exceptions for maths etc. He met many other important scholars – H.S.M. Coxeter is an example I knew.

During one or two summers, he worked for a small Canadian company producing electric devices for the military aircraft. He joined the army once he finished his junior year. In this context, he worked with tops a lot. In 1945-46, he was expelled from the army and took some crash courses that completed his graduate knowledge of tops and wave functions. Wise people told him not to stay in Toronto. One should learn different places, avoid stagnation, and so on.

So finally he received the Lehman fellowship at Harvard. J.H. Van Vleck was the department chair at that time. He was clever enough to rename Walter Kohn to Toronto-Kohn to distinguish him from another Kohn. Van Vleck offered Walter a project on the band theory of solids. Walter Kohn had no clue what to do with it. So the project was finally picked by a similarly named Thomas Kuhn, later a philosopher of science, but the idea was paradoxically enough later developed by Walter Kohn (and others), too. ;-) Van Vleck and Kohn became life-long friends despite the bummer.

Of course, there was another potential stellar adviser at Harvard. Walter Kohn became one of many students of Julian Schwinger. Kohn said he wanted to use the variational method somewhere. Schwinger told him to develop the method for Green's functions in three-body scattering problems, a task that Schwinger couldn't realize. For six months, it led nowhere but then Kohn dropped Green's functions and invented Kohn's variational principle for scattering – useful for nuclear, atomic, molecular physics. Schwinger was apparently disappointed that Green's functions were sacked but the work was still good enough for Kohn's 1948 thesis.

Phil Anderson, Ben Mottelson, and other sons were Kohn's friends at Harvard.

Kohn left Harvard after some postdoc jobs when Schwinger's work looked too deep to him. He accepted a job in the Polaroid labs in Cambridge and was encouraged to learn some condensed matter physics. He was again asked by Van Vleck to teach solid state physics or something like that. Because Kohn was frustrated by QED even more than by solid state physics, he agreed this time. The best way to learn something is to teach it and that's what Kohn did, too. Some students may have understood more stuff than he did but they were kind.

Walter Kohn considered himself a Canadian patriot and was looking for a more long-term job. By some accidents he moved to Pittsburgh and, equally importantly, to Copenhagen. Kohn scrapped his plans to become a nuclear physicist again because he had learned solid state physics in the recent years. Niels Bohr has never heard the phrase "solid state physics". So Kohn worked on older projects including scattering theory and criticized a wrong pre-BCS theory of superconductivity. He fell in love with Denmark where he could stay through 1952.

He has gone to other places, including Chamonix, France, and listened to Wolfgang Pauli's questions whether Kohn was a professor of physics or sodium after a not-too-convincing talk by Kohn. (Pauli also referred to himself as the child wonder in menopause.) After some time at Princeton, Kohn returned to Carnegie Tech in Pittsburgh. Lots of other things happened in Kohn's life – that had something to do with Bell Labs, the discovery of the transistor, BCS theory of superconductivity, and so on.

He developed the density functional theory in 1963, while on sabbatical in Paris where he was affiliated both with physics and metallurgy departments. The results he obtained looked shocking and shockingly simple to him. He couldn't believe them for a while. In subsequent decades, he worked on more or less related problems in San Diego and Santa Barbara. In Santa Barbara, he founded the ITP which is why the Kohn Hall was named after him. At least, I am convinced that it was called the Kohn Hall already in Spring 1998 when I visited KITP for the first time – half a year before he got the Nobel prize.