Today, we celebrate the birthday of three mathematicians who have heavily influenced physics: Pierre-Simon Laplace, Amalie Emmy Noether, and Ludvig Faddeev. But because I posted the biographies four years ago (click at the previous sentence), I won't do so again.

Instead, let me mention that six years ago, set theorist Paul Cohen died. He is the man who proved that the axiom of choice can neither be proved nor disproved using the Zermelo-Fraenkel (most popular) set theory axioms and who repeated the same achievement with the continuum hypothesis.

So it's up to your belief and aesthetic preferences whether there always exists a set whose intersection with each set in an infinite set of sets has one element; and it's up to your taste whether there exists a set that has more elements than the set of integers \(\ZZ\) but fewer elements than the set of real numbers \(\RR\). Thanks for that freedom, Prof Cohen.

Incidentally, I am agnostic about the continuum hypothesis because the very idea that the real numbers aren't countable seems a bit artificial to me because the proof uses totally unnatural maps one can't really encounter. For the same reason, I prefer to use the freedom won by Paul Cohen to prefer a picture where the axiom of choice is invalid. The picked set if the AC is believed is non-canonical, unnatural, and if you assume AC is false, you earn the extra freedom to assume that all subsets of an interval are Lebesgue measurable sets – and that's a reassuring situation for a physicist, I think, regardless of the fact that mathematicians must reorganize (and extend) the proofs of some theorems that remain valid, anyway.

But this blog entry is dedicated to someone else.


When Dr Sheldon Cooper's sister mentioned that she was saying that her brother was a rocket scientist, Dr Sheldon Cooper remarked that it was so humiliating: she could have equally described his brother as a tall taker at the Golden Gate Bridge. ;-) This is a theoretical physics blog so we don't run CVs of ordinary rocket scientists here. But according to NASA, Wernher von Braun was the greatest rocket scientist ever so he gets an exception.


Wernher Magnus Maximilian, Freiherr von Braun was born to an aristocratic family 101 years ago, on March 23rd, 1912. Being an equivalent of a Baron (Freiherr von Braun) is a special condition. I find it cute and special, too. On the other hand, I refuse to learn the family trees of both parents because we would be like a tabloid magazine here. ;-)

For the same reason, I won't discuss a nameless aristocrat Maria Luise whom he married and did her three children who were doing fine even though the wife was his cousin on mother's side. OK, let's stop this stuff. 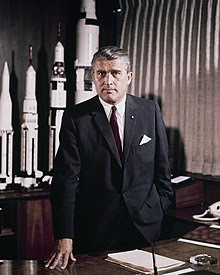 He learned to play the cello and the piano, could play Beethoven and Bach from memory, and wanted to become a composer. He has actually composed several playful pieces (probably more impressive ones than your humble correspondent) but I wasn't able to find them. If you know an audio or video link with them, please don't keep it in secret!

When he was a 13-year-old boy in a boarding school, he sucked in maths and physics. But because space fascinated him, especially once he acquired Hermann Oberth's book on rockets (von Braun remained a huge fan of the author), he decided he had to learn maths and physics, too. Wait for two sentences to see how this plan worked. When he was 18, he joined the Spaceflight Society in Berlin. He concluded that major technological advances would be needed. He picked University of Berlin to learn more about physics, astronomy, and chemistry and got a physics PhD in 1934. This degree is what qualifies this music composer and rocket scientist to have a CV on TRF. :-)

When von Braun was in the early 20s, he told cosmic radiation physicist and balloon-explorer Auguste Piccard after a lecture that he was just planning to go to the Moon soon. Piccard responded with some encouragement.

He had mixed-to-positive opinions about Hitler's regime that were drifting towards the positive side when Hitler could reach some easy successes. But in 1937, as the technical director of the Army Rocket Center, he was officially requested to join the party and he did so much like the majority of people in Nazism and communism who were told the same thing. His work was simply more important for him than some subtle moral considerations. It's likely that his sending of the fees was the only "politics" he has really done in that party.

Von Braun did well in the non-democratic setup. In 1940, he also joined the General [Allgemeine] SS which wasn't an armed unit. If you believe his memoirs, what was important for him was the active attitude of General SS to pursue rocket research. He appeared on a picture with Himmler in a uniform, too. But it wasn't all rosy. He was arrested and accused of being a communist sympathizer in 1944, too. Released. Things were dangerous for him especially because he was a skillful pilot, too.

In his job, he would lead the development of jet-assisted takeoffs, the A-4 ballistic missiles, and some anti-aircraft missiles. The first combat A-4 was to be used against Britain in 1944. It was renamed V-2 [Fow-tsvai]; if you're hoping that it stood simply for "von Braun", I must disappoint you. It stood for a simple word "Vergeltungswaffe" (retaliation weapon). He liked V-2 because it was so good to go to space; so the only bug was that it landed on a wrong planet (Great Britain). Mort Sahl invented the caricature of von Braun saying "I aim at the stars, but sometimes I hit London". :-)

In Spring 1945, he knew what was going on so he gave his team a research project, to find out to whom they should surrender. And be sure that the Soviets didn't win this tender. ;-) After a complicated arm fracture from a car accident, he left the hospital early. He also hid some secret documents in an abandoned mine. The surrender wasn't hard. The hard work was done by von Braun's brother who approached a soldier from the 44th Infantry Division (in the Northeastern corner of current Germany) on a bike and told him in broken English: My name is Magnus von Braun. My brother invented the V-2. We want to surrender.

For 4 months in 1945, von Braun was already in the U.S. secretly, due to a plan by a predecessor of John Kerry. The American politicians wanted him so they fabricated von Braun's CV. He was suddenly as clear as a lily. He's been never a member of the party, and so on. This dishonest trick was justified by the ends. Von Braun started the U.S. space program in 1958. Still, he had to watch that the Soviets were almost always a year or several years ahead of America.

Von Braun explains "a man in space" in a 1959 Walt Disney film. Be ready for a dropping pressure in a spacesuit and the body's annoyed reactions, people undergoing the acceleration of \(35g\), a four-stage rocket prototype (the upper one seems to be a space shuttle of a sort). He said a practical rocket for people could be ready in 10 years; the Soviets were clearly faster (Gagarin was there just in 2 years) but his estimate/plan was otherwise very realistic, we know today. If you find von Braun's German English funny, realize that the English German is also funny.

Wernher von Braun is the father – or at least the main co-father among the influential people – of many astronaut-related concepts we take for granted these days. The liquid fuel rockets have been mentioned. But he popularized/co-invented the manned space station, rotating wheel-shaped station that creates artificial gravity, he sketched a permanent lunar base, and drafted preliminary plans for a manned mission to Mars. During the coldest years of the Cold War – they were so cold that the war was almost hot – he would think about an orbital warfare.

Much of his later career would copy the history of the U.S. space program including the Apollo program. I won't try to cover that because I am no expert. In 1972, he left NASA and went to a private space research company for a while. He died of pancreatic cancer in 1977. 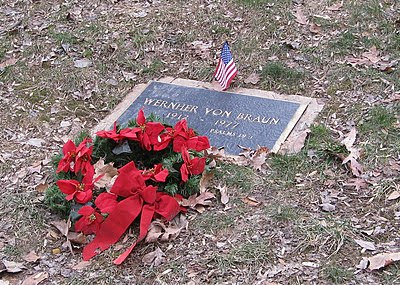