Quick links: the new AMS-02 paper (open access); liveblog from the CERN talk (US LHC blogs); a remarkably accurate popular overview of the situation and the implications of SUSY models (The Economist!)


At 5 pm CERN Summer Time, I was watching a CERN talk by Sam Ting of MIT, a Nobel prize winner for J/ψ and the boss of the AMS Collaboration, via webcast.cern.ch. I was impressed by the complexity of the problem to do such an experiment in space, by the professional attitude by Ting and lots and lots of collaborators, and by the number of subtleties and tests they had to be careful about.

The AMS Collaboration released a press release. Just to be sure you know what we're talking about, the 7.5-ton gadget on the board of the International Space Station measured the number of electrons, positrons, and protons at various energies between \(1\) and \(350\GeV\) coming from various directions of the heavenly sphere.


Ting hasn't shown the absolute numbers yet – they will appear in a paper that will be out within days – but we've seen the positron fraction. The graph is incomparably more accurate than the corresponding graphs by PAMELA and Fermi. The positron fraction (of the positron+electron "whole") starts at about \(0.10\) near \(E=1\GeV\) on a plateau that smoothly begins to drop, reaching a minimum of \(0.05\) near \(9\GeV\) or so, another plateau. 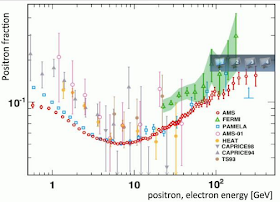 Then it begins to increase again, reaching something that looks as another local extremum (well, a global maximum) near \(200-350\GeV\) where the positron fraction is close to \(0.15\).


The number of detected particles becomes too low – the error margin is pretty high – for these very high energies although it's still comparable to the "normal" number of particles that PAMELA built their claims upon. In the last "unclassified" bin, \(260-350\GeV\), they see just \(72\) positrons and they decided not to show the data above \(350\GeV\), something that a female physicist with common sense aptly asked about (well, so did one young man before her but Ting vehemently pretended he didn't understand the question; incidentally, despite his clear East Asian accent, I understood his English perfectly).

Ting has explained that he is an A* experimenter who would never publish anything wrong so all of us had to wait. It took 18 years for AMS to get to this point so be ready for a few more decades. However, your humble correspondent has performed a thorough analysis of Ting's words and facial expressions. I have determined, with the statistical significance of 4.5 sigma, that the facial expressions are the same as those of Sheldon Cooper who is trying to keep a very exciting secret (example video). For example, he had more nervous ticks than a lime disease research facility.

So I think that the number of positrons above \(350\GeV\) is very, very low. Ting admitted that the number of electrons is still very high but he didn't say anything explicit about positrons. ;-) My quantification of Ting's facial expressions indicate that there are \(O(100)\) electrons above \(350\GeV\) but only \(O(1)\) positrons, perhaps one positron (an event we were shown). The fraction probably drops well below 0.15 – perhaps to 0.01 etc. – very sharply. Ting is afraid to tell us because he would run the risk of claiming a bogus discovery.

Let me mention that if there are 100 electrons and 1 positron above 350 GeV, the probability is really small that the fraction is above 0.05, for example. And this drop – a drop that was totally hidden in Ting's official words and encoded in his facial expressions only – is the smoking gun for dark matter. Note that dark matter particles such as neutralinos may just annihilate \(\chi\chi\to e^+e^-\) but this decay rather abruptly stops above a certain energy related to \(m_\chi\).

Without this crucial censored information, theorists are obliged to wait. The fluxes of the electrons and positrons may be parameterized by simple smooth functions as they're lacking any discontinuities or other sharp structures. In this form, ignoring the information conveyed via facial expressions, it's plausible that the positrons and some electrons are emitted by pulsars (the astrophysical sources of choice here), too. Pulsars are spinning neutron stars. Those in the galactic plane would have to be the key here. I personally think that the pulsar theory is in bad shape due to the angular distribution etc.

To summarize, the data he has shown are compatible with some theories of WIMP particles of dark matter – perhaps some new force with force messengers \(1\GeV\) heavy in the dark sector could be handy to explain the drop of the fraction above \(1\GeV\) which would be very interesting if proven more reliably. This compatibility is encouraging by itself but I feel that the AMS folks actually have much stronger a piece of evidence supporting the dark matter interpretation than what they showed us – and it has something to do with the (missing) very high-energy positrons.

That's what I wrote after the CERN lecture. The rest of the blog entry is older.


Watch the AMS dark matter webcast now!
A press release is out now: positron excess, the slope does decrease later (but the fraction itself stabilizes: but the drop could be above the cutoff they imposed due to a growing error), consistent with WIMP annihilations in somewhat natural enough models (!) that probably require a new DM-specific \(1\GeV\) force messenger, other explanations (in particular, pulsars) not yet ruled out. Sadly, even a model with \(e^+e^-\) fluxes, each composed of diffuse and power law components.

Wednesday, April 3rd, is the day when the Alpha Magnetic Spectrometer will announce its first, potentially interesting results that will have some implications for our knowledge about dark matter.

First, at 5 pm Prague Summer Time (11 am Boston Daylight Time), you will be recommended to listen to Samuel Ting at webcast.cern.ch...

At 1:30 pm Washington DC Daylight Saving Time i.e. 7:30 pm Prague Summer Time i.e. 2.5 hours later i.e. 90 minutes after the talk above is over, you may open NASA TV at www.nasa.gov/ntv which will air a briefing from NASA headquarters.

I am a bit confused about the tomorrow's location of Samuel Ting. Will he be present at CERN, in Washington DC, will he be communicating as an otherwise located person, or will he be teleported from the Old World to the New World within 90 minutes? Oops, yup, the question is actually answered in the press release about the NASA briefing: Ting will be present in DC only via a video link while 3 extra people from DOE and NASA will talk from DC.

This blog entry will be updated once the information becomes available.
Luboš Motl v 5:00 PM
Share