The video below shows one of the blasts a few meters from the camera (that starts to swing); the other blast is heard elsewhere 13 seconds later. Think twice whether you want to watch it at all.

It's a special negative feeling to see people murdered at a place that I know so well as the place above. There's the Old South Church on the left side of the video above (Google Maps); the Copley Square with the Trinity Church (and the Hancock Tower next to it) would be seen just 100 meters further on the right side.

I've been in downtown Boston approximately (at least) every other weekend during my 6 years at Harvard. Boston proper was just a more attractive place for me than Cambridge – the latter is kind of provincial, boring, and full of hypocritical leftists while Boston is a proper, ideologically diverse megacity with the life and business of all kinds one expects from an unfiltered center of America.

Moreover, one doesn't have to walk for 2 miles to find a fast-food restaurant with hamburgers in Boston – a type of business that the leftists apparently want to eradicate.


You may hear that the sound of the blast was loud and guaranteed to create panic. This was a truly vibrant place and, it's easy to say now, a rather natural target for terror. Relatively speaking, the number of casualties is rather low. Thank God but let's not thank Him too much because it's still bad.


I have no idea who is behind the terror – nothing to say except that I would surely also catch and investigate a 20-year-old Saudi student if I found one next to the explosion. It's a good idea to monitor potentially dangerous – while simple enough – activities at similarly vibrant places. On the other hand, I hope that America will be wise enough not to overreact. Life shouldn't be stopped because of one explosively sad event. 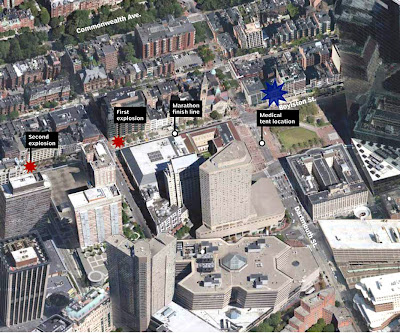 The map of the blasts; thanks to Joseph S.
Luboš Motl v 11:07 AM
Share