For some time, I have been joining the "alerts" that it's plausible that the dark matter particle could be discovered very soon and it could be great.

In fact, there are three complementary strategies to search for the dark matter particle and there are good reasons to expect that they could provide us with some powerful evidence in favor of a specific dark matter particle rather soon: the direct production at the collider (LHC), the analyses of cosmic rays and radiation by space telescopes (AMS etc.), and the direct search experiments (germanium etc. in the abandoned mines). 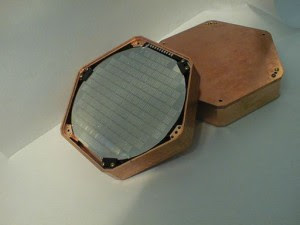 It's a time for some potentially shocking news from the "third leg" of the WIMP witch hunt.


Nature blogs just told us about an APS conference that took place in Denver, Colorado on Saturday (well, it continues through Tuesday):


The relevant, loud experiment is CDMS (Cryogenic Dark Matter Search) in the Soudan Mine in Minnesota. Recall that in late 2009, CDMS informed us about two dark-matter-like events and it has placed itself among the "dark matter is seen" allies in the "is the dark matter seen?" war on the new particle's existence.


Things have apparently gotten a little bit more interesting in CDMS. Now, those eight silicon detectors have seen three events. But it's not just the number of events that is somewhat higher now. The late 2009 events could have been interpreted as background rather easily. The three new 2013 events are claimed to be substantially further from the background appearance.

While the certainty isn't enough for a formal discovery, it's being claimed that the signal is equivalent to 3+ standard deviations or so, about 99.8% confidence level. The expected background was \(0.7\) events.

But what I find remarkable is the precision with which they dare to suggest the mass of the WIMP: it seems to be \(8.6\GeV\). You see that it's clearly the same range as the \(7-10\GeV\) we've discussed in the context of the "WIMP is being seen" claims for years (an unexpectedly light estimate for a WIMP mass, at least for a majority of theorists) but the indicated precision seems to be much better now. Unfortunately, they didn't include an error margin.

Amusingly enough, \(8.6\GeV\) is also one of the two lower bounds on the WIMP mass that appear in this paper. On the contrary, you can't find this figure in the newest CDMS II paper from Friday.

These claims will be investigated by several competing experiments in the near future. XENON1T is an upgraded XENON experiment – before the upgrade, the XENON folks were staunch members of the "dark matter is not seen" axis. However, very soon, a new – and so far neutral – player could enter the war: LUX in South Dakota; see also LUX news. 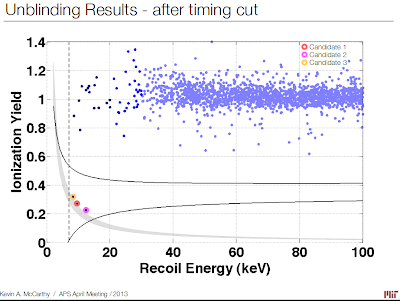 In the afternoon, the experimenters released lots of details officially (including a relevant preprint) and I added this paragraph and the picture above which I find rather amazing. Does the picture convince you that the three colorful babes don't belong among the rank-and-file blue background lads but instead, they must belong to a separate hyperbola-like curve?

I am "almost" definitely convinced and I would think that if one includes all the tantalizing properties of the three events into the background-plus-WIMP hypothesis, the probability that they will agree assuming just the background will be way lower than 0.2%. We have three candidates each of which optically seems to be 3 sigmas beneath the "background cloud" and all of them sit on a hyperbola within 5 percent, with no other events differing both from the background and the hyperbola. I think that this happening by chance is really over 10 sigma.

Here (via Jester) you see the favored/excluded regions according to different runs of different experiments. Note that when there are lines, the experimenters claim that everything above it is excluded. XENON-10 and XENON-100 exclude a lot and contradict the parameters suggested by signals by CoGeNT and, now, CDMS. On the other hand, CDMS (the big asterisk) and CoGeNT (the purple island around it) are beautifully and nontrivially compatible with one another. CRESST with its positive claim suggests a 20% higher WIMP mass and/or cross section but it's not "totally" incompatible with CoGeNT and CDMS (a non-minimal model for dark matter could reconcile all the experiments). Given the fact that the presence of a new particle in the region seems to be a 50-50 possibility, it may be a good idea to demand the exclusions to be at 5 sigma and not 2 sigma, too. With this rule, the XENON exclusion would probably no longer contradict the positive claims while the positive claims could exceed a 5-sigma threshold for discovery in combination, too.

In Denver, some teams also talk about the searches for axions. They promise a final Yes/No verdict on axions within a few years.