Dark matter may be a complicated sector

Among the hints of dark matter, I believe that the three apparently decidedly non-background-like events seen by CDMS II represent the strongest hint of a dark matter particle we have seen so far.

However, there are other hints, too. Even though the AMS-02 folks haven't told us everything they know yet, it seems very plausible that they have already seen somewhat clear evidence of a rapid drop of the positron fraction at high energies.


An obvious interpretation is that at most one of these signals is genuine and the other ones – or all of them – are illusions, signs of mundane astrophysics, or flukes. But there's also another possibility: two signals in the list or more may be legitimate and they could imply that the dark sector is complicated and there are several or many new particles in it, waiting to be firmly discovered.

While I find it legitimate to think about the "simplest" theory with one new effect, one new particle species, and so on, I think it's important to realize that this sort of naive minimality is no deep unbreakable principle of physics – and in fact, it has been mostly wrong in the history of physics. Isidor Isaac Rabi asked "Who ordered that?" when the muon was discovered. We know that there are three generations of leptons and three generations of quarks. The number three seems non-minimal but later, we have learned that it could be a good thing e.g. for the CP-violation although the CKM matrix CP-violation probably isn't necessary for baryogenesis.

The Standard Model group has three factors – an arguably non-minimal number, too. The sizes of the groups are non-minimal, too. The very classification of matter as leptons and quarks may be viewed as a non-minimal feature, too. And so on, and so on.

The dark matter must be sufficiently long–lived and sufficiently weakly interacting with the visible matter. There exist various "philosophies" suggesting how to explain these general observations at a deeper level. Concerning the stability, a particle is stable if it has nothing to decay into when the mandatory conservation laws (or extremely accurately valid approximate conservation laws) are imposed. This typically means that the particle is the lightest particle that carries a certain kind of a charge.

The electron is stable because it's the lightest particle with a nonzero electric charge \(Q\), one that is (and has to be) exactly conserved. The antiparticle with the opposite charge, the positron, has the same mass and the same degree of stability by the CPT-theorem; this rule is universally valid.

The proton is (nearly?) stable because it's the lightest particle with a nonzero baryon number \(B\). This quantity is approximately conserved because of an "accidental symmetry": all renormalizable gauge-invariant interactions you may write for the Standard Model fields just happen to conserve \(B\). A theorist would say that it's extremely likely that \(B\) isn't conserved exactly. For example, a star may collapse into a black hole which may evaporate to radiation with a nearly vanishing \(B\) – different from the \(B\) of the initial star.

In supersymmetric models of dark matter, the lightest superpartner (LSP) is typically stable because it's the lightest particle in the spectrum with a negative R-parity, \(R=-1\). The negative parity plays the same role as the nonzero value of an electric charge or the baryon number: it is an element of the group that is not equal to the identity element (which we call \(Q=0\) for "additive groups" but \(R=+1\) for "multiplicative groups").

People often want to be "economical" so they assume that there are no extra conserved charges and no extra exactly stable particles (the massless particles such as the photon and graviton have to be stable, too). However, there may be lots of stable and long-lived particles we don't know yet. 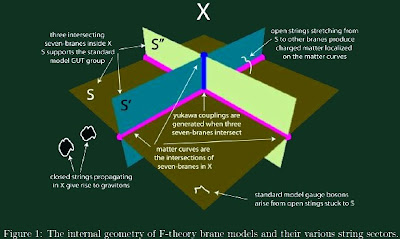 String theory compactifications may provide us with lots of additional \(U(1)\) groups "remotely analogous" to the electromagnetic \(U(1)\), and lots of discrete groups we don't know from observations. Also, as the picture above sketches, physics may arise from "braneworlds" in which different particle species and their groups are localized to different submanifolds of the compactification manifolds. If it is so, it's very natural for several particle species to have nearly negligible interactions with one another – because they're always separated in the direction of extra dimensions.

All these vacua may offer us lots of scalar fields (e.g. a whole "axiverse" of axions), lots of new symmetries, lots of new form fields, unknown families of matter, fractional charges, magnetic monopoles, and other types of matter. The menu is rich, perhaps too rich – which is annoying for us who don't know what we should pick.

The dark sector may be comparably complicated to the visible sector (with extra long-range forces, atoms and molecules of a sort, and so on: feel free to turn your fantasy on) – although it may still differ in some respects. There are many papers about that, of course. One of the people who have promoted the possibility of a complicated dark sector for years is Glennys Farrar who taught me a particle physics course at Rutgers. See e.g. this 2003 paper by her and Peebles.

Even if we decided that the dark sector is a "sure thing", we don't know for sure what awaits us over there, not even how large and diverse it is and which philosophy about the complexity of the sector and the reasons for its stability or decoupling from the visible world is the right one. We must be sufficiently open-minded and listen to the empirical data that are probably starting to arrive, although somewhat modestly and cautiously so far.
Luboš Motl v 9:28 AM
Share