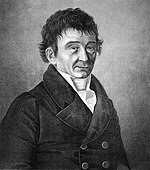 Ernst Chladni, the father of acoustics and the father of meteoritics, passed away in Wrocław (German: Breslau, Czech: Vratislav) on April 3rd, 1827.

He was born 70 years earlier, in 1756, in Lutherstadt Edward Wittenberg. However, his family came from Kremnica, a mining/minting town in Central Slovakia (a part of the Kingdom of Hungary). The name "Chladni" plus minus small variations means "cold" in Slavic languages.


Because Wittenberg is a Lutheran town, it shouldn't be shocking that his paternal ancestors and uncles were achieved Lutherans – deans, clergymen, historians, theologians, law professors, and so on. Ernst was supposed to become a lawyer, too. Science wasn't tolerated. So he had to get a law degree in Leipzig in 1782 and wait for his father's death which came on the same year. That's when Ernst could begin to study physics.

It sounds cruel but when a smart kid's father is a control freak, it's often the only solution. This particular kid was 36 years old when he was finally allowed to study what he always wanted to study.


What we associate with Chladni's name today are the Chladni figures, observed in detail in 1787. Here you have some cool enough examples:

When the guitar or a plate vibrates because of the sound waves going through/around it, a generic point moves up and down (transversely to the plate) which encourages the sand particles to drift. However, for well-defined frequencies, you also find "nodal lines" – co-dimension one loci where the vertical vibrations disappear. The sand particles may sit near these places and they don't move. That's why you see them: the sand gets concentrated over there.

An exercise for you: Are there nodal lines for every frequency or just for a discrete subset of eigenfrequencies?

It's sort of strange how much time it took for someone to draw the actual shape of the nodal lines – the sand was helpful – because Robert Hooke first observed that there were some nodal lines more than one century earlier, in 1680, but he didn't manage to do any detailed measurements and no one after him cared about it for 100+ years, either. Just to be sure, Chladni not only drew some sandy lines on the guitar and other plates. He also derived Chladni's law,\[

\] for some constants \(C,p\) where \(f\) is the frequency and \(m,n\) are the numbers of diametric (linear) and radial (circular) nodes. Cymbals, handbells, and church bells care about this law. Chladni also estimated the speed of sound in various gases: he pumped these gases into organ pipes and listened to the results (and did some calculations).

Chladni also created some instruments, e.g. those with glass rods of different lengths. He traveled across Europe with his concert show – well, a physics demonstration.

Finally, in 1794, Chladni proposed that meteorites were of extraterrestrial origin – despite the prevailing belief that they were of volcanic origin. You may imagine the humiliation etc. Other people who later convinced everyone that Chladni was right all along mostly contributed their P.R. techniques and brainwashing.
Luboš Motl v 1:32 PM
Share