Fox News and all the other media are full of the breaking news that the Italian police have seized €1.3 billion from Vito Nicastri. 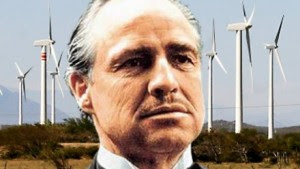 This guy with unsurprisingly close ties to the Mafia (including Matteo Messina Denaro, the widely believed Sicilian Mafia godfather) – which has an intertwined history with "renewable energy" – is accused of being the "Lord of the Wind" and the "King of Alternative Energy". The confiscated assets include 43 wind and solar companies, 98 real estate properties, and 66 banking accounts (it must be handy to have this many).


The assets were originally frozen in 2010; they were seized now. Nicastri was placed under surveillance and must remain in Alcamo for three years. Meanwhile, Al Gore remains at large.


In the past, the Mafia has operated in various businesses – I (Mr Vito Scaletta) was just playing Mafia II, a great PC game, so I am in the right spirit to read similar stories – but in recent years, the "renewable energy" has become a much more characteristic industry for the Mafia than prostitution, gambling, and other activities.

The amount $1.7 billion is the largest seizure of Mafia assets ever. I don't need to explain to you how large the seized wealth is. $1.7 billion is pretty much exactly equal to the net worth of the 2nd richest Czech citizen, Zdeněk Bakala (who is still running as a coal baron and I don't suggest any Mafia ties in his case). For the sake of completeness, the richest Czech Mr Petr Kellner has over $9 billion and works in the financial sector.

Let's hope that Nicastri won't be the last man working in this giant "renewable" scam who will be led to justice. If you know someone who works in this "renewable" business or promotes the climate hysteria, you may call your local police or 911 because the chances that he or she is not a criminal are close to zero.

Czechia formally surrenders to the EU

Today, we saw many unfortunate events that we knew were guaranteed to happen once we learned about the list of serious presidential candidates to succeed Prof Václav Klaus. The new president Miloš Zeman signed the monstrous permanent EU bailout fund, the "Eurowall" (at least, he was the last one among the EU heads of state), and welcomed José Manuel Barroso to the Prague Castle.

Barroso is a trained Maoist which has probably helped him a lot to become a part of an obnoxious group of European would-be dictators. As you should know, according to the laws, the European Union has no flag or anthem – they were refused along with the European Constitution and they didn't appear in the Treaty of Lisbon again (the absence of symbols is the only major difference between the constitution and the treaty!), so the blue clothes with 12 communist stars recoated yellow that they hanged above the Prague Castle are just a personal symbol of Mr Barroso and his accomplices. They don't care and use the clothes as if they were an actual flag – they're spitting on the laws, including their own laws.

The politically conscious and patriotic part of the Czech nation (well, it's equivalent to the Party of Free Citizens SSO in this case) was shouting "shame" and "we don't want the EU flag" and whistling throughout the ceremony – see the videos here or here. They protested that the Czech anthem was played while Barroso's personal flag was raised – a degradation of the Czech anthem that not even commies dared to commit. It didn't help.

Of course that it is not the ultimate catastrophe but I would lie if I claimed that I don't see any similarity between today's events and those in 1939. On March 15th, Bohemia and Moravia became a protectorate of the Third Reich. Hitler spent just 24 hours in Prague but did all the paperwork. A silent majority of Czechs was doing fine on that day, was even welcoming German soldiers (and communicating in German), and the Czech journalists would even admire the tall and slender physiques of the German soldiers. While Czechs liked to talk about their courage, the approach of the majority was so painful that even Die Zeit had complained about too many bootlickers in the Czech lands.

Thank God it is Zeman who was raising the EU "flag" and not e.g. Schwarzenberg whose broken Czech and other aspects would add an extra flavor to the event. Zeman, a self-declared "soft eurofederalist", thinks that many ideas invented in the EU are silly. He sort of favors common defense and foreign policy – and not too much unification in other respects – which is cute because when it comes to defense and foreign policy, he diverges from the EU politically correct speech codes more than Klaus did. He favors a hard line approach against Islam and Israel's membership in NATO, among other things.

I have never attended a match in the NHL (or cared about the league, for that matter). But I am almost sure that if Jaromír Jágr had joined the Boston Bruins a decade earlier, it could have been very different! ;-)
Luboš Motl v 11:39 AM
Share