Many people in Pilsen follow soccer as well as ice-hockey; our teams were great in recent years. 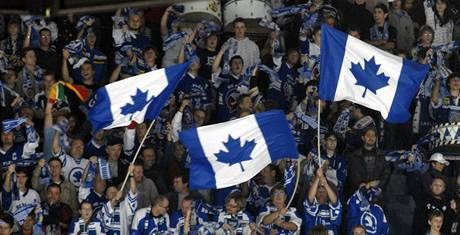 A flag of HC Škoda Pilsen...

Just minutes ago, HC Škoda Pilsen, the local ice-hockey club, defeated HC Zlín in the last, seventh match. At 96:15 (!!!), the captain and playing 40-year-old owner Martin Straka – the local ice-hockey emperor whom North American readers may know as a New York Ranger (and, previously, a member of 5 other NHL teams) – scored the decisive goal in this incredibly hotly contested series of final matches.


Despite the immense contributions of Pilsen to the Czech ice-hockey, this is the first victory of the Pilsner team.


A reason why North American TRF readers should be pleased is that Pilsen is the most American city in Europe; and HC Škoda Pilsen is also the most American/Canadian team in the extra league – as the flag above, one of the unofficial flags below, indicates. Nicolas St. Pierre of Canada and Ryan Hollweg and Nicholas Johnson of the U.S. are among current players who celebrate the title. Several other Canucks and Yankees have played here, too.

Several years ago, this Native American was added to the logo which now shares the place with the Škoda logo. The Native American on the logo is a modernized version of a symbol of the 2nd Infantry Division that liberated my hometown in 1945. Throughout communism, it wasn't quite possible to discuss the liberation by the U.S. army. The ice-hockey club has changed its name 11 times.

HC Zlín is a Moravian team from the town where Tomáš Baťa founded the shoe company. During communism, the town was renamed as Gottwaldov after the scaled-down Czech counterpart of Mr Stalin, namely Mr Gottwald.
Luboš Motl v 10:41 PM
Share