An extremely cloudy Prague in 2013

A Czech Canadian e-pal has complained to me that "the month of May was worth [an excrement]: cold, windy, rainy etc". But that's nothing compared to the first five months as we have experienced them in Czechia. The Czech media such as The Week (EN) have told us about some cold hard figures describing the weather in Prague between January 1st and May 17th, 2013.


In this 137-day-long period, the number of hours when it was "clear skies" in Prague was just 80. To compare, it was 417 hours in the same period of the year 2011. I kid you not: the total length of the "clear skies" i.e. sunny weather in Prague dropped by a factor greater than five! (The figures refer to the Ruzyně station near the Havel airport.)

The cloudy, rainy weather may be blamed on the frequently low pressure but why the pressure is so low in 2013 isn't being explained by anything more fundamental that the meteorologists would be able to tell us. This lousy weather shouldn't continue indefinitely but the predictions suggest that the cloudy, rainy mess will actually continue for a few more weeks, well beyond the May 17th deadline I have mentioned.


The differences are extreme when we demand the "clear skies" but there are significant gaps even if we compare more inclusive quantities such as "the average percentage of the skies covered by clouds". In 2011, it was 61%; in 2012, it was 65%. In 2013, it was a whopping 82%. And let me remind you: this is not just some day-to-day variation of the weather but a comparison of periods that are almost half a year long! 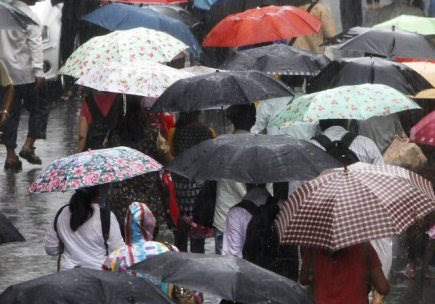 The meteorologists warn that there could be floods but I don't think that there is such a direct relationship between a persistently lousy weather and floods. Impressive enough floods probably require some accumulation of water in the atmosphere while the persistently bad weather is delivering the precipitation in the form of rather uniform showers. These neverending showers and clouds is what the climate alarmists present as the "nice homogenized weather free of any extremes" but I have called it the "socialist weather" for 30 years (because this is how I remember the early 1980s) and even though farmers may like it, I am confident that most people agree that such a weather simply sucks.

Needless to say, the articles also mention promises of a global warming trend that our weather should eventually return to. Nice.

I want to emphasize how much more important these annoying yet mundane changes of the weather (which self-evidently have natural causes) are relatively to the "marvelous" effects that the promised global warming trends could ever bring us. If your good mood strongly depends on a sunny weather – or even clear skies – your reasons for a good mood were 5 times weaker than 2 years ago. That's a huge difference that may encourage suicides, the folks suggest. And I am not even going to explain what the cloudy weather does to the photovoltaic industry in which Czechia is still a major "power".

On the other hand, even if you adopt the hugely overestimated median predictions by the IPCC, the overall change of the global temperature during the two years that they want to attribute to CO2 is something like 0.03 °C. Imagine that you are a sane person and I ask you: What is the more important change among the following two: the increase of cloud cover from 61% to 82% or an increase of the global mean temperature (that is only very weakly correlated with the local temperature anywhere) by 0.03 °C?

Clearly, no human in the world could possibly detect the latter without special gadgets – and even common thermometers aren't really enough. On the other hand, everyone notices the lousy weather we've had in the Czech Republic since the early 2013 or so. After all, the clouds decide about more than 10 °C changes of the temperature during the daytime, 300 times greater temperature difference than the hypothetically CO2-induced temperature change. It's important to see various events and changes in the proper context and ignore events and changes that are manifestly 100+ times less important than certain other things that we pretty much ignore, too.
Luboš Motl v 4:53 PM
Share