By the number of mathematical papers he wrote, Augustin-Louis Cauchy was second just to Leonhard Euler. As many college freshmen may testify, more theorems and concepts in mathematics were named after Cauchy than anyone else. And a conservative theoretical physicist shouldn't omit a CV of Cauchy because Cauchy was... well... very conservative!

He died on May 23rd, 1857, i.e. exactly 156 years ago. But before he managed to do that, he had to do many other things. For example, he had to be born – in August 1789, just a month after Bastille was stormed by a crowd on the street, a mess we often call the beginning of the French Revolution.


Louis François Cauchy, i.e. Cauchy's father, had really nothing to do with this mess. He was a high official in the Parisian police before the revolution took over (during the "New Regime"). During the Reign of Communist Terror in 1794, when Cauchy was five, the family had to move to Arcueil. Things got safer when Robespierre – a guy who worked to transform bourgeoisie to a gang of leftwingers – was finally executed in 1794 and the family could return. When Napoleon took over 5 years later, Cauchy's father returned to police.

He was working directly under another high-tier policeman called Pierre-Simon Laplace who is today known, ehm, as a top mathematician. Joseph Louis Lagrange was well-known to the Cauchy family, too.


In fact, Lagrange advised Cauchy's father to enroll his son into the Central School of Pantheon. And no, Lagrange didn't want Cauchy to learn some proper mathematics. Due to uncle Lagrange's advices, Cauchy was supposed to learn classical languages and humanities. And he has won many prices in Latin and humanities, indeed. But despite the attempts by Lagrange to direct young Cauchy to this sissies' stuff, he chose an engineering career. In 1802, he scored among top 1% of the applicants to École Polytechnique and was accepted. He had some problems with the military-style rules in the school but he finished the school when he was 18, with the highest honors, and continued with civil engineering at the School for Bridges and Roads.

When he was 21, he already started to work as an engineer as well as a manager at something that Napoleon intended to become a naval base, Cherbourg. He had enough time to work on mathematical papers, anyway. His first two manuscripts on polyhedra were accepted; the third one on conic sections was rejected.

When he was 23, he realized he was overworked and the engineering job sucked, so he returned to Paris. He formally remained an engineer but was working for the ministry of interior and was on an unpaid sick leave etc. More importantly, he would work on higher-order algebraic equations, symmetric groups, symmetric functions, and the other Galois-like stuff (Évariste Galois himself was just an infant at that moment!).

In 1815, Napoleon was defeated in Waterloo – just to be sure, the place is very far from the Perimeter Institute – and Bourbon king Louis XVIII led the restoration attempts. So at the Academy of Sciences, mathematician Gaspard Monge and thermodynamics pioneer Lazare Carnot had to be fired for political reasons while Cauchy could have been hired for the same reasons. ;-)

Cauchy accepted but because a big part of the academic establishment was already composed of politically correct, left-wing activists, the reaction of his peers to his acceptance was harsh. He earned many enemies. In 1815, Cauchy could finally quit the engineering job and take the professor chair at École Polytechnique after Louis Poinsot who left for health reasons. Before that, Cauchy had already proven Fermat's polygonal number theorems. Many liberal activists could have been fired from the Bonapartist school while conservative Cauchy – whom Wikipedia calls "reactionary" – could be promoted.

He was living with his parents when he was 28 but his dad found a wife for him – a babe from a family that published most of Cauchy's writings. They had two daughters. Incidentally, Cauchy had brothers who became lawyers and one of them partly a mathematician, too.

As a mathematical factory, Cauchy flourished in the mid-to-late 1820s because he was lucky to live in a conservative political atmosphere. In 1824, Louis XVIII died and was superseded by an even more right-wing king, Charles X, which made Cauchy even more happy and more productive. He was also teaching at several schools simultaneously.

Things changed discontinuously in 1830. Charles X had to flee and the leadership was hijacked by a non-Bourbon king Louis-Philippe. Riots involving ignorant students took place near Cauchy's home. It had to be really annoying. Cauchy's lust to publish papers went nearly to zero – it's similar to my year around 2005 except that I had to be satisfied with a "relative conservative" in the form of Larry Summers who was finally removed in 2006. ;-)

Cauchy went to exile. In Switzerland, they still wanted him to endorse the new regime. He refused so he lost all positions he had in France. He went to Turin, Italy in 1831 and became a foreign member of the Royal Swedish Academy of Sciences. 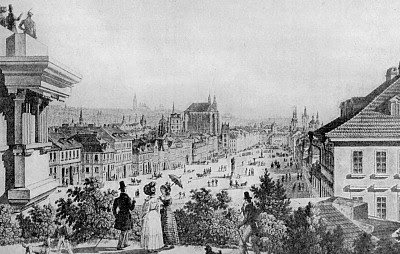 In 1833, Cauchy moved to Prague in my homeland, the Austrian Empire ;-), to become a tutor of Henri of Artois, a spoiled brat from an aristocratic family. Back in Paris, Cauchy was already a bad lecturer and his teaching style resembled that of Sheldon Cooper. These difficulties escalated with young Henri who had no respect for Cauchy, mathematics, or anything of the sort, so even though Cauchy took the job very seriously, it was a disaster. The two main results of this tutoring was that an irrelevant Henri became a life-long math hater; and Cauchy hadn't done any research for 5 years. In 1838, he returned to Paris with his family that had been accompanying him in Prague since 1834.

He couldn't return to teaching – formally because he refused to endorse the new regime – but he badly wanted to be formally recognized by the science establishment in Paris again. He decided to get "there" though the Bureau to Determine the Longitude. He didn't need the oath so he was elected but the king was refusing to approve him for 4 years in which Cauchy was getting no money and had no academic rights (e.g. submitting papers). After that, Cauchy was eliminated altogether and replaced by Poinsot. Note that the opposite replacement was discussed above.

Throughout the 19th century, France was converging towards the separation of state and church, entities that Cauchy always wanted to unify. He became an enthusiastic Jesuit and officer in various Catholic and Jesus Society institutes. His colleagues would have full mouths of non-discrimination and so on but when this top mathematician of the French history applied for an ordinary chair in mathematics, he got just 3 out of 45 votes. Leftwingers have been a biased scum for at least 150 years.

The pan-European revolution of 1848 was mostly good news for Cauchy. The oath was removed from the law and he could regain the professorship again. He died on this day in 1857, sort of respected again. His name is one of the 72 names inscribed into the Eiffel Tower.

In his early career, he made lots of advances about the Appolonius problem of circles touching three other circles; Euler's formulae for polyhedra; he introduced the notion of convergence, and other things. He was quickly becoming a pioneer of mathematical analysis – that's the part of maths dealing with functions, sums, integrals, derivatives, and... (this is why it's more advanced than just calculus – which is otherwise almost the same thing) with all kinds of limits.

He also made contributions to physics – wave mechanics (Fresnel's wave theory) and elasticity (Cauchy stress tensor). Add various things about membranes, vibrations, and so on. I have already mentioned the Fermat polygonal number theorem.

When it comes to mathematical analysis, he really laid the foundations of the holomorphic functions of complex variables, e.g.\[

\] if there are no singularities inside the closed contour \(C\). Seeds of this theorem already existed in 1814; the complete form was given in 1825. He figured out how to compute residues either from limits determining the Taylor expansion; or from the contour integrals. Pierre-Alphonse Laurent was the first man after Cauchy who contributed to this essential mathematical knowledge (Laurent series in 1843).

Cauchy tended to praise the mathematical rigor. Already in 1821, he was working with the infinitesimals – formally infinitely small numbers – but he was the first visible guy to have introduced the \(\varepsilon\)-\(\delta\) gymnastics (games with limits) as the rigorous incarnation of the infinitesimal numbers.

It's an excessive task to enumerate everything that Cauchy has done in mathematics. I find it sort of funny to copy-and-paste a list of insights named after Cauchy:
Let me remind you: this guy was voted as unworthy the chair of an ordinary scholar in mathematics by 42 out of 45 self-described "pro-Enlightment" researchers in mathematics. Certain left-wing portions of the Academia have been rotten for centuries.