BBC2 on Sunday: The Fantastic Mr Feynman to be aired; Telegraph review. Those who pay TV fees in the UK are probably allowed to download the video via this torrent. Well, they can watch it via iPlayer, too.


One of the most colorful and ingenious physicists of the 20th century would deserve much more than a blog entry – so just like in the cases of other giants, I will abandon all attempts to write a would-be comprehensive biography.

Instead, you may watch this 37-minute NOVA interview (above) filmed in 1973. You're also invited to remind yourself about the story of Feynman and feminists (the latter were clearly immensely obnoxious already decades ago). Interestingly, you may look what I wrote exactly five years ago.


Five years is a rather widespread unit of time, sociologically, so all the anniversaries are more or less equally important and round as they were five years ago. In that article, you may also learn that Eugene Dynkin is 89 years old today. Congratulations! May 11th is clearly the birthday of the folks who give us diagrams. ;-)


Karl Schwarzschild died on this day in 1916. He decided to serve in the German army even though he was over 40; I guess that you wouldn't find too many Jews who would be this enthusiastic German patriots after 1945...

The picture below, pemphigus (the rare disease that killed Schwarzschild), may be frustrating so please don't look at it if you're too sensitive. 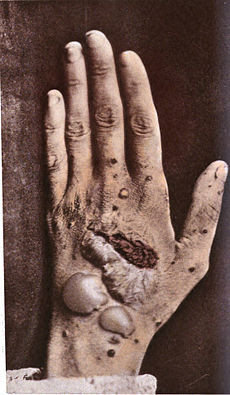 Schwarzschild is most famously associated with the first nontrivial exact solution to Einstein's equations of general relativity. But he would also study optics, photographic materials, celestial mechanics, quantum theory, stellar structure and statistics, Halley's comet, and spectroscopy. According to Wolfgang Pauli, Schwarzschild was the first man who wrote the correct form of the action for the electromagnetic field coupled to charges and currents.

Alexandre-Edmond Becquerel died on May 11th, 1891.

Off-topic: Czechs are the #1 beer consumers in the world. Our superiority has many aspects; for example, women know how to drink beer through their ears.
Luboš Motl v 7:57 AM
Share