An anomaly-like argument in favor of SUSY


The first hep-ph paper today probably got to that exclusive place because the authors were excited and wanted to grab the spot. Andre de Gouvea, Jennifer Kile, and Roberto Vega-Morales of Illinois chose the title


\(H\rightarrow \gamma\gamma\) as a Triangle Anomaly: Possible Implications for the Hierarchy Problem


They point out a curious feature of the diagrams calculating the Higgs boson decay to two photons (yes, it's the process that seemed to have a minor excess at the LHC but this excess went away): while the diagram is finite, one actually gets different results according to the choice of the regularization.

In particular, the \(d=4\) direct calculation leads to a finite result but it actually violates the gauge invariance so it can't be right. It should be disturbing for you that wrong results may arise from quantum field theory calculations even if you don't encounter any divergence.


While this episode doesn't mean that QFT is ill-defined or inconsistent and we actually know how to do things correctly, the finite-yet-wrong result in \(d=4\) surely sounds bizarre. The authors propose a new condition on quantum field theories: this strangeness shouldn't be there. In other words, the wrong, Ward-identity-violating terms in the \(d=4\) calculation should cancel. When they cancel, the \(d=4\) calculation will agree with the correct dim reg \(d=4-\epsilon\) calculation.

The paper suggests that this cancellation is a new general principle of physics that constrains the allowed spectra of particles and fields and that should be added next to the usual triangle diagram gauge anomaly cancellation conditions in the Standard Model and similar gauge theories.

Note that the triangle anomaly diagrams may be blamed on linear divergences in the integrals. Here, the new type of an "anomaly" that should be canceled is also related to the linearly divergent part of certain integrals because they behave differently under the shift of momenta. So even the computational origin of their new "anomaly" resembles the case of the chiral anomaly. In some sense, the "new" anomaly only differs from the well-known triangle anomaly by its replacement of one external gauge boson with the Higgs boson. 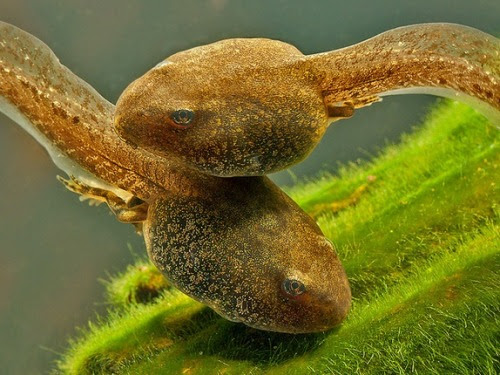 These diagrams that have to cancel are close to some Higgs tadpole diagrams – Feynman diagrams you would use to compute the shift of the Higgs vacuum expectation value (vev). The "tadpole cancellation conditions" are well-known to string theorists but they weren't really discussed in the context of ordinary 4D quantum field theories yet. I suppose that there should be a more natural way to phrase and justify the Higgs tadpole cancellation condition. The condition looks like eqn (36)\[

It's probably true and they probably realize that the new condition is mostly equivalent to the usual unbearable lightness and naturalness of the Higgs' being. However, if you might phrase the condition for naturalness as a version of an anomaly cancellation condition, it would probably be (or at least look) much more inevitable than the usual arguments discussing the hierarchy problem.
Luboš Motl v 8:06 AM
Share