Hooper: XENON100 may have seen DM candidates, too

Update 6/24: South Dakota Public Broadcasting tells us that LUX has been turned on. While the data could be interesting in weeks, don't expect official releases before the final months of 2013. You may also check a 14-minute TED talk on LUX from March 2013.

Update 6/19: This astro-ph preprint says that LUX is already doing science and the results of a 60-day run will be out by the end of 2013, promising to brutally beat any competitor in their reach. Except for this short paragraph, this blog entry was posted on 6/10.

Dan Hooper of Fermilab released an interesting new salvo in the dark matter's war on existence,


Recall that the set of underground experiments that are trying to directly catch the particles of dark matter is divided to two violently competing subsets: one of them, the axis, vigorously claims that there can't be any signal in the other experiments. The leader of this axis is the XENON100 experiment whose claimed constraints are far more powerful than the upper bounds on the cross section published by the XENON100's allies. 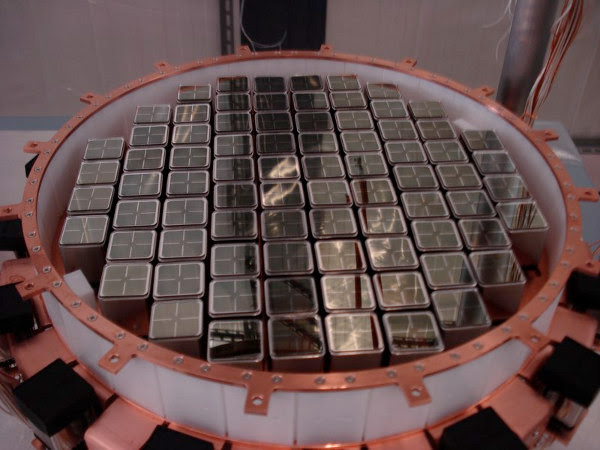 On the other hand, the alliance of experiments that have already claimed to observe a rather strong signal of a dark matter particle, one whose mass seems to be 7-10 GeV (significantly lighter particles than those in the models that dominate in the phenomenological literature but in no way impossible), is apparently getting stronger every month. It seems that we're somewhere around 1943 in this particular war.


At least since 2010, the traditional leader of this alliance has been the CoGeNT experiment that also claimed to have observed the seasons, sort of confirming previous similar claims by DAMA, another paleomember of the coalition.


Juan Collar and N.E. Fields of the CoGeNT Collaboration have previously claimed that CDMS, formerly a member of the "dark matter is not seen" axis, was actually observing a dark matter signal as well, one that may have reached 5.7 standard deviations, high enough to claim a discovery.

This general claim that CDMS was going to join the "dark matter is seen" alliance was confirmed in April 2013 when CDMS announced that the CDMS was seeing three events that looked like a pretty clear 8.6 GeV or so dark matter particle. It means that we have had almost two months to get used to the notion that CDMS is among those who effectively claim that "something seems to be there", a coalition that also included CRESST-II since 2011, which leaves XENON100 alone as a proponent of the thesis that all the dark matter hints claimed by others have to be bogus. This situation makes it natural to think about air raids on Berlin. 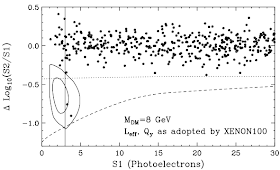 Now, Dan Hooper claims that XENON100, the cornerstone of the dark-matter non-existence claims, is seeing two tantalizing hints of a light dark matter particle, too. The key image looks way too familiar from the recent CDMS charts, especially this one.

On the picture above, once again, you should notice two events that are significantly lower than the bulk of the background events although, for various technical reasons, the XENON100 papers have included them in the background as well. These events seem to be separated by a gap from the group of "clearly background-like events" and they seem to suggest the same mass of a dark-matter particle which would be unlikely if they were parts of some noise. And the mass is compatible with the 7-10 GeV interval indicated by the other experiments.

Based on common estimates, one could have expected up to 50 dark matter particles (which is much more than 2) to have been observed by XENON100. That's why the XENON100 folks are so self-confident in their claim that the dark matter particle with the parameters suggested by others can't exist. Hooper exploits conservative "what if" adjustments of various efficiencies and other boring and mundane parameters of the XENON100 experiment to claim that just 2 events of the sort could still be conceivable.

If this "yes, a particle is there" interpretation is right, then – according to Hooper – the emerging LUX experiment in South Dakota (which is also based on xenon and may be viewed as a superior sibling of XENON100) should see something between 3 and 24 events a month. If the answer is "Yes", then LUX could settle the argument about the existence of the particle rather quickly. Needless to say, dozens of dots near a curve which are sharply separated from the rest would be rather spectacular. 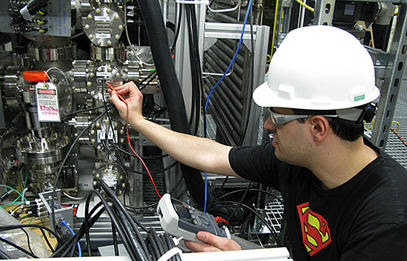 Superman is looking for a glitch in LUX.

The LUX website hasn't been updated for two months but it may be due to the webmaster's laziness or the experimental physicists' having something more exciting to work on these days. L.A. Times ran a fun story about the state of the experiment two months ago.

Incidentally, I must ask you: does any reader who is not Czech use the word "lux" for the vacuum cleaner? If she doesn't, where did we get this word from? Oh, I see, it's the brand called Lux, later Electrolux, founded around 1919. Before that, Lux was producing kerosene lamps, therefore the currently incomprehensible link of the vacuum cleaners to a word for light. ;-)

There was a videochat with the LUX (and Majorana Demonstrator) experimenters today.
Luboš Motl v 8:27 AM
Share