Tons of journalists were recently hyping the warm weather that came to California and other places. Fox News and many others talk about "tied records" and "baked West". 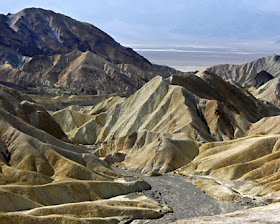 But the real story which is almost totally overlooked is the comparison of the absolute temperature record on Earth and the modest temperatures in recent years that had no chance to match it. This real story is clearly inconvenient to the climate alarmists, one of the most unhinged and dishonest cliques of demagogues who have ever walked on the face of Earth, and journalists many of whom have always been trying to claim that what is happening right now is amazing even if it is not.


The Wikipedia page on weather records tells us, among other things, the highest ever recorded temperature in each country, on each continent, and on the whole Earth. For example, the absolute Czech record is just 40.4 °C – near 105 °F - recorded last August in the West suburbs of Prague. Czechia is one of a half-dozen of countries only that display a record from 2012 or 2013.

However, the global record happens to be recorded in the Death Valley, California – a place in the Mojave desert that is close to the borders of Nevada. On July 10th, 1913 – which will be exactly 100 years ago next Wednesday – the thermometers showed 56.7 °C – that is 134 °F. One may check a weather forecast for that place to see that during the following week, the temperature over there will drop by 5 °C or so.

Because the Death Valley only saw 129 °F during the recent 2013 heat wave, that means that the 1913 world record will have survived for more than 100 years.


Note that the current "extreme" temperatures were still 5 °F cooler than the record temperature set in 1913. This difference is four times greater than the oft quoted temperature increase during the 20th century. If we exaggerate by another factor of four, we may say that relatively to 1913, the year 2013 represents an ice age in the Death Valley.

We're often manipulated into thinking about the warmest ever recorded year according to the global mean temperature. The years such as 1998 and 2005 – relatively recent years most of us remember – win this contest. However, the globe wasn't covered by reliable weather stations just a century ago. On the other hand, individual thermometers have been doing a good job for several centuries. Despite their small number in the past, we may find some really hot readings.

I think that the absolute highest temperature ever recorded on Earth by a thermometer is at least as interesting an extremum as the year with the highest global mean temperature. It's the ultimate Olympic discipline. In spite of this fact, we almost never hear – and talk – about such a thing. Why? Because the 1913 record is just another inconvenient truth, just another fact that challenges the bold assertion that the recent years and decades are unusually warm.

Because most of the people who are spreading and interpreting the weather records these days are biased corrupt jerks who are humiliating proper science, despising the scientitic integrity, and spitting into your face, we are bombarded by selected pieces of information that are meant to convey the misguided picture that there is something unusual going on with the climate these days.

I wonder: How many of you have known that 1998 or 2005 boasts the "warmest year on the Earth" title? And on the contrary, how many of you knew that the absolute temperature record was recorded in the Death Valley in 1913? Concerning the latter quiz question, I will even tolerate the (obsolete) opinion (TRF) that the warmest temperature ever, 58 °C or 136.4 °C, was recorded in Al Aziziyah, Libya on September 13, 1922 – because this alternative changes nothing about the big picture.
Luboš Motl v 8:16 AM
Share