...but the distortion of the markets continues...

Detroit declared bankruptcy according to the Chapter 9 of the federal law. You may see what it probably means for the city and the bondholders and others. We are talking about the "city proper" only – with 700,000 people, it's the 18th largest U.S. city (but the population was 2 million just decades ago). The metropolitan area hosts about 5 million people and is largely unaffected. 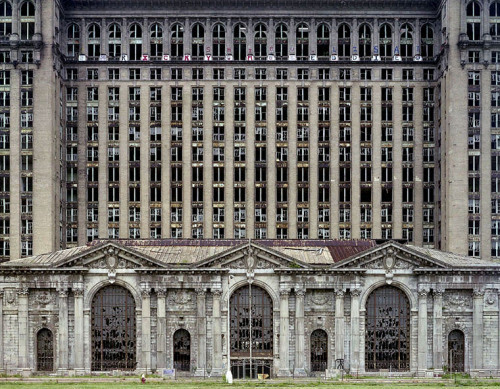 A century ago or so, Detroit was the leader of innovation in the same way as Silicon Valley is today (or at least was several years ago) after Henry Ford would ignite his automobile revolution in the city just decades earlier.

Some popular music was born there – the company Motown (standing for motor town) was founded in 1959. Still, the bankruptcy is no surprise for me because a neighbor on a flight 7 years ago or so has explained to me the ghost-town character of the contemporary Detroit in quite some detail – an hour of zir monologue. Ze told me about the empty skyscrapers and other sad things – I couldn't avoid thoughts about the deathbed of the industrial superiority.

What was going wrong?


First of all, it's clear that Detroit has always heavily depended on the heavy industry which ceased to be the "ultimate core" of the technological progress at some point, perhaps 50 years ago, perhaps more recently. It was destined to shrink a little bit and indeed, the population in Detroit proper dropped to 1/3 of its peak value a few decades ago and returned to the pre-automotive-boom levels of 1910.


Detroit started to be ugly some years ago and people began to move to the suburbs. That turned a specific feature of American cities against the interests of Detroit proper. Unlike the cities in our good old Europe, cities in America are fragmented and what would be called neighborhoods and parts of a big city by us the Europeans are independent municipal entities. So the suburbs were getting the taxes from the former inhabitants of Detroit proper while Detroit proper was in trouble.

I always found it a bit crazy that Cambridge "isn't" a part of Boston, not to mention hundreds of similar examples. You just cross the bridge, much like you cross the Charles Bridge in Prague, and you find yourself in another famous city. It just sounds weird. Most of the time, this would be just an unusual geographic convention that doesn't affect anything. But when it comes to bankruptcies, such conventions do matter.

It seems to me that America should start to abandon this model of separate cities that share a living room, nevertheless. If the people may easily move from one part of the "bigger city" to another and if many of them actually commute every day in between several "small cities" that share the public transportation and other things, it's just crazy that they don't share the public finances as well. Boston should administratively merge with Cambridge and all the other towns of Greater Boston, and similarly in every other U.S. city.

Fine. Back to the reality. The bankruptcy is here and because it means a "reboot", it's a good news for Detroit. If there's a city that needs to be "rebooted", it's Detroit.

I believe that the worsening of the finances and viability of Detroit was helped by some distortions of the markets, unrealistic expectations about the prices, and so on. In particular, I do find it crazy if a skyscraper is empty for several years. If you can't find people who will rent the offices in your building etc., it just means that you must lower the price. It seems to me that some folks were trying to prevent the inevitable gradual decrease of Detroit's importance which is why the discontinuous one that will start today had to arrive.

Similarly, if a city isn't getting enough money for its public services etc., it has to shrink them. It has to reduce the number of people whom it employs and it has to lower their average salary, too. I don't know the exact budgets of the city of course but I do know the mentality of many people and it seems to me that many people were trying to deny the reality.

Now, when the bankruptcy has started, I am sort of shocked by the immensely weak rights that the Chapter 9 gives to the holders of the debt etc. Many people who hold some bonds that were considered the "safest among municipal bonds" will find themselves uninsured – which means that they will receive just a few percent of their previously impressive assets. It's hard to imagine that with this realization, the price of the municipal bonds won't drop and the yields won't go up.

Another thing that protects the bankrupt municipal borrower is the regulation that the bankrupt entity can't be forced to sell its buildings, paintings, and other assets. I find it completely insane. With such rules, "declaring bankruptcy" effectively means "a request to be forgiven the debts without any further problems". Such an arrangement not only means immense moral hazard – an invitation for other cities to follow in the footsteps of Detroit, their role model – and is very bad for the lenders but it will also make it impossible for the city to get really healed. The bad way in which the city officials were managing the city assets has certainly contributed to the bankruptcy and the bankruptcy should be a signal to realize that someone else could be a better manager.

(Of course, I failed to mention the reason that may be the main actual reason behind Detroit's collapse: the city has been entirely run by leftists including unionists since 1962, see the video above. The entitlement programs and government dependency that these stunning left-wing assholes created made the city a near equivalent to the socialist countries with their leading role of the working class. Finally, let me mention one aspect of the situation that MSM totally hide but many of you will say "I see, that's why": Detroit allowed itself to become a black ghetto with 83% of black Americans, leading a hitparade.)

These bankruptcy regulations are wrong, wrong, wrong, and they indicate that even in the U.S., even a lousy irresponsible, clumsy, unhandy bureaucrat connected with the local or global government may always rob or otherwise screw any private entity. In this sense, the difference from Stalinist Czechoslovakia in the late 1940s when companies were nationalized is just a quantitative one. The institutionalized bias against the private entities is self-evident in both cases.

We will see whether at least Detroit will become a better place if the lenders have to be screwed in this insensitively arrogant way.

By the way, Microsoft switched to a (modest) profit after a loss a year ago but a top Microsoft executive already found a better business for himself and his wife: to import Czech (well, Moravian) wine to the U.S. ;-)
Luboš Motl v 7:17 AM
Share