I want to mention three new hep-th preprints. One is on F-theory and two are concerned with the black hole information puzzles.


There exist just a few interesting holonomy groups that manifolds constructed of extra dimensions in string/M-theory may respect. Realistic vacua of F-theory are usually thought of as \(SU(4)\approx Spin(6)\) holonomy Calabi-Yau manifolds that preserve 1/8 of the original SUSY i.e. four real supercharges. 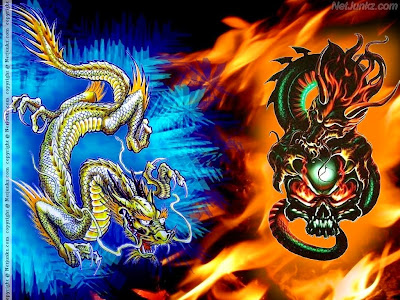 Ice and fire dragons will be discussed momentarily.

However, there exists an even larger possible holonomy group for 8-real-dimensional manifolds that is in between the Calabi-Yau \(SU(4)\approx Spin(6)\) holonomy and the generic orientable manifold's holonomy, \(Spin(8)\), namely \(Spin(7)\). You could expect that these compactifications preserve \(1/16\) of the original SUSY but for \(12-8=4\)-dimensional vacua, you are only left with \(32/16=2\) real supercharges which is less than the minimal spinor in four dimensions. So you actually don't preserve any SUSY at all but the minimum SUSY may be restored if you compactify one dimension from \(d=4\) to \(d=3\).


Now, let us switch to the black hole information puzzles. There are two new papers


Icezones instead of firewalls: extended entanglement beyond the event horizon by Hutchinson, Stojkovič of Buffalo-Niagara ["Slavic paper"]
Cool horizons lead to information loss by Chowdhury of Arizona ["Indian paper"]


To make the story short, the Slavic paper is sort of interesting and worth thinking about while the Indian paper seems rather hopelessly wrong to your humble correspondent.


The illogical thinking of the Indian paper is spread all over the paper but it starts in the first sentence of the abstract (if I neglect the incorrect assertion in the title):


There are two evidences [sic] for information loss during black hole evaporation:

(i) a pure state evolves to a mixed state and
(ii) the map from the initial state to final state is non-invertible.


But these are not "evidences" supporting the information loss. They are just interpretations of what the information loss would mean. The actual evidence supporting these conclusions is Hawking's semiclassical analysis and there has existed overwhelming evidence for more than 15 years that the qualitative conclusions above are invalid artifacts of the semiclassical approximation. In the full theory of quantum gravity, pure states don't evolve into mixed states and the pure-to-pure evolution that actually occurs is invertible.

The unitarity (and therefore invertibility) of the evolution of evaporating black holes is made self-evident e.g. in the specific Matrix theory and AdS/CFT-based descriptions of these black holes. Even if you were a loon who believes that string theory is not "the" right theory of quantum gravity, it is undeniably a theory of quantum gravity in which one can show that in a certain approximation, the semiclassical gravity's predictions are right while the exact theory implies that the evolution is pure-to-pure, unitary, and therefore invertible. The existence of string theory – a counterexample – proves that there can't exist a valid proof that the information loss, pure-to-mixed evolution, or non-invertible evolution is an inevitable consequence of quantum mechanics and low-energy general relativity.

The illogical formulations continue in the paper. The author seems to explicitly claim that he has some evidence that the Maldacena-Susskind or Raju-Papadodimas pictures contradict the invertibility of the evolution, and so on, but he pretty obviously has no evidence to back these claims at all. Instead, these claims seem to sharply contradict some seemingly rock-solid insights that have been around for more than 15 years and the author doesn't seem to care or be aware of them, and so on.

Now, the Slavic paper presents what its authors consider to be some new evidence in favor of the equivalence principle in the black hole vicinity. They think that the black hole evaporation doesn't need any fundamental non-locality in the laws of physics. The evaporating black hole only creates some entanglement but the authors say that the late modes just outside the horizon are not in a bigamous entanglement relationship with the black hole states as well with the early radiation, as paradoxically stated by AMPS. Instead, the late modes just outside the horizon are entangled just with a combination of the two aforementioned "wives".

They also point out that the Unruh-like, namely Hawking radiation (a sort of thermal noise) seen by the accelerating observers living a short distance above the horizon reduces the ability of these observers to perform measurements, especially measurements of quantum correlations. Such observers will see the quantum-like correlations they may observe as disappearing whatever they do (like gadgets undergoing decoherence), therefore diminishing the potential for any entanglement-based paradox. I think that this thermal noise will particularly blur the entanglement paradoxes for modes of wavelength \(\lambda\sim R_{BH}\) which are exactly those used by AMPS to construct what they believe to be a paradox.

It's a potentially important point and an interesting paper. But I still have some trouble with it. For example, they have clearly not switched to the reasoning rooted in the ER-EPR correspondence yet. Why? Because this approach by Susskind and Maldacena blurs the formerly sharp boundary between the "only apparently non-local" entanglement in a local theory on one hand and the wormhole-like "true non-locality" on the other. On the contrary, the authors of the Slavic icezone paper claim that the entanglement created during the process is "purely local" even though it should also have the "non-local geometric" interpretation.

Their "icezone effect" was clearly named in this way in order to sound as the opposite of the "firewall". They tastefully say that quantum mechanics and thermodynamics are completely unaltered while general relativity is modified in the minimal required way to conform. It's sort of surprising that Polchinski in particular doesn't agree with this point. The "icezone" is an infrared effect that makes the increasingly thick vicinity of the event horizon entangled with the early radiation. I don't understand the "exact" definition of the icezone if there is one and I don't understand what's so new about it that led them to introduce a new buzzword but I do think that their basic reasoning is generally compatible with the ideas I believe to be correct.
Luboš Motl v 9:45 AM
Share