In recent 24 hours, lots of media outlets including


discuss the NASA research into faster-than-light spaceships based on "warp drive". The idea is being attributed to Mexican fantasist (rather than physicist) Miguel Alcubierre while Dr (???) Harold White is being mentioned as the most active researcher working on this ambitious project. 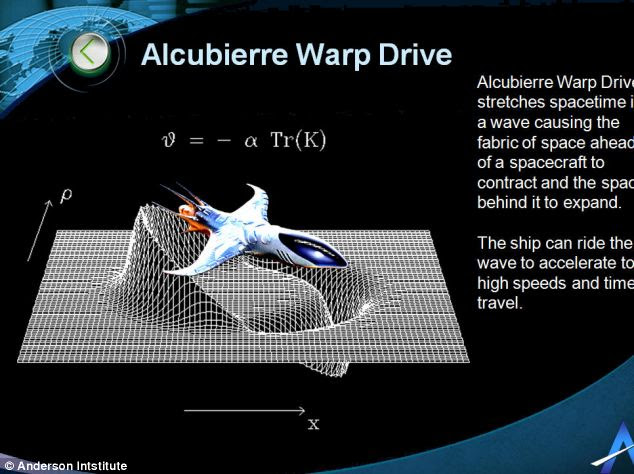 The proposed idea is simple: reduce the magnitude of the space-like components of the metric tensor in front of the spaceship and increase it behind the spaceship. So the space will look shorter in front of you and the general relativistic causal limit will allow the coordinate speed to be greater than it is in the vacuum. Consequently, you will move from one place to another faster than light.


Needless to say, Einstein's 1905 insights known as the special theory of relativity show that such a superluminal motion is impossible. In a different inertial system, it would look like a motion directed backwards in time. And such an invalidation of the usual chronology would produce closed time-like curves with all the "grandfather castrated before the first intercourse" logical paradoxes.


My description above indicates that the modified spacetime geometry looks like a gravitational wave of a sort and these waves can't move faster than light, either. That's really a "constructive" explanation why any would-be warp drive gadget will fail to realize its dreamed about job. The front of the wave can't move faster than light. Moreover, one may see that some negative energy density is needed in parts of the arrangement which is prohibited by the energy conditions linked to the vacuum stability, too.

However, the more universal reason why it is impossible to create a warp drive is still nothing else than special relativity. A problem for most armchair physicists, including Mr Harold White at NASA, is that they clearly seem to believe that the general theory of relativity in 1915-1916 has invalidated much of the special theory of relativity from 1905.

If you have a very large black hole, it creates a very strong gravitational field. For example, the red shift factor goes to zero or infinity at the event horizon. However, a freely falling observer who is much smaller than the black hole may freely fall to the black hole. As long as her spaceship is much smaller than the black hole, she won't even notice that something special is happening near the event horizon; please, assume along with your humble correspondent that there are no firewalls so that this discussion doesn't turn into complete chaos.

The armchair physicists such as the "warp drive engineers" tend to understand this first limiting context in which special relativity emerges from the general relativity. That's why they're talking about the squeezing and stretching space that should allow faster-than-light motion. They're designing this whole story because they are apparently aware of the actual causal restrictions on motion that hold in curved space according to general relativity: massive objects have to move along time-like, and not space-like or null, trajectories.

Imagine that you receive a 50-meter warp drive-driven spaceship and decide to travel from the Earth to the Sun which is 8 light minutes away. Can you get there in 5 minutes? The "warp drive engineers" like to look (at most) at the 100-meter vicinity of the spaceship. Because the spacetime geometry is warped over there, it is possible to guarantee that the spaceship moves along a time-like trajectory despite the fact that it will overcome those 8 light minutes in mere 5 minutes. But is it possible that the spaceship along with the required gravitational field around it moves this fast?

To see that the answer is No, we shouldn't look at the short-distance geometry of the spaceship only. Instead, we should look at the "big picture". Cut the 200-meter vicinity of the spaceship out of your spacetime. What is left is a nearly flat spacetime – millions of kilometers of flat emptiness – because all the hypothetical gravitational fields required to make the warp drive work were confined to the region we have omitted.

But if that's so, it must be possible to use the special relativistic approximation for this "remaining space", too. The spaceship itself (including the gravitational field in its vicinity) is just a local perturbation moving on top of a Minkowski spacetime. This Minkowski spacetime allows us to choose the different inertial frames, just like we always have a choice in special relativity. And because things can't move backwards in time in any of them, it follows that the perturbations aren't allowed to move faster than light, either.

You simply can't get to the Sun in five minutes. You may think about wonderful fantasies what is inside the warp drive spaceship or its vicinity. But before you conclude that the superluminal motion of the spaceship is compatible with the causal restrictions imposed by relativity, you should realize that relativity holds not only inside the spaceship and 50 meters away from it; it holds in the millions of miles outside the spaceship, too. The validity of relativity in the "bulk of the empty Solar System" allows you to classify any details of the inner workings of the warp drive as "irrelevant internal details of a point mass". These internal details of a point mass can't overcome the commandment of special relativity that "thou shalt not exceed the speed of light" when you are moving inside the external space. The internal details of the warp drive just don't matter at all from the long-distance, external observer's viewpoint!

Note that this second method in which special relativity emerges is valid for extreme gravitational fields such as the gravitational fields of black holes, too. If there are black holes flying through the outer space, they still behave just like other point masses from the viewpoint of distances that are much longer than the black hole radii. It doesn't matter at all that some local physics near the black holes' event horizons predicts an infinitely extreme red shift and other dramatic effects.

(A much more interesting potential inner structure of a composite particle than cheap tricks and futile efforts to make it superluminal are potential wormholes or Einstein-Rosen bridges connecting the object with another, faraway object. The validity of special relativity in the bulk of the spacetime implies limitations on the possible communication between the two throats, too.)

So the "warp drive engineers" de facto deny some key principles that special relativity taught us. They're not the only ones. A whole class of the laymen – the loop quantum gravitists and similar fans of "broken physics" – are doing pretty much the same thing very often. Whenever you hear these people criticizing the quantum field theory's and string theory's usage of a spacetime background in a calculation, you are witnessing their misunderstanding of the "survival of special relativity within general relativity".

There may be curved gravitational fields and they may be so diverse and extreme that we may be tempted to say that no background is preferred over another background. And some people also add that the physics of the Minkowski background doesn't apply because it's too special (you usually hear these things in a tendentious sentence mentioning that "it is against the philosophy of general relativity to think about the flat spacetime", and similar junk).

While the first assertion is sort of right – there are many solutions to Einstein's equations and you may treat them democratically – the second assertion is undoubtedly wrong. Einstein's equations still admit the Minkowski flat spacetime as a solution. And whenever the spacetime is "close to the Minkowski space" in any sense, physics of special relativity simply has to re-emerge and, according to any valid theory incorporating the ideas of general relativity, does re-emerge.

In particular, weak enough gravitational waves may always be viewed as waves of the field \[

\] i.e. the difference of the full (curved) metric tensor and the special relativistic (flat) constant metric tensor. The physics of such weak gravitational waves simply has to respect all the restrictions that you may derive from spin-2 waves propagating in a flat spacetime of special relativity. In plain English, the gravitational waves are spin-2 waves in a pre-existing external spacetime. This is not the only way how the identity of gravitational waves may be described but it is a valid way and all conclusions derived from this valid way of looking at things are right and important.