I returned from a few days long trip at the Summer School of Philosophy 2013 in Dub nad Moravou (Oak Upon Morava, and it is Morava, not Morave, for all the Californian nitpickers!).

It's a small township (2,000 inhabitants) beneath a pretty presbytery 10 miles South of Olomouc, the historical and spiritual capital of Moravia (Eastern 1/2 of Czechia). 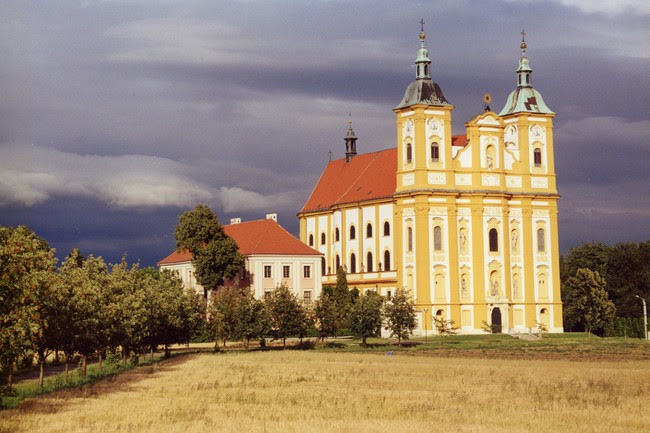 Pilgrim temple of the Purification of Virgin Mary. (Update: Wow, this translation was meant as a somewhat geeky joke – but I later found out that this is actually the correct name of the divine process in English.

A Polish guy was made the manager of the building and he's doing it very well – the Poles have a much closer relationship to God, regardless of His existence (and to the late Pope John Paul II whose pictures are everywhere) than us, after all. ;-) Some young folks organizing the school knew him which is why it was possible for the participants to sleep there etc.


I was there for nearly 48 hours but I only attended 1 day of lectures, including mine. The lecture day on Wednesday started with Prof Petr Pokorný who nicely and generally talked about the language in religions, theology, philosophy, and natural sciences. This sophisticated believer looks really well for his 80 years, by the way.

Assoc Prof Ivan Havel who is much more than just the brother of the late Czech ex-president spoke about the only right – Havel-centrist solipsist – approach to consciousness, especially about the dignified nonscientific analysis of his microdreams and the list of 50 (well, we were shown 5) pictures that appeared in those dreams and that he was able to capture because he made the decision not to forget about those microdreams before they would evaporate.


Your humble correspondent borrowed Mr Havel's laptop to give a talk about relativity, quanta, LHC, Higgs boson, string theory in general (particles as eigenstates of vibrating strings, string revolutions, duality, holography, AdS/CFT), black hole thermodynamics (including a segment on the information puzzle and firewalls), landscape, multiverse, and the comprehensive history and philosophy of each topic, among 30 other topics. You may guess that I was soon running out of time (just 1 hour was reserved plus some extra time for questions and debates) so the talk was getting accelerated close to the speed of light, adding an order of magnitude to the rate of transparencies. I actually knew that this would have to happen but I didn't mind and the talk was successful and ignited lots of philosophical debates about the multiverse, interpretation of quantum mechanics, reductionism, and other topics you could guess.

As you can see, the talks were drifting from the most religious ones towards the most engineering ones and I wasn't at the extreme. ;-) The afternoon culminated in a very ambitious talk by Dr Bohouš Rudolf about quantum computers, including the registers and some algorithms to find the period of functions, addressed to the philosophers most of whom don't really know what a ket is. It was inevitable that they felt that they didn't understand almost anything. But I would praise Dr Rudolf.

It also seemed tome that I would endorse almost everything he said in the main parts of the talk by this inspiring man. This fact made it even more surprising when I learned that he is a staunch advocate of some Bohmian-Everettian hybrid realist interpretation of QM. We had lots of exchanges etc. and I hope that he started to understand what it means that I believe that the picture is wrong and why (and why I call Bohmian and similar theories "classical physics", a class of physics theories that have been excluded for many decades).

I am a bit exhausted and overloaded with online work I couldn't deal with etc.

An apparent critic of string theory on aggressive anti-string crackpots

A critical physicist whom I considered to be an adjunct member of the Union of Organized Anti-String Cranks, a sort of Kook Lite when it comes to string theory if you wish, has offered us a criticism of the aggressive anti-string crackpots in "string theorists have to sit in back...". I surely appreciate her stance, especially because in the past, she may have been under a pressure to become another brainwashed rank-and-file anti-string sheep – I mean her years under Lee Smolin.

What immediately inspired her to write the criticism was the introduction by Christer Sturmark, an irrelevant Swedish anti-religious and anti-top-scientific activist, before a Stockholm speech by Lawrence Krauss, a U.S. cosmologist.

Sturmark mentioned that some months ago, Krauss protested the segregation at a talk he was supposed to give in an Islamic country (women were required to sit in the back). Sturmark's carefully prepared joke said that they introduced a special analogous segregation in Stockholm: string theorists are required to sit in the back (I never do because my corneas don't allow me such a luxury). The joke didn't make me laugh but I wasn't offended because I am more than used to similar people who are stupid as a doorknob. There are several billions of such people in the world and some of them are really, really proud about their stupidity.

It seems clear to me that the comment was an attempt to attack string theorists – for a simple reason. Sturmark was doing whatever he could to lick the buttocks of Lawrence Krauss. Because this mediocre cosmologist (who was almost claimed by Sturmark to be the discoverer of dark energy! Just to be sure: Krauss has made no comparably important contribution in his career) has said some idiotic things about string theory himself, it seems natural to assume that Sturmark (who hasn't studied any physics and has no idea about these matters) decided that the best way to lick Krauss' buttocks is to offer an even more brutal attack on the string theorists.

But comparing string theorists to a group of individuals who can't even piss straight? That's over the edge, isn't it? ;-)

Needless to say, you may imagine that as a person whose background is mostly modest, I am extremely used to frequent interactions with assorted (sometimes very close) people who have no clue about string theory – and in most cases, no clue about physics; science; or rational thinking attempting to localize the truth in general – and I don't demonize these people although they never cease to annoy me once they begin with an anti-science tirade. What is really bad about some segments of the Western "intellectual" society is that it has degenerated so severely that similar stupid anti-string folks may be found at positions where you expect the folks to have a clue about the modern science. I think it's bad if they can't find a better person than Sturmark (who has no degree in physical sciences) to introduce a professional U.S. cosmologist, however lousy the latter may be.

Fortunately, I don't observe these things in my homeland too much. When it comes to the people who are supposed to be interested in these things, of course that I am ready to hear that they have read a book by a Shmoit or a Swholin and they sometimes parrot an idiocy from the text or, equivalently, any statement written in those books (for slower readers: this equivalence implies that everything written in the books is idiotic). Those books didn't sell well in the Czech Republic but of course that I appreciate that their impact is nonzero even here.

But when I am talking about such matters, it just happens that I enjoy a certain nontrivial amount of credibility or political capital if you wish and I try to optimally use the time that may be dedicated to such topics to explain what's going on.

For example, it has become standard that any popular lecture on string theory that I give calmly, meaningfully, and clearly explains that string theory is the only known unifying theory of all forces, the only known consistent theory of quantum gravity, the only known theory that derives the thermodynamic properties black holes microscopically, and so on. I always say that the people have probably heard different statements, but these different statements are incorrect because of several facts [a compressed argument follows]. When people ask about a particular Shmoit, I explain very clearly why he is not a source of information that a decent intelligent person could take seriously, why he shouldn't be counted as an expert etc.

I would say that it always works simply because my statements are self-evidently valid and the proofs may be presented rather clearly. During talks, intellectual dinners, and similar occasions, I haven't really experienced an insurmountable, undefeatable criticism of string theory. In some sense, the fact that I have left the official research industry after recording some not-quite-negligible achievements in it makes my credibility even higher because people tend to realize that the circumstances make me neutral. Even technically, the audiences tend to understand that from an empirical viewpoint, string theory is just a reparameterization of the landscape of quantum field theories, a reparameterization that is more constraining, more well-behaved, and more compatible with Einstein's general relativity. It's really not too difficult stuff to explain. When a crank tries to flood a discussion with a Shmoit-like delusions and he or she is loud, then – I believe – it's a duty of the speaker to be appropriate loud and patient as well to make it sure that others don't miss the right answers because of some insufficient volume or repetition.

Of course, people who haven't even learned how to calculate perturbative QFT diagrams but who try to impress their environment by the Islamofascism-emulating attacks on string theory, something they have absolutely no chance to comprehend, are just stupid worthless jerks, a biological junk of a sort, a nuisance. Of course that in highly official and socially rich situations, I am usually using hyperdiplomatic words to express the same idea. An idiot who attacks string theory in this way may look intimidating but one shouldn't distinguish such an idiot from various aggressive men of any color whom you may meet on the street. It's just ludicrous to pretend that these Sturmarks are our intellectual peers and I have never pretended so. They're aggressive monkeys, inferior individuals. At most, they are demagogues, ideologues, and leaders of guerrilla groups at the bottom of the human society.

Let me admit that what I have found much more frustrating than a couple of aggressive imbeciles of Sturmark's type was the unjustifiable submissiveness of some of the top string theorists. People who are submissive and passive in similar battles are often said to be "nice" but you know, the niceness ends somewhere because too much of it has some undeniable negative side effects. By their being combatively passive, they're threatening the future of the field, they're threatening the funding situation of their younger colleagues, they're creating existential problems for string theory grad students, and so on. Some "nice" string theory who would (almost) never publicly defend string theory (although they could make a big impact) are often just egotist lazy researchers who are unusable in the broader picture, beyond the specialized technical research.

String theorists have surely nothing to be ashamed of. String theory is the culmination of the scientific method as of early 21st century. Among 2,000 active and semi-active string theorists in the world, you will find about 500-1,000 people who almost certainly belong among the 7,000 smartest folks in the world. The string theory community isn't just another rank-and-file discipline of science: it's the smartest part per million of the mankind. I would say that even people who haven't understood the statement in the previous sentence are morons. And it's not just about the people. It's about the results, too. Not every attempt or every year is remarkably successful or revolutionary. But when one looks at the issue from a sufficiently global perspective, he must recognize how impressive insights have already been made.
Luboš Motl v 5:08 PM
Share