Sometimes in January 2014, Ben Bernanke will leave the job of America's key central banker. The replacement is already being looked for. According to polls, current Fed vice-president Janet Yellen (picture below) and ex-Harvard president Larry Summers are the two frontrunners. Arguments in favor of both are so asymmetric that I won't try to compare them. 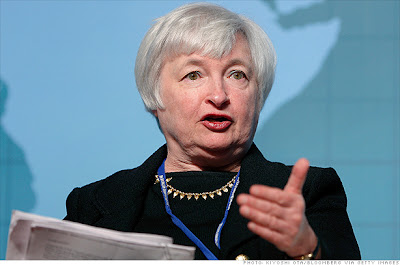 Needless to say, I know Larry in person and we've been on the same side of a battle for some fundamental values at Harvard so his candidacy for the most important economist's job in the world is far more interesting for me than Yellen's. Despite all complaints I could possibly find, I am obviously his supporter. At the same moment, they have a similar background – they're connected with the universities, the Clinton administration, and they're equally Jewish, too.


Alan Greenspan has made that job really influential. It's fun but I don't really think it is such a healthy fact. Ben Bernanke said something on June 20th and the markets saw the greatest drop in two years or so. One question is whether the market participants' reaction was rational. In this case, I tend to answer Yes because similar indications that the stimuli will be abandoned sooner than thought do mean that the equities are less valuable than what you thought a minute ago.


In many other cases, I believe that the investors' reactions are utterly irrational.

But even if they're rational, it's a completely different question to ask whether they're constructive for the economy. I think that prices of things – at least most of them – play a very important role because they quantify the utility and help to allocate the resources to the most profitable places – to places that ultimately bring the optimum "happiness" to the people. Prices, at least not most of the numbers encoded in the prices, shouldn't reflect the mood of a Fed official on a sunny day, his or her breakfast, or whether or not he or she says exactly what he or she means. ;-) They should also not be slaves of the stupid and ignorant investors' group think and mass hysteria but I am not sure whether the Fed officials can cure this particular disease.

I feel that central banks' policies should probably be much more automatic and prescribed than they are – mostly based on some targeting that may take inflation, GDP growth, and even market indices into account – the targeting should attempt to send some combination of these factors (not necessarily all of them) grow at a predetermined nominal rate.

Clearly, this isn't the case in the U.S. where it is normal for the Fed chief to use the argument about the "support of the economy" in rather arbitrary ways to justify whatever he or she needs to do or at least wants to do. This gives the Fed chief a lot of power and this absence of trusted targeting policies is the primordial reason why the words by the Fed chiefs (and even former Fed chiefs) have the ability to drink trillions of dollars out of the equity markets within hours, and so on.

Taking this observation as a fact, it's another question what the candidates might be expected to do, whether it is a good thing or a bad thing, and how it follows from their (claimed and real) successes and failures of the past.

The pundits obviously disagree what is good and what is bad about the actions of the candidates in the past. It's really Summers' past that ignites much more detailed discussions because Yellen hasn't done that much. She's a typical "candidate that irritates almost no one", a negative candidate who wins if the "positive candidate" who really makes people interested, namely Larry Summers in this case, collects more negative than positive votes. She's running as the non-Summers here.

I think that Summers is a very good economist although I am annoyed by some of his big-government, Keynesian, excessive-stimulus, pro-bailout, borderline arrogant socialist proclamations in recent years. However, I would still admit that the huge bailouts he participated in, however misguided, haven't caused any genuine serious problems and they have probably improved many things and protected the world economy from many unpleasant consequences. In fact, if something really bad happens now, I would find it unlikely that it could be attributed to the stimuli that peaked a few years ago.

But Summers isn't "primarily" a big-government economist for me. He's primarily an advocate of the free markets, deregulation, rational allocation of resources and services, a defender of financial institutions and their right to offer complex financial products, and many other things – and those are more important factors that turn him into a warrior on the right side. Various criticisms such as this one in Money Morning are completely misguided. I still remember him as an economist in the Clinton years (the late 1990s) in which I thought that the Democrats and Republicans were equally acceptable to me – two faces of America that always works. Needless to say, this is not how I see American politics today.

It was right and important for Summers to send a memo pointing out that the third world is heavily underpolluted which means that some comparative advantages they possess are insufficiently exploited. It was right for him to promote the dissolution of the artificial boundary between the investment banks and commercial banks. It was right for him to promote the free trade with other countries at various points. And it was also right for him to fight against too big deficits, at least some years ago when he did so. I could write many paragraphs explaining why regulation generally makes things less efficient, why arbitrary bans saying that this company can't do this or that only make it harder and less efficient but the activity ultimately materializes in some way, anyway. I could write essays about the free trade that ultimately helps everyone. I could be explaining why regulators can't be wiser than the actual players in the financial sector. But those who dislike these principles won't listen, anyway.

Also, I believe that Summers is the self-confident enough man who wouldn't be afraid to tighten the policy if it became necessary. Right now, he seems to be an outspoken supporter of quantitative easing and so on which is not hard to understand if the U.S. borrows the money just for 2 percent and something. However, if the yields substantially increased, I am confident that he would change his attitude to an anti-debt person again (although, as a Fed chief, he wouldn't say too much about the fiscal policies). And if the inflation started to run high, possibly out of control, he would quickly morph into an anti-inflation fighter.

I don't know whether those things are true for Yellen because my knowledge of her is infinitesimal. But I just think that the absence of knowledge isn't a good enough background for making someone the most powerful economist in the world so I couldn't recommend her at this moment even though she could be perfectly competent.
Luboš Motl v 9:09 AM
Share