Some climate alarmists were celebrating a transmutation they have never seen in their lives: melting of ice. The ice around the North Pole melted and created a small lake. So wonderful! Mother Nature abruptly stopped the celebrations when it did something else that the climate alarmists couldn't have possibly expected: it refroze the water and the lake disappeared again.

As soon as Alexander Ač sees this picture, he will be re-energized and will run a long story on his blog about a U.S. city that was finally devoured by the ocean.

Shockingly enough, the Earth, the Solar System, the Milky Way, and the Universe survived this melting episode. No doubt, the water near the poles has done a similar flip-flop millions of times in the past. The end of the "polar lake" celebrations doesn't mean that the climate alarmists stopped producing gigatons of insane fantasies. Quite on the contrary. We were just told that


Climate Central, an organization whose mission is to answer every question by "climate change will destroy it", wrote a "study" – apparently taken seriously by the Pentagon – claiming that Boston, New York, Miami, and 1,700+ other U.S. cities will be at least 25% underwater by 2100, if measured by the percentage of the current population.


But the cities on the black list aren't not doomed yet, we're told. If we cut emissions, 1,000 cities on the list will experience salvation and they will be taken off the list.


These claims are comical at many levels. First of all, everything indicates that the sea level rise continues at a rate we've been seeing for several centuries and the sea level rise between now and 2100 will be between –20 and +50 centimeters. Such a change is beaten by the tides that undergo two cycles every 24 hours.

Second, if we were assuming that the research is valid and if we could "save" just 1,000 cities out of 1,700 cities by making brutal interventions into our style of living, I am sure that all sensible people in the world would agree that it's not worth to do it. The number 1,700 undoubtedly has a very large error margin – it's actually many thousands but it's impossible for it to be less than many hundreds – so the "savings" get lost in the noise. If you were told that you will lose 1,700 hair by the year XY but you will reduce the losses by 1,000 if you completely stop drinking alcohol, would you stop? I surely wouldn't and I am no textbook friend of alcohol. After decades of asceticism, you would have no chance to verify that your sacrifice was worth it.

Third, they completely neglect the "backreaction of the people" in the case that the sea level will start to rise. There isn't any sea level problem today so people don't fight with the sea level rise in the U.S. But be sure that if important cities were destined to be submerged, people would react much like the Dutchmen reacted. The idea that the Yankees would just let the New York City to be drunk by the ocean is ludicrous and shows that the authors of the "study" have no idea about the human behavior. 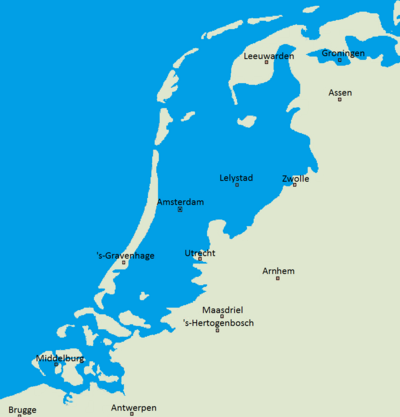 Unlike the previous image, this map shows a scientifically demonstrable territory that would be flooded now if there has been no human activity in the Netherlands.

This diagram shows which part of the Netherlands would be flooded without dykes. Yes, Amsterdam would be close to the middle of the new Dutch sea without a man-made activity. This approximately one-half of the country is saved from the floods. The floods wouldn't be there all the time. But even if you look at the percentage of the Dutch territory that is beneath the sea level today, it is 20 percent.

For a thousand of years or so, the Dutchmen were simply ignoring the sea level. The land was precious for them so they kept it. No doubt, the Americans would be saving many places by various technologies, too. If these technologies were needed at many places, they would become a commodity and the price would go down. Even Prague, with its much more modest experience with floods, has built effective anti-flood walls that were helpful during the recent inundations. Tens of kilometers of a wall that is 5 meters tall and that can resist the pressure lower than one atmosphere is just not such an expensive product if it can save Boston or New York.

If we assume that the sea level rise will be as high as assumed by them (it won't be), there are cities and places that would be saved by such constructions. And there are also towns that would be abandoned. You know, 87 years is a pretty long period of time. It's longer than the average age of a house in our cities and towns. It's no big loss if you abandon your house after 87 years. You will probably do so, anyway: whether the sea level rises or stays the same.

The only dilemma worth talking about is connected with the construction projects that will be decided between 2013 and 2100. Will you stop a project now or in 2050 - because you were just told by Climate Central, an organization that doesn't seem to show any signs of impartiality whatsoever, that the town will be underwater in 2100? I think it would be utterly unreasonable.

It's unreasonable to pay any attention to that now for many reasons, also because a 87-year lifetime isn't that bad. But in 2050, the projections will surely be updated. If the sea level rise continues to be negligible by 2050, as it is now, the 2013 projections by Climate Central will surely be viewed as some silly religious fearmongering by our descendants' monkey-like predecessors in 2013 – after all, many of us see them in this way already today. Climate activists, if there are still some climate activists in 2050, will make their forecasts for the year 2150 or later. If the sea level rise miraculously accelerates in the following decades, I mean before 2050, the distribution of places where people live and build new houses will undoubtedly shift so the submerged percentage of the cities will be much lower according to the distribution of population in 2050 than it is with respect to the current population.

I am talking about an idea that is important in other contexts as well, especially in the context of natural selection and Darwin's theory of evolution. Relatively to the current population (of organisms), minor mutations have odds about 50-50 that they will make the viability of the organism better or worse, respectively. However, once you look at the future population and future species, almost all of them will be descendants of individuals who resulted from a mutation that may be counted as "beneficial". The results are different because the percentages mean different things. Mutations are random – according to the current population – but they lead to unequal consequences which is why the mutations aren't equally represented according to the future population. The emergent non-uniformity is what natural selection is all about.

Climate Central's blokes face a problem. They can't really have their cake and eat it, too. Their forecasts would be manifestly preposterous if they were made about some foreseeable future that may be meaningfully planned – like the year 2020 or 2030. Because they want to make a prediction that assumes that the rate of the sea level rise will start to behave totally differently than what we have seen for centuries up to now, they must reserve a long period of time – like those 87 years – to make the acceleration at least remotely plausible.

But by making the time horizon so long, they immediately make the prediction inconsequential for the current behavior, too. If they tell us about a prediction for such a distant future that we can't effectively "feel" whether the prediction is conceivable or not, it also means that it's so far that we can't possibly "care" about the hypothetical futures, either. So all these exercises are useless and they would be useless even if the predictions had some scientific foundations – they don't.

I am surprised by their suggestion that the emission cuts will only save a modest percentage (close to one-half) of the cities. It makes no sense from the viewpoint of their "cause" because the qualitative outcome is pretty much independent of the mitigation efforts. Needless to say, it makes no sense scientifically, either. If emissions (almost) don't matter, then it means that the recent and near future sea level rise is mostly natural but if it is mostly natural, there is no reason why its rate should suddenly increase by an order of magnitude.
Luboš Motl v 4:15 PM
Share