Two days ago, Al Gore gave an interview to the Washington Post


in which he pretended to be optimistic that unhinged alarmists like himself may still morph from the hopeless dirty losers such as himself to winners. With his characteristic diplomacy, the former future U.S. president compared climate realists to champions of apartheid, to homophobes, and to an alcoholic father who explodes whenever the elephant in the room (more precisely, ethanol in the bottle) is being mentioned which is why his relatives prefer to be silent. 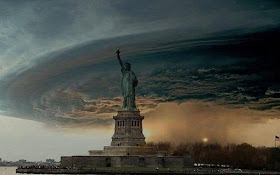 But it was his scientific contributions that led to the most widespread reactions:


Remarkably enough, pretty much all the climate writers on all sides of the conflict agreed – while using various words for the same proposition – that Gore is a shameful lying mongrel who should splash himself into a toilet.

Aside from expected critics such as Anthony Watts, Marc Morano, the Wall Street Journal, the Hill, Newsmax, Politico, The National Review, and many others, even the Washington Post's Capital Weather Gang, The Union of Concerned Scientists and Climate Skeptics' Dogs, and their likes pointed out that Gore's claim was a science fiction that isn't backed by any credible enough experts.


One must still understand that the separation of hurricanes into categories, the Saffir-Simpson hurricane wind scale, is a matter of human conventions. But the experts doing these things are simply not adding any new category. Ultimately, the most important reason is that the hurricanes (and all other local weather phenomena!) are doing what they have always been doing and there's no reason for any change of the classification because we don't observe any fingerprint of any qualitative change, in a striking contrast with the claims by alarmist liars such as Al Gore.

Wikipedia's two paragraphs on Category 6 hurricanes actually tell you pretty much all the facts you need to know to understand the situation.


After some strong enough hurricanes, e.g. in 2005, various people proposed to create a new category 6 for the hurricanes. None of these people has ever been influential or successful. In the current terminology, Category 5 hurricanes include all the hurricanes with winds above 70 meters per second. If you allow me to simplify a table, the speeds in meters per second are:


I hope you are able to translate the speeds to kph (km/h) or kn (knots). For each of the speeds, one may almost reliably predict the normal central pressure (lower than one atmosphere and decreasing with the category!) although it's an independent quantity and doesn't enter the primary definition of the scale.

Sorry that for some categories, the borderline speed is the same and for others, 1 m/s was added. They know how to round it and classify it in the marginal cases although the outcome may often be affected by the error margin, anyway.

At any rate, there is some minimal speed for which a tropical storm may be called a hurricane and the borderline speeds increase by roughly 10 m/s per category. Don't ask me why it's not uniform. But if you do ask me, it's because they wanted to associate the categories with the impact on man-made structures. But the final category (5) includes all the storms above a critical value.

Robert Simpson, a co-author of the Saffir-Simpson scale and a scientist who is now over 100 years old, gives a simple reason why it's a bad idea to introduce a higher category – even though you may find it natural to introduce an arbitrarily high category: he claims that the final category is rupturing buildings independently of the engineering methods that were used to construct it so there's no good reason to finely discriminate. I am a bit skeptical about the claim that the men can't design better materials and structures that simply withstand greater winds than the minimal Category 5 hurricane winds (in other words, I am probably more optimistic about the abilities of the new technologies) but I hope that he has some reasons to make this general claim.

However, there's another reason why the new category isn't even being considered. The number of such "Category 5 hurricanes on steroids" in the record is too small. Among the 35 Atlantic Category 5 hurricanes on the current record, 17 exceeded 78 m/s and 8 exceeded 80 m/s. You see that near 80 m/s, the number of storms seems to be dropping quickly. Similar decrease is seen in the Eastern Pacific hurricanes. Recall that the Northwestern Pacific tropical storms are usually classified with a different terminology than this scale and one talks about typhoons and supertyphoons etc. that have independent definitions.

If you introduced a new boundary near 80 m/s for the Atlantic hurricanes, the classification of Category 5 vs Category 6 would finely depend on the speed (on accidents, roughly speaking), and this extra splitting wouldn't be too useful, anyway. If the borderline speed were much higher than 80 m/s, you would probably be left with no or almost no hurricanes in the new group. If you're looking forward to some very strong hurricanes in their new class and you need some terminology to talk about them, why don't you directly talk about their speed? Try to make people excited while they are waiting for the first 85+ m/s Atlantic hurricane (that would mildly beat Camille 1969 and Allen 1980: you will probably never see one). Such an ad hoc threshold speed surely sounds less sexy than a new category but meritocratically speaking, this topic of the top hurricanes isn't sexy so you shouldn't try to pretend that it is. After all, the strongest hurricanes are remembered not according to their modest differences in the speed but according to their location and impact (a slower hurricane may be much more influential than a faster one) and these things are so dependent on the culture that no objective assignment to the categories could be done according to such criteria (but the classification should be objective so that we know that the distribution isn't changing with the human mood).

An essential fact to notice is that nothing seems to be visibly changing about the distribution of the tropical storms and hurricanes into the categories. Saffir and Simpson did some work in evaluating the data and dividing the hurricanes into useful categories and because the statistical data is pretty much the same (but more extensive) today, they would probably end up with the same results today, too.

None of the hurricane data shows a clear, statistically significant trend. Statistically insignificant trends may be positive and negative depending on what you precisely quantify and how. Theoretically, there exists a good fundamental reason – often emphasized by Richard Lindzen – why one should expect fewer hurricanes and weaker hurricanes in a warmer world (which we're very slowly entering, according to some claims and according to linear regression in the last 30 or 100 years): a warming occurs primarily in the polar regions that were and still are much colder than the equatorial zone (due to various polar e.g. ice-albedo feedbacks) and that's why the globally widespread warming trend also means that the polar-equatorial temperature difference decreases. But this difference – locally speaking, the gradient – is one of the main causes that power the storms (not only tropical storms) so if it goes down, so should the frequency and strength of the tropical cyclones.

It's plausible that someone has built a climate model that produces the opposite result but it's almost certainly an artifact of some numerical (or conceptual!) defects of the models (if I avoid justifiable accusations of fudging). Because there doesn't exist any theoretical, computerized-oracle-independent argument why the hurricanes should be getting stronger or more frequent, we should use Occam's razor and ignore such a complicated extra hypothetical trend until we have a reason to think otherwise.

At any rate, no one in the world of experts is proposing anything such as a sixth category for the hurricanes. It's too bad that Al Gore began to think that any lie that goes in the alarmist direction is excusable. I sincerely hope that his lying dirty mouth will start to be broken into many small bloody pieces whenever he says something comparably outrageous so that by the time he possesses one last tooth, he learns to speak the truth, at least sometimes. Unfortunately, most Americans are cowards who are afraid of beating scumbags such as Al Gore on the street while a minority of Americans even sympathizes with similar scumbags. Yes, I sort of preferred the America from the Westerns where Category 6 assholes such as Al Gore are finally shot by the heroes.
Luboš Motl v 12:44 PM
Share