The following insights look particularly ironic and make me think about the prescientific way of analyzing Nature.

One of the most omnipresent chemical compounds in Chinese herbal medicine have been aristolochic acids (AA) which are found in wild ginger, pipevines, and other long tubular flowers. AA I is almost omnipresent in Aristolochia species. 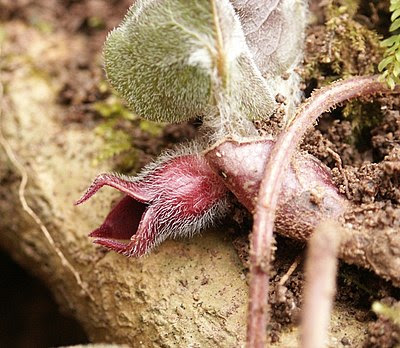 This European Asarum edition of wild ginger almost looks like a tumor itself.

The three hexagons plus a pentagon in the chemical formula don't look particularly healthy to me. ;-) But just to be sure, not all polycyclic compounds such as AAs are aromatic; aromatic compounds are only those whose ground state ket vector is a linear superposition of the formulae with several distributions of the single and double C-C/C=C bonds so that it's more accurate to indicate the alternating bounds by a circle inside the polygons. This allows the molecule to stregthen the binding relatively to the non-aromatic case and this also tends to make the compounds unhealthy. It's sort of remarkable that this class of organic compounds with an interesting two-state quantum mechanical effect were already named by August Wilhelm Hofmann in 1855. Some people are able to get very far in quantum mechanics without even knowing the symbol \(\ket\psi\). ;-)

For quite some time, the compound has been known to be carcinogenic – I didn't know about it – and probably more efficient in causing the disease than the UV radiation and smoking. As such, it's been banned in many Western countries. The tumors appear in the urinary tract, kidneys, and liver. The compound is probably behind the Balkan endemic nephopathy (nephro- means "related to kidneys").


by Song Ling Poon and dozens of Taiwanese and Singapore-based co-authors was apparently able to identify some genetic fingerprints of the mutations caused by the compound which may turn out to be very useful.


The Chinese shamans and their consumers, much like many other pre-scientific cultures, must have been able to identify certain, sufficiently strong and speedy, influences of the plants. Without science as we know it, many cultures – and even animals that lived long before humans – must have been able to identify poisonous plants as well as those that are helping you quickly enough (at most days?) in certain conditions.


But I would say that whenever the impact was delayed by more than weeks, they must have been lost. Their memory wasn't good enough. I suspect that they also believed that no effect that took longer than two days (needed for the food absorbed through the mouth to get out of your body via another hole) could ever be relevant. They obviously didn't evaluate the consumers of their ancient drugs and other remedies statistically, and so on.

So I guess that many such herbal medicines may have determined – at least approximately – which spices and other plants have antimicrobial properties because this effect may be fast and visible. On the other hand, it's likely that carcinogens were completely invisible to the primitive methods of the ancient Chinese folks and other sufficiently primitive tribes.

In some cases, the plants may have been helpful by accident. In most others, they neither hurt you nor help you. And there are apparently also cases in which you may be recommended a plant that is downright harmful – and very harmful, in fact.

The latter situation is particularly unfortunate and you may blame it on the low statistical significance or speed of the impact of the plant. Science has learned to identify all these things systematically. More importantly, the ancient believers viewed a story told by another human (an older relative etc.) to be at least equally important as your direct empirical experience. Science has learned to totally ignore the stories.

So while the ancient people wouldn't notice (with the reliably correct sign) a plant unless it "immediately and visibly" helps you or hurts you, science got good in identifying various "signals" that are hidden in the noise. We could say that the modern medicine research got "too obsessed" with the asymmetries. This obsession could be described as the "opposite bug" than what the Chinese herbal medicine has suffered from.

What I mean is that we can see lots of medicine research papers in which some 2-sigma or so signal is spotted and despite this very low confidence level which makes it extremely likely that the apparent signal was just a fluctuation, such papers often penetrate to the general "scientifically literate" culture or even to further research papers.

For example, my reading of the literature indicates that there exists no really solid evidence (at least 5 sigma, for example) that the second-hand smoking is harmful (in particular carcinogenic). If the original 2-sigma-like papers claiming that the passive smoking should be harmful were right, we would already be surrounded by totally convincing papers with much higher confidence levels because the research and surveys have grown by a huge factor from the first "hints" that the passive smoking should have been harmful. Five-sigma papers should be almost trivial to encounter these days. But they seem to be absent, reinforcing the opinion that the original claims were bogus and the health influence, if one exists, is far weaker and more subtle than originally thought.

Correct me if I have missed some important developments.

Of course, the second-hand smoking is sort of a "politically interesting" topic because everyone is either a smoker or a non-smoker and cares about the social interactions with the other group and the groups' "human rights". But there are arguably many "politically neutral" wisdoms that don't irritate anyone but that are still incorrect even though many people still believe it.

It could be interesting if someone were able and willing to cut through the vast medical literature and simply pick the results that have only been achieved with robust methods and at a confidence level that is appropriate in hard sciences. Otherwise while we've learned many things that were misunderstood by the ancient Chinese healers, we may still be believing lots of superstitions that will only be corrected by a more intelligent mankind in the future.
Luboš Motl v 1:29 PM
Share