Getting ready for a war against Syria

...robust Czechoslovak weapons unlikely to resist for too long...

The civil war in Syria sucks, like most civil wars. The rebels aren't saints (and Russia accused them of using sarin gas a month ago) but it's the Syrian government that may be expected to behave more responsibly. Given the strong indications that chemical weapons have been used, it's not surprising that the U.S. forces and allies are thinking about an attack that may begin as early as on Thursday. Such a reaction of the West is understandable but needless to say, the West may be playing with fire. And with Czechoslovak weapons, too.


An attack against the regime of Assad Jr is likely to be actively led by the U.S., somewhat emotionally supported by France, the next most hawkish Western nation, perhaps by the U.K., and more passively approved by pretty much every Western country (our new president Zeman, an outspoken critic of the Muslim world, immediately reported he wants to send troops to the Golan Heights i.e. to Israel's border region near Syria, in order to secure the superpower status of the Czech Republic and to speed up the incorporation of Assyria into Naphtali's Realm). In contrast with the peace rallies before the second war in Iraq, a decade ago, the peace activists don't seem too excited about protests because a war is raging in Syria, anyway.

Russia and China oppose the attack but these countries are hopefully not terribly involved in the situation because things could get really messy at the global level. (Saudis are offering oil incentives to Russia if it abandons Syria.) Meanwhile, most countries in the region, including Turkey, Israel, and Saudi Arabia are likely to happily support the attack on Syria (Israel needs to pretend lots of reticence that is probably fake). Libya is slightly against the attack but it won't actively defend Syria.

The most important regional supporter of Assad is obviously Iran and every responsible planner must be ready for the option that the expected American war on Syria will quickly grow into a war against Iran.


This is a Czech blog so I can't resist to semi-proudly ;-) mention a specific dirty role that my homeland – well, mainly its historical predecessor – would be playing in the war.

It just happens that no one else than Syria under Hafez al-Assad (the current leader's dad who was at the top between 1963 and 2000) was Czechoslovakia's most important non-European business partner during much of the 1970s and 1980s. Assad was a clear left-winger of his own sort and Czechoslovakia was his nation's favorite exporter.

The 1975 picture at the top shows the last communist Czechoslovak president, Gustáv Husák (left), teaching al-Assad how to blow the traditional Bohemian glass, at least a simplified version of it. Al-Assad must have been a good student. He also visited Prague in 1985. The reverse visit by Husák to Damascus occurred in 1979. 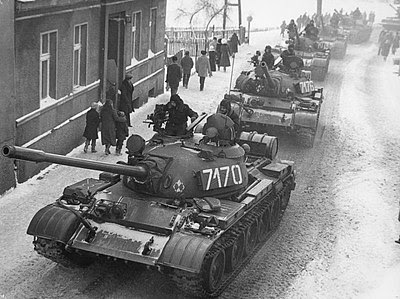 You may ask what was the most important category of industrial products that Czechoslovakia was sending to Syria. Well, yes, you shouldn't be surprised. Czechoslovakia has always been a great power in weaponry – and yes, my hometown used to play a very important role in that sector as well, but especially 100 years ago – and the answer is therefore weapons. To mention particular products, Syria has bought numerous T-55 tanks (shown on the picture above, during the martial law in Poland; also produced in USSR and Poland) and Aero L-29 Dolphin/Maya jet training aircraft (below; purely Czechoslovak). 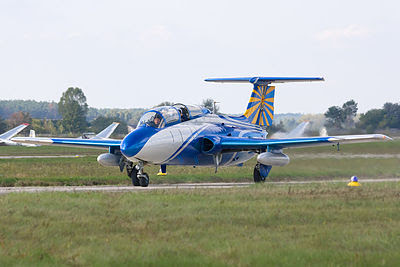 At some moment, the Syrian debt with respect to Czechoslovakia grew to $0.9 billion which is a lot of money, especially because of the letter "B" at the beginning. All the debt has been repaid a few years ago. That's a good thing for our coffers because Syria could very well become broke this Friday. ;-)

Needless to say, the Czechoslovak-Syrian relationships changed from the friendly blowing jobs shown at the top to hostile interactions when Václav Havel took over after the Velvet Revolution. Al-Assad Sr has been reported to be properly pissed off by many words that Havel sent to the former ally in the Middle East. Well, Al-Assad Sr stopped communicating with my country but in 2001, when his son was already activated, the communication got restored and the new agreement about the repayment of the debt was signed in 2005 (a part of the debt was forgiven, anyway).

Omnipol, an existing Czech company that is selling similar weapons, is clearly doing some business with partners connected to Syria even these days. (And a few years ago, Wikileaks showed that the U.S. was anxious about these Czech exports in 2006, too.)

I don't know whether it's a part of a plan but our products are able to get to Syria indirectly. For example, some RPG-75s, Czechoslovak single-shot anti-tank weapons from the 1970s, were spotted in Syria this spring. The immediate country that exported it there was Croatia but it's still our weapons. A version of RPG-75 for schoolkids ;-) (or at least it says so) is shown on the picture above.

One must realize that they may have billions of current dollars worth of weapons just from Czechoslovakia which was surely not the only source of their weaponry. That's a lot of gadgets that are able to harm U.S. (and, less likely, allies') forces. Don't get me wrong: I do think that it should be straightforward to beat the Syrian regime, at most in weeks.

However, once again, I sincerely hope that the military planners in the U.S. know what to do when Iran responds in a dramatic way and so on. I also sincerely hope that the traders won't react too hysterically (over half a percent down on Dow Jones; the folks are clearly not calm). It's just Syria and if there's going to be mess in that country, it won't be much different from what is already happening over there now while the potential for a rosier future will be substantial.

A war against a coalition of Syria and Iran could be lengthy, dramatic, and energy-consuming. On one hand, this coalition would be stronger than Iraq – and the war in Iraq was a bit nontrivial by itself. On the other hand, some regional allies could fight against Syria and Iran as well which could make it easier for the West. Do we really know that the benefits exceed the costs – on a human, economic, and political level? Isn't it a pity that the price and value of such an intervention and its consequences for the people in Syria, in the Middle East, and in the rest of the world hasn't been really publicly discussed in the West? I think it is. At any rate, if there's gonna be an attack against Syria, I wish the Western forces a lots of good luck in ultimately bringing some humanity to that country. I say "ultimately" because I don't think that wars can ever make societies more human "immediately".

Love in a Baguette by Mr Xindl X and Ms Olga Lounová, a desirable outcome of the war in Syria: a love song in McDonald's. The guy complains that he has to buy things he didn't want and to supersize them, too – just because she has a crush on the clerk. Aside from several related economics theories, the song also argues that the supply determines the demand. Currently there are no McDonald's restaurants in Syria, one of the signs of the inhumanity of the regime. I won't show you the beheadings and similar horrors because this blog has some taste.
Luboš Motl v 4:47 PM
Share