Imagine that the Universe is not expanding

Wetterich's cosmon claimed to be an alternative to the Big Bang singularity, inflation, and the recent apparent expansion 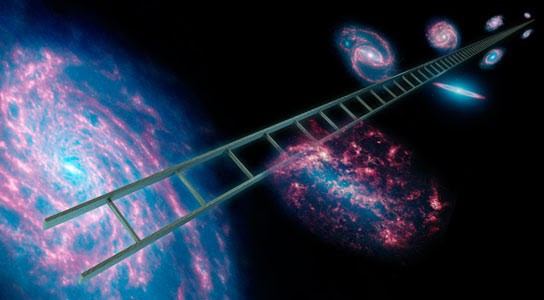 Most papers trying to replace the usual cosmological concepts such as dark matter and dark energy by something entirely different may be shown to be wrong within minutes. As I learned from a Czech server called osel.cz ("osel" is a horse-like animal known as an ass: I don't know of a shorter way to explain that it's not the other ass), a rather achieved cosmologist Christof Wetterich posted an unusual clever yet apparently equally provoking preprint to the astro-ph arXiv at the beginning of this month:


Be ready for a wild ride: the proposed model claims to explain all the known observations, eliminate the Big Bang singularity, account for the patterns we attribute to inflation, the radiation-dominated era, and the matter-dominated era. And Wetterich also wants to boast that his construction "produces" the arrow of time – as if cosmology were needed for that (but that didn't make me stop reading). A single scalar field – the cosmon – may do all these wonderful things, the gospel say.


The idea of a time-dependent Newton's constant (variable strength of gravity) goes back to Jordan and Dirac. The latter man tried to use it to explain the existence of vast and tiny parameters in the Universe. The explanation doesn't really work, especially because dimensionless constants of physics are measured to be really constant.


This is a field – a minefield, to be more precise – that is full of failed and dead bodies. You don't want to go through all these failures because there are too many. This Wetterich guy wants to avoid the basic traps by assuming that the Planck mass is changing with time but the masses of all objects are changing at the same rate so the ratios remain fixed.

Such a claim is already a bit provoking to me because one always has the freedom to define the masses in the Planck units so with the prescription described in the previous paragraph, we may say that nothing is changing in the Planck units. Well, on page 4, he's a bit more specific about the role of his cosmon field \(\chi\) ("chi"). The effective action is\[

\] To be authentic, I retyped the expression as he wrote it although the sign of the determinant of \(g\) seems problematic and so do other things. He considers two basic models, (A) and (B), which make the following fixed choices:\[

\] The coefficients in the kinetic terms \(K(\chi)\) are allowed to vary throughout the paper to adjust the models.

Well, you see that Newton's constant depends on the cosmon in some way. The cosmon has some field-dependent kinetic term and some potential. The first thing that comes to my mind is that one could rescale the metric and nonlinearly redefine the cosmon field so that he would effectively eliminate up to two of the three functions above. So unless there are some global constraints or inequalities, wouldn't it become just an ordinary GR coupled to an ordinary scalar field with some potential?

I am confused by this basic point but it's probably because I have only been reading the paper for a few minutes so far. If and when I spend an hour with it – or if a more experienced reader offers his or her thoughts and observations – chances are that all the uncertainty will go away and the ambitious claims by Wetterich will turn out to be either strictly viable or demonstrably wrong.

Which way it is? ;-) I am unlikely to learn the answer tonight because I want to watch the second soccer match Maribor [SI] vs FC Viktoria Pilsen [CZ]. "Our" Pilsner team is likely to win in the aggregate match after the 3-to-1 victory at home last week which would mean that it will earn over $10 million and penetrate to the standard group of the UEFA Champion League for the second time.