Sean Carroll has unlocked the quantum chapter from his "Eternity" book,


which I found better than expected despite its misleading comments about the "collapse", "its" relationships with the "arrow of time", the meaning of the "Copenhagen Interpretation", the "many worlds" as the "leading alternative contender", and many other things (he omits Bohm etc.). Carroll's text is flawed in different ways than e.g. Brian Greene's musings about the interpretation of quantum mechanics but I wouldn't say it's "more flawed". I am still not aware of any popular presentation of the foundations of quantum mechanics that is done right.


Now, Dennis Overbye wrote quite an informative and long The New York Times article about the black hole firewalls and the ER-EPR correspondence,


A Black Hole Mystery Wrapped in a Firewall Paradox.


Overbye confirms his status as one of the world's best popular science writers who focuses on theoretical physics. As a reader, you are reminded about some of the intellectual stories of Einstein and Hawking as well as the interactions that made various people confuse each other about the firewall fallacy on the West Coast. Susskind whose opinions resembled a yo-yo hasn't changed his views for several months, we're told.

Incidentally, Bousso has a new paper about the firewalls and if I judged the situation according to everything that is written in these still equally confusing if not crazy papers (Bousso claims that there's a firewall even when the black hole is very young – a brutal violation of locality), I would have to agree that they're as confused as 40 years ago – something written in Overbye's article. In the real world, the claim that things haven't become much clearer in the last 40 years is an outrageously crazy lie. At least my understanding of all these questions is much better than even 15 years ago – perhaps because I don't change my mind whenever someone writes some new bullshit. 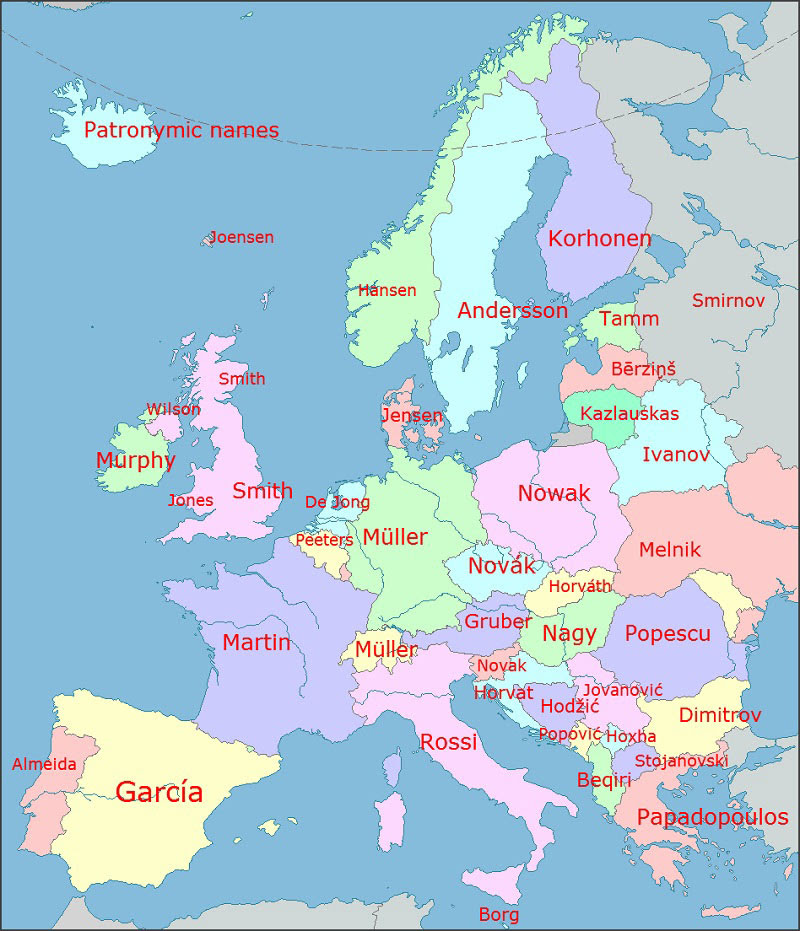 Most frequent surnames. Click for all 40 informative and funny maps that you will ever need. Via the Pirate of Prague.

There will be a workshop in Santa Barbara about these matters. It's organized by Don Marolf. He also posted his own new paper arguing that holography doesn't depend on strings. As far as I can see, it's a sloppy tirade full of unsubstantiated claims – well, the claims are supported at most by a vague analysis of something that has been analyzed very accurately since late 1997. We know pretty much exactly what the bulk stringy objects – strings and branes and black holes etc. – mean in the boundary CFT, when they matter, when they can be neglected, which properties of string theory are important and unimportant for various derivations (e.g. of black hole entropy), and so on. It's hard to imagine how a superficial paper such as Marolf's could be considered as anything else than a redundant, outdated, not quite competent, low-quality addition to the literature.


Finally, Jester at Resonaances published a new blog entry after 4 months or so (delay caused by "work, travel, frustration, depression, and sloth").

I agree with all of his "matter of fact" claims but I don't share his emotional reaction at all.

Jester says that since the 1930s, physicists – we would say phenomenologists – would be looking towards a holy grail, a high-energy scale, which always happened to be the electroweak scale. New physics had to be added to make the theory work. Now, the theory at the electroweak scale (the Standard Model) seems to be completed and consistent as a renormalizable quantum field theory so there's nothing else to "inevitably expect" at that scale – and the LHC confirms that except for the Higgs, this scale isn't "overflowing" with tons of new physics. So even though it's still likely but not certain that there's new physics such as SUSY at a nearby scale, the physicists have to look at another scale to achieve a certainty about new physics but he doesn't know which one. 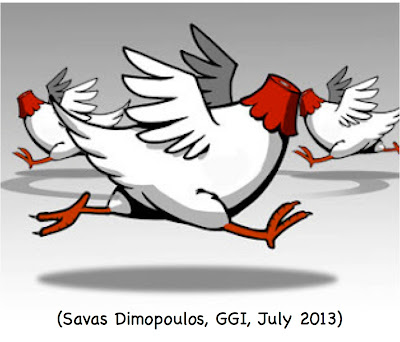 So this is how the situation looks to Jester – and Savas. No clear direction for progress, they think.

Jester's claims about the physics are true but his reasons for frustration are inappropriate. What he dislikes is that regardless of the energy of the next (realistic) collider, \(30\TeV\), \(100\TeV\), or \(1,000\TeV\), we can't be quite sure that the collider finds new physics. I agree with that but I am not shocked by it in any way.

It has been clear to me that the Standard Model was a complete renormalizable theory – a theory that can be extrapolated to really, really high energy scales – since I was a college sophomore. (In the following year, I began to attend QFT courses: buy the book on the electroweak theory by my major undergraduate QFT instructor.) So of course that once all the necessary pieces of this Standard Model are established, there is no other new physics testable at the accelerators that is "inevitable" in an energy range that is "guaranteed".

One could say that I was solving similar questions as Jester but it was 20 years ago. Is that the first time when Jester realizes that the Standard Model is a complete renormalizable QFT that doesn't need extra additions? We know about some likely additions linked to the Higgs stability, hierarchy problem, dark matter, inflation etc. (Jester discusses them as well) but we're not guaranteed that they're accessible by any particular realistic collider.

Well, I have always even shared Jester's strategy to find an energy scale below which new physics is guaranteed. And I found it (so did Max Planck 100 years earlier although he didn't quite understand the physics of the scale). It's the Planck scale. New phenomena have to occur at the scale \(10^{19}\GeV\) or lower (it may be much lower in models with large or warped extra dimensions but the true fundamental scale can't be higher).

It would be fun if the scale could be accessed by direct experiments except that it seems unlikely and we have always thought it was unlikely. So why should we be "negatively surprised" now? I, for one, don't care much (and have never cared much) that Nature has made the scale so high that it's not accessible by our particle physics experiments. (Of course, the gap between the scales has to be this high because it's ultimately needed for the existence of life. Evolution of life requires lots of sunny days. Stars are long-lived because they contain many nuclei that may be burned and the number of nuclei ends up large because gravity is so much weaker than other forces and pressures so lots of nuclei are needed for the gravity to become significant and compensate the repulsive pressures.)

The Planck scale is the scale where my thinking about fundamental physics – and the thinking of any top-down theorist – begins. From this inaccessible scale, one may dig deeper perhaps down to the experimenters' scales but it has always been clear that the true fundamental scale where important things have to exist is the Planck scale. (Stringy and grand unified theories make it likely but not guaranteed that there are some interesting additional phenomena at scales slightly, perhaps 10-100 times, lower than the Planck scale, too.) Everything else are just optional islands alternating with optional deserts. You may demand that there is some land in the ocean at each 100 miles (and even claim that gaps in the ocean that are longer than 100 miles prove that geography is no science because you can't swim there) except that the rules of geography don't have to respect your demands. The existence and inner workings of Eurasia is mostly independent of America so – even though Jester may find it surprising – no one is guaranteed that there has to be an America at most 100 miles from Spain.

So what the confused headless hens show is just a minor thing – that the dogmatic bottom-up, direct-experiments-based view on fundamental physics isn't a sustainable strategy to keep the research going. All the people claiming that physicists are only allowed to think about things that must have consequences for particular near-future experiments have always been as deeply misguided as the Spanish Catholics who wanted to prevent Columbus from trying to sail to another continent around the round globe.

One has to think about topics that are behind the currently observable horizons if he wants to make real progress! We could say that the bottom-up paradigm is complete and dead and it's time for every single phenomenologist to learn some string/M-theory because this is the new physics that is guaranteed at a certain well-defined scale. Otherwise one will be stuck with increasingly bizarre speculations based on a wishful thinking. The hen cartoon is right: if you're chasing a new visible island of new physics that has to be visible from your place, you will lose the sense of direction and your search will be chaotic and unguided. Look at Jester's words:


So, while pushing up the energy frontier in accelerators will continue, I think that currently searching high and low for a new scale is the top priority. ...

\] It's a fact that you're not guaranteed to find anything at any particular scale. It's like looking at the Atlantic Ocean with your binoculars. Are you guaranteed to see hints of a new continent, America? Isn't it better to be more courageous and abandon the totally unjustified assumption that your left leg should permanently stand on the Iberian peninsula? Columbus did so. His group was sailing for a few thousand kilometers – he didn't exactly know how much was needed – and he discovered a new continent. Chances are that you can't discover a new important land without getting wet!

Just to be sure, I think it's slightly more likely than not that SUSY will be discovered at the LHC in 2015 and the probability is comparable to one-half that the dark matter underground experiments will agree about a dark matter particle. But none of these probabilities is "well above 99 percent", for example. Indeed, we're not guaranteed that any particular experiment will discover these new things. There's no scientific or rational reason why we should be guaranteed that. And there's no reason for science to stop just because we're not guaranteed such things.

Again, it's time for HEP non-experimenters to (at least partially) switch to the top-down thinking unless they want to increasingly resemble the headless hens.
Luboš Motl v 8:22 AM
Share