16 out of half a billion: elite Calabi-Yau manifolds with a fundamental group

Heterotic compactifications represent a convincing – if not the most convincing – class of superstring vacua that seem to pass the "first great exam" for producing a theory of everything. A week ago, I discussed \(\ZZ_8\) orbifolds but now we return to smooth Calabi-Yau manifolds, the nice creatures you know from the popular books and from the girl who has a 3D printer.

The reason is a new hep-th paper by He, Lee, Lukas, and Sun (of China, Korea, and Oxford):


These 16 manifolds are really special; they seem to have something that the remaining more than half a billion of manifolds in a list don't possess.


What is it? I will answer but let me begin with a more general discussion.

Calabi-Yau three-folds are used in the heterotic string model building and they're 6-real-dimensional shapes whose holonomy group is \(SU(3)\), a nice midway subgroup of the generic potato manifolds' \(O(6)\) holonomy. (Holonomy is the group of all rotations of the tangent space at any point that you may induce by the parallel transport around any closed curve through the manifold.) They come in families – topological classes. The most important topological invariant of such a manifold is the Euler characteristic \(\chi\).


For Calabi-Yaus, the Euler character (let me shorten the term in this way) may be written in terms of more detailed quantities, the Hodge numbers, as\[

\] where, roughly speaking, the two terms refer to the number of topologically distinct and independent, non-contractible 2- and 3-dimensional submanifolds, respectively. In two different ways, they generalize the "number of handles" on a 2-dimensional Riemann surface. Let me assume that you know some complex cohomology calculus or you're satisfied with the sloppy explanation of mine.

These Hodge numbers \(h^{1,1},h^{2,1}\) also dictate the number of moduli – continuous parameters that can be used to deform a given Calabi-Yau manifold without changing its topology. Each Calabi-Yau seems to have a "mirror partner" (the relation is "mirror symmetry") that acts as (among other changes) as\[

\] on the Hodge numbers and (as a consequence) on the Euler character. In total, \(30,108\) distinct Hodge number pairs \((h^{1,1},h^{2,1})\) are known to be realized. The number of known Calabi-Yau topologies is therefore at least equal to this number of order "tens of thousands". The plot is nice and reproduced many times on this blog and on Figure 1 in the paper. 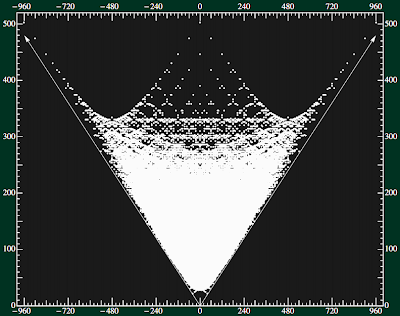 The largest Hodge numbers appear in the "extreme" Calabi-Yaus with \((h^{1,1},h^{2,1})=(491,11)\) and its mirror with \((11,491)\). Those produce \(\chi=\pm 960\) which is the current record holder and the probability is high (but not 100 percent) that no greater Euler character is mathematically possible for the Calabi-Yau threefolds (the basic "pattern" of the picture would seem to be violated if there were larger Euler characters). In this sense, heterotic string theory predicts that there are at most \(480\) generations of quarks and leptons. The prediction seems to be confirmed experimentally. ;-)

There are of course much more detailed predictions you can make if you consider specific models.

But let me first say that there are three main methods to construct Calabi-Yau manifolds:
One needs to know some fancy higher-dimensional geometry and I am not a genuine expert myself but I could still give a short lecture that will have to be dramatically reduced here.

The first group, the complete intersections, are defined by sets of algebraic (polynomial) equations for homogeneous coordinates of products of projective spaces. Candelas, Dale, Lutken, and Schimmrigk began to probe this class in 1988.

The elliptically fibered ones were intensely studied e.g. by Friedman, Morgan, and Witten in 1997.

The paper we discuss now is all about the third group, the Calabi-Yau three-folds extracted from Calabi-Yau four-folds. In 2000, Kreuzer and Skarke listed \(473,800,776\) ambient toric four-folds with a reflective polytope. The list was "published" two years later. You know, it's not easy to print almost half a billion of entries in a journal. Just kidding, the full list was of course not printed. ;-)

This class obtained from four-folds seems to be most inclusive and it's this class which is enough to produce the examples with \(30,108\) pairs of the two Hodge numbers. While one can construct at least one Calabi-Yau three-fold from each four-fold, it's my understanding that the number of topologies of Calabi-Yau three-folds is vastly smaller than half a billion because there are very many repetitions once you "reduce" the four-folds to three-folds.

The new Asian/Oxford paper wants to focus on heterotic phenomenology. For such models to be viable, we need manifolds with a nontrivial (different than the one-element group \(\ZZ_1\): a clever notation, by the way, right?) fundamental group \(\Gamma\). This group counts non-contractible curves along the manifold that are needed for the symmetry breaking by Wilson lines, something that is apparently necessary to break the GUT group down to the Standard Model group in similar models (the GUT Higgs fields are totally circumvented, they probably have to be circumvented, and the Wilson-line-based stringy breaking seems more viable than GUT-scale Higgses, anyway).

In other words, we need four-folds that come in pairs. The pair includes an "upstair" manifold \(\tilde X\) that has an isometry \(\Gamma\) and the "downstair" manifold i.e. quotient \(X=\tilde X/\Gamma\).


To make the story short, they only found 16 four-folds whose order (number of elements) \(|\Gamma|\gt 1\) i.e. for which the fundamental group is non-trivial.

There has to be quite a competition to get this small shortlist. One could argue that except for the \(16\) entries, the half a billion candidates don't allow life in the sense of the usual anthropic discussions. A non-trivial fundamental group seems to be more important for life than oxygen.

Now, for some esoteric Picard geometric reasons, they eliminate two candidates (with \(\Gamma=\ZZ_2\)) and they try to put line bundles on the remaining \(14\) manifolds and pick the manifold/bundle combinations that lead to three chiral families embedded in consistent supersymmetric models. This produces \(29,000\) models, still a pretty exclusive club. Most of them (\(28,870\)) have the \(SO(10)\) gauge group, my favorite one, when interpreted as grand unified theories broken by a Wilson line; there are \(122\) \(SU(5)\)-based models, too. If you believed that the right vacuum is a "generic" element of the list, it would be likely that the group is \(SO(10)\) which means that there exist right-handed neutrinos, among other things.

It's sort of impressive what progress has occurred in this heavily mathematical portion of string phenomenology in recent years. The advances were made possible by a combination of progress in algebraic geometry and in computer-aided algebra – and with the realization of the importance of holomorphic vector bundles that satisfy the Hermitian Yang-Mills equations as an efficient way to deal with the difficult problem of the gauge fields that have to have a profile on the compactification manifold.
Luboš Motl v 11:16 AM
Share