A universal derivation of Bekenstein-Hawking entropy from topology change, ER-EPR

I have been intrigued by topology change in quantum gravity, especially its Euclidean version, for 15 years or so. Since the beginning, I liked a sketch of a derivation (that I invented) of the Bekenstein-Hawking entropy of a black hole that was based on a wormhole connecting two tips of the Euclidean black hole in the \(rt_E\) plane. 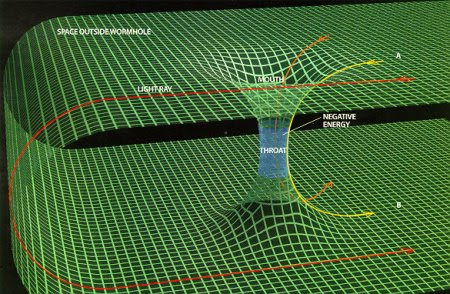 Before the ER-EPR correspondence, I would interpret the two planes on the picture above (lower, upper) as spacetimes in the ket vector and the bra vector, respectively, and this need to double and complex conjugate the whole spacetime made the details of the argument confusing because the thermal calculation (which is inevitably connected with the cigar-like Euclidean black hole pictures) inevitably involves a trace over ket vectors (or bra vectors but not both).

Fortunately, one may now present the whole argument without any bra vectors. Thanks to Maldacena and Susskind, the doubling of the spacetime (note that there is the upper and lower plane on the picture above) may be interpreted as the presence of two distinct spacetimes or two faraway regions of one spacetime – or two faraway regions of the same spacetime; it won't really make a difference. With this reinterpretation of the pictures, I am more satisfied with the argument.


Try to calculate a thermal correlation function in a spacetime (or a pair of spacetimes if you really view the two planes as disconnected) of temperature \(1/\beta\) which will be chosen to agree with the black hole temperatures below. The operators in the correlation functions don't matter; assume that they are low-energy operators far away from all the celestial bodies we will consider.

We want to know how much the states with two black holes at places \(A,B\) (in arbitrary microstates) contribute to the correlator; and how much the states with two neutron stars at the same places \(A,B\) contribute. The ratio of the two contributions should be \(\exp(S_A+S_B)\) where the terms in the exponent are black hole entropies times some subleading corrections (all neutron stars' entropies will be negligible). Just to be sure, the contribution from two black holes should be exponentially larger. I will take the two celestial objects to be macroscopically the same so the ratio should be \(\exp(2S)\) where \(S=S_A=S_B\).

By the neutron stars (a nickname chosen for the sake of simplicity), I really mean a celestial body that is on the verge of collapsing to a black hole. I want \(g_{00}\) to be very small right above the surface of this body. Because \(|g_{00}|\) wants to be even smaller in the stellar interior which makes it impossible for \(|g_{00}|\) to be near zero above the surface, I really need to consider a hollow star – a shell that is protected against the collapse by some skeleton or light gas inside or whatever. I hope that these awkward technicalities don't really matter and can be replaced by a less problematic treatment. Maybe it's enough to compare the two-black-hole contribution with the contribution having no objects at those places at all.

For the sake of clarity, let's assume that the black hole radii are equal to a few miles (a solar-mass black hole). The thermal correlators may be calculated from the path integrals\[

\] over the Euclidean geometries with Euclidean field configurations in a spacetime whose Euclidean time coordinate \(t_E\) has the periodicity \(\beta\).

Now, we don't want to study the detailed microscopic physics of the neutron stars. Their entropy (and any non-black-hole celestial object's entropy) is negligible in comparison with the black hole entropy. We don't even want to specify what exact short-distance degrees of freedom are responsible for the black hole entropy. Indeed, the goal is to derive the Bekenstein-Hawking formula "universally", for every quantum theory that resembles quantized general relativity in a limit.

But yes, in this geometrized picture of the degrees of freedom, all the entropy is carried by some degrees of freedom – field modes and their generalizations – that may be attached to the stretched horizon, a Planckian vicinity of the region that will host a throat in a minute.

To neglect the short-distance physics, why don't we integrate out all the field modes with wavelengths shorter than 1 millimeter (to be specific again)? When you do so, the two-neutron-star contribution looks like two disconnected pieces, essentially two planes (the upper and lower plane) not connected by the throat shown on the picture at the top. Even if there has been some entanglement between the stars, it was way too weak to produce the smooth throat. Instead, the thin tunnels disappeared as we integrated the high-energy degrees of freedom out. The stellar interior isn't clearly shown on the picture – the picture only shows the stellar exterior – but it's somewhere and the Ricci scalar \(R\) is essentially zero everywhere. Again, maybe I should replace the neutron stars by empty regions of space throughout this argument; I wanted the two compared situations (with and without black holes) to be as similar as possible, however, so that the difference may be blamed on the throat, as we will see momentarily.

What about the two-black-hole contribution?

In general, the two planes – see the picture at the top – are connected by "some" throat. When you integrate all the field modes shorter than one millimeter out, you also do it for the gravitational modes so the geometry can't be too thin or curved. In effect, the gradual integration out thickens the throat in the black-hole case while it cuts the throat(s) in the stellar case. When you're finished, the throat itself is about one millimeter thick. It was a randomly chosen distance scale that is much longer than the Planck scale but much shorter than the black hole radius.

Looking at the two-neutron-star and two-black-hole Euclidean geometries, they look very similar. The only difference is the throat near the event horizon (or near event horizon in the case of the stars). In that region, the \((d-2)\)-dimensional area of the angular variables is constant, \(A\), which simply enters as an overall factor to the difference of the actions, and the major components of the curvature tensor only exist in the two-black-hole case and in the Riemann components \(R_{rtrt}\) and its three copies dictated by the Riemann tensor's symmetries (\(t\) really denotes \(t_E\) as an index).

(The throat in the black-hole case isn't Ricci-flat; the nonzero Ricci tensor must be blamed on the high-energy matter that resides in the stretched horizon(s).)

So the two contributions to the path integral – from the two neutron stars; and from the two black holes – only differ by the extra "wormhole" in the two-black-hole case. This wormhole is a "handle" of a Riemann surface and the exponent of the Euclidean path integral is more negative in the black-hole-case (I hope) relatively to the neutron-star case by the factor\[

\] over the handle (wormhole). But the two-dimensional integral – the Einstein-Hilbert action above – is proportional to the Euler characteristic\[

\] exactly as expected from the Bekenstein-Hawking entropy of two black holes. This multiplicative increase implies that there are \(\exp(A/4G)\) black hole microstates per black hole whose precise identity doesn't significantly affect the correlator we agreed to compute. So if we trace over them (and we do so in a thermal calculation), they just influence the result by the simple multiplicative factor (the number of these microstates).

You may have some doubts about the sign of the Euclidean Einstein-Hilbert action used above. I have some doubts as well. I can enumerate about 6 things one must be careful about that may lead you to a wrong sign but I am not sure whether I am not missing some other sign flips. The probability that I keep on committing a sign error here is too close to 50 percent at the end ;-) which is why I must add that a more careful scrutiny is needed.

This argument may arguably be generalized to derive Wald's entropy formula for a more general action including higher-derivative terms. In these cases, one still has \(R_{rtrt}=2\pi \delta^{(2)}(r,t_E)\) per black hole located at the horizon and if we treat this modification of the Riemann tensor perturbatively, the change of the gravitational action produces Wald's entropy formula instead of the Bekenstein-Hawking formula above.

Incidentally, I think that quite generally, the black hole entropy must also be interpretable as the total order/volume of an approximate symmetry group of a given spacetime because a black hole may be interpreted as a codimension-2 "cosmic string" in the Euclidean spacetime (which is analogous to 7-branes in F-theory and requires us to study the monodromies). But why this gives the right results in weakly coupled string theory (where you have a \(U(1)\) for each free field-theory mode produced by the string theory); pure \(AdS_3\) with the monster symmetry group; and in BTZ-black-hole-based \(AdS/CFT\) calculations will be reserved for other blog entries, much like the connections of the ideas above with the representation of microstates as Mathur's fuzzballs.