First, a technical poll. Odiogo was producing the "listen now" button under the titles that could "read" the texts. Snap previews were thumbnails of the linked to page that appeared whenever you hovered over a link.


Results: At some moment, up to 97% of voters ("consensus") said "good riddance to both". I still tend to think that the Odiogo's users were importantly hurt and apologize to them. [...]

Congratulations to all conservative Australians and those who were not friends of the carbon tax (AUS $23 per ton of CO2 equivalent on selected sources).

The younger ones aren't Tony Abbott's mistresses; they're daughters.

Remarkably enough, the (so far) modest new tax became a key political question in Australia. It's arguably the main reason why the Labor Party experienced the worst results in 80 years.


The importance of the carbon tax is self-evident after the elections as the first steps of the winners of the election are going to be (and already are) steps to fire redundant personnel whose task was to contaminate the Australian legislative and fiscal landscape by the new tax and its assorted tentacles and testicles. Some pundits claim that it won't be easy to repeal the tax but I would bet it may be done.


Australia is open for business again. 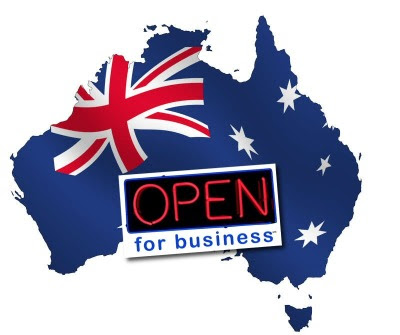 This Rudd's and Gillard's loss leads us to ask the question: Is it still beneficial for politicians to support the climate change scam and the policies that have been recommended by the perpetrators of this scam?

An obvious answer is No. With such an answer, one must immediately ask another question: So if it is so suicidal for politicians in democracies to support such things, why were many of them so clearly in favor of such an ideology and such policies just a few years ago?

Well, I think that this issue has several important aspects.

One aspect is that years ago, the climate change propaganda was just a talk. It was a fabricated threat that allowed the policitians to promote themselves to the saviors of the world and ethically clean superheroes (in the eyes of the gullible, intellectually challenged but sometimes idealist voters). Just like Adolf Hitler was saying that his nation and race may suffer if the voters don't allow him to fight against the Jews, cosmopolitans, and left-wing folks of all unpopular types, the champions of the climate alarm among politicians pretended that the voters' support for them was needed to save the Milky Way or at least life on Earth.

But the talk wasn't enough. Some fans of this talk unsurprisingly insisted that the words should be replaced by acts. The initially moderate but annoying carbon tax in Australia was a clear example of the harassment that the climate change ideology directs against companies, their employees, their business partners, their consumers. Billions of Australian dollars were being stolen from the Australian citizens' pockets and directly thrown to the trash bin for (literally) microkelvins of global cooling that were claimed to be a "good thing".

Of course that voters don't have to possess a PhD to realize that this is really insane. The Labor Party got an opportunity to learn a lesson. I would say that Julia Gillard must be either really stupid or an unfixable brainwashed idealist or both if she couldn't foresee that her support for the hated tax would sink her ship in politics. Kevin Rudd was lukewarm about the carbon tax and he was returned behind the Labor steering wheel earlier in this year but it was already too late.

A question is whether similar developments would take place in countries different than Australia.

This is a question that has no beef in the Czech Republic where "climate change" is a non-issue in one way or another. No parties in the Parliament consider the "fight against climate change" to be among important political tasks. Everyone is only thinking whether one should please or ignore the bureaucrats in the Brussels. And everyone realized that some policies we were "encouraged" to adopt were crazily uneconomic – although some Czech politicians have surely shown way too much "surplus activity", more than what was actually needed (Czechia became Europe's #3 photovoltaic power in the absolute numbers, despite its medium size); indeed, Czechs aren't curious about too much idealistic talk which is why the path from words to deeds is usually much shorter than it is elsewhere. And some of the politicians have even earned lots of money from the photovoltaic boom and perhaps from insider information, too. My optimistic understanding of some news is that the prosecutors and regulators are going after the neck of many of such people (solar barons etc.).

But I am asking about the U.S. and countries in Western Europe where political correctness rules (or ruled) and where "climate change" made it to a political issue. Would a major U.S. party record its worst showing in the elections for 80 years after it would introduce a similar carbon tax?

The case of the Western Europe is problematic because some carbon schemes are already in place and it is not really clear which parties and politicians are behind them. They were introduced sort of "outside democracy", by the group think of some abstract politicians who live outside the real world, especially by "EU-wide" politicians who weren't really elected by anyone. This is a big problem.

It doesn't mean that there are no Western European parties that are pretty clearly against the carbon taxation and similar (cap and trade etc.) schemes; just watch UKIP's Nigel Farage's today's speech on the AGW hysteria in the EU Parliament above. The real problem is that the parties that are responsible for such schemes aren't known and the introduction of such schemes was pretty much sold as an inevitable thing that people couldn't express their opinions about. So the situation in many countries of the EU is muddy. Needless to say, this mud is correlated with the gradual evaporation of democracy at the EU level.

Although there are many hints that the bulk of the EU is abandoning the anti-carbon hysteria in its energy policymaking (and some countries are likely to follow the U.S. in the fracking boom), it's still plausible that the carbon cap-and-trade schemes in Europe will not only survive but they may be escalated, too. Well, in that case, Europe as a political entity deserves to weaken, die, and be overtaken by another power that doesn't suffer from the disease.

Incidentally, Abbott wants to abolish the carbon tax and has a mandate to do so. Still, Australia has signed some international treaties about CO2 reduction. As far as the commitments go, he will reduce a hundred or so of offices (!) tasked to do such things to 3 offices. The tax should be superseded by "direct action" which will organize "reverse auctions" in which CO2 emitters will compete for direct subsidies. I do believe that this is a less harmful, less intrusive way to allocate the resources to fulfill the (nonsensical) commitments from the international treaties and actually guarantee that some of the money will be used to reduce the emissions.

Also, while it's true that the money for these projects will be paid by "similar people" at the end, regardless of the different laws (pretty much all the citizens, especially those for whom fuel etc. represents a higher percentage of spending, e.g. poor people), the different Abbott's algorithm to allocate the resources has a refreshingly novel ethical dimension. It's the Australian government, not Australian citizens and companies, that signed nonsensical treaties about the CO2 reduction (stupid treaties that only bring disadvantages and no advantages to Australia) so it should obviously be the government, and not the innocent companies or consumers, that has to pay for such plans – that has to pay for its mistakes. The payment of the projects through subsidies will also make it much clearer how much money has actually been spent for this "cause".
Luboš Motl v 2:11 PM
Share