A 2006 article about the feminist totalitarianism attracted hundreds of Slovak visitors today because it was linked to in a discussion under a remarkable Slovak newspaper article about some incredible demands by the French feminists. 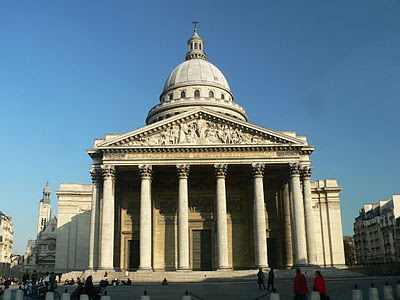 The story sounded like a hoax but Reuters was among the many well-known news agencies that ran the story which made me believe that in spite of its nearly comical content, the information is legitimate.

Panthéon, Paris was built sometime in the middle of the 18th century (I've been there once but that's enough). Between 1791 and 2011, 74 French figures were buried there. There are two women among them: the double Nobel Prize winner Marie Curie and Sophie Berthelot. The latter is there only because she joined her chemist spouse Marcellin Berthelot; I don't know either of the couple.


So there will be an online poll. To make things even more brutal, it won't be a poll about whether this preposterous idea is tolerable. It will be directly a poll about the women who will be relocated there. President Hollande apparently supports this breathtaking rubbish. They will probably start with something like five new female tenants.


To make things even more absurd, the monument bears the inscription "To its great men, a grateful fatherland" ("Aux grands hommes, la patrie reconnaissante"). I wonder whether the word "hommes" will eventually be rewritten to match the new composition. Incidentally, because of the "hommes" description, even Marie Curie – who may be argued to have surpassed her husband – is there primarily as a wife.

You could find some OK enough women who are missing there – but many more great men are missing, too. This list of omissions includes Balzac, Stendhal, Michelet, Proust, Exupéry, Sartre, Camus. I could add tons of top mathematicians such as Cauchy, Laplace, Galois. They're missing, too.

The shameless feminist group "Osez le féminisme" (Dare to be feminist) and its painful apologists want nothing less than to rewrite the history. It's just a historical fact that the great people of France who died in the aforementioned period (and it was an enlightened period from all sensible points of view you may think of) were predominantly men. Before you dare to be feminist and disagree, you should tell me who were the real female counterparts of Voltaire, Russeau, Dumas, Hugo, and (except for Marie Curie) Lagrange, Carnot, Pierre Curie, Langevin.

Let me help you: there have been no (other) true counterparts who would be in the same league.

To impose the quotas really means to bury some women who will belong to a demonstrably lower category than the average men who are already buried there. Where does it stop? A group of Algerians in France may also demand to bury a dozen of dark-skinned French citizens. Homosexualist NGOs will demand a higher fraction of gays. And so on and so on. Soon or later, the facility runs out of space and people like Lagrange will have to be thrown somewhere to the Seine river – because of women and Arabs you have never heard of who were pushed there by despicable political groups for which their own petty, egotist group interests are vastly more important than the greatest mankind's achievements.

Similar proposals open many inequivalent questions. One of them is whether the process of burying has been meritocratic in character since 1791. Well, it could have been imperfect but it was surely free of outrageous interventions by NGOs who would openly insist on burying (or not burying) people from a group for purely ideological reasons.

Another question is whether the burying should be meritocratic at all. It should – it's what gives the actual weight and importance to Panthéon and many other facilities and institutions. An institution deciding non-meritocratically will inevitably lose credibility. The feminist movement may benefit but the Panthéon and all of France will lose greatly.

A third question is whether the overwhelming dominance of men in Panthéon was just a special feature of the period (1791-2013) or whether the gender composition will change in the future (well, "would" change in the future because we're now told that the era of meritocracy is over). Well, I would personally bet it won't (wouldn't...) change much. But if it will change, it will be thanks to the work by great women who will do things comparable to Voltaire, Lagrange, and Curie and not due to the work by whining feminists who want to enjoy advantages with no work or achievements, just by organizing guerilla groups and by screaming that they're entitled to enjoy the same accolades as the greatest men in the French history.

I urge the husbands or fathers of the women in the feminist NGOs to spank them really vigorously because that's what they actually should be entitled to.
Luboš Motl v 11:57 AM
Share