IPCC AR5 will reduce sensitivity by 30% or so

In two weeks, one third of the remaining traces of the climate hysteria will evaporate within a day

Matt Ridley wrote an article for the Wall Street Journal (and Anthony Watts' blog) where some information about the upcoming IPCC report is leaked. 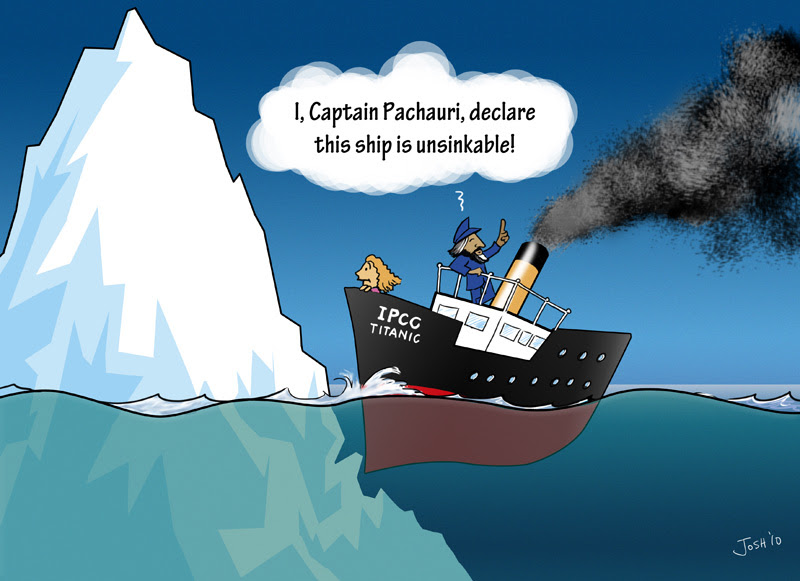 The fifth assessment report (AR5) about the physical basis of the climate hysteria (Working Group 1) will be released in Stockholm on Friday, September 27th. It will have 1,914 pages plus 31 pages of the summary which is what will be enough for "most readers".

Their estimate of the warming produced by an increase of the CO2 concentration has been substantially lowered relatively to the year 2007.


The equilibrium climate sensitivity (ECS) is the global mean temperature increase caused by the doubling of the CO2 concentration (typically, one means from the pre-industrial 280 ppm to 560 ppm which will be reached shortly before the year 2100) when one waits for all (arbitrarily slow or delayed) feedbacks to do their job. Roughly speaking, ECS is the expected temperature increase contibuted by all the man-made CO2 between the years 1750 and 2090.


The actual scientific evidence makes it "extremely likely" (95+ percent) that the ECS is between 0.5 and 1.5 °C i.e. not far from the generally agreed no-feedback figure close to 1.2 °C. These figures are favored by various observation-based and theory-laden calculations.

The fourth IPCC report (AR4) heavily distorted and misinterpreted the scientific evidence when it claimed that it was "very likely" (90+ percent) that the ECS was above 1.5 °C (note that it's just the opposite inequality than mine) and "likely" (66+ percent) that the ECS was above 2.0 °C. They also listed the "most probable" (they really meant "median" but OK) value at 3.0 °C while the ECS wasn't bounded by the IPCC AR4 report from above at all, deliberately legitimizing numerous sorts of crackpots who would say that it is 5 °C, 10 °C, or 583 °C.

See the bottom of this page for a translation of the assorted "crazily likely" words into numbers. In this text, I am assuming that this dictionary won't be modified.

The words used for the different values of the probability are (deliberately?) chosen to be different than in 2007 so that no direct comparison may be made but all the figures are compatible with the summary that the IPCC reduced all their 2007 values of the sensitivity by 30% or so.

If this trend continued, the seventh IPCC report in 2025 would finally publicize values that are compatible with the present scientific evidence indicating the ECS to be of order 1 °C. Already in the 2013 IPCC report, the numbers are at most 100 percent higher than those I consider correct which is not a "spectacular disagreement". The actual reasons that lead some people to insane ideas such as the idea that "we should try to regulate CO2 emissions" are ideological in character; they have nothing to do with the science, with the models, or with the numbers.

Incidentally, this fact – that the climate alarmism is about a mutation of the Marxist ideology, not about the science – that has been emphasized by your humble correspondent, our ex-president Klaus, and others for years is no longer a taboo. Gavin Schmidt pretty much admitted it was the case, too.

In the Real Climate article linked to in the previous sentence, he tries to obscure the simple fact that 114 out of 117 models overestimated (usually wildly) the warming in the last 20 years. That's 97% – an amusing explanation of the 97% consensus. 97% of existing climate models say that the global warming is large and all of these have been proven wrong. The spectacular failure of the climate models was discussed by Fox News, in a 3-days-old article (which quickly became Fox's most read science article for that day) based on a 2-weeks-old paper in Nature Climate Change that would be considered a blasphemy in that journal just four years ago.

Now, it is finally a fact admitted in the most mainstream journals about climate change you can find that the existing climate models wildly overstate the warming trends. We skeptics have been pointing out this fact for a decade (in my case), sometimes for several decades (Richard Lindzen). It's painful that we had to wait through 2013 for these claims to become legitimately publishable scientific knowledge but it's good that the required time was finite at all.

Gavin Schmidt "explains" the discrepancy between the models and the observations away by many possible factors. The models could be wrong but the observations could be wrong, too. Moreover, the methods to compare them could be wrong, and we could also be incorrectly using the Arabic numerals. Maybe the scientific method doesn't work and/or one of the philosophers from the 18th century was right. We may also live in a simulated Universe and Mrs Simulator is just teasing us. You may read kilobytes of this vacuous babbling written by Schmidt. All of it is meant to confuse and convince gullible readers that Schmidt and his fellow alarmist warriors are anything else than a demonstrably failed pile of shit. Whatever the exact reasons for the failure are, it's clear that none of the mistakes is tolerable for research that is meant to justify multi-trillion expenses.

But what I was also intrigued by was his answer to the very first commenter beneath the article. Schmidt openly says that the policies have nothing to do with the numbers at all. He in fact combatively asked the commenter for the evidence because he (the commenter) dared to suggest that the policies should be justified by numbers. No, numbers don't matter, we learn from Schmidt. What matters is that the ECS is nonzero. Well, almost all numbers in the Universe are nonzero (all numbers except for zero are nonzero) and even a butterfly's waving wings in Peking influence the weather in New York next month "at least a little bit" which never means that we should adopt a single idiotic policy.

The values of the sensitivity after the 2013 reduction would still produce a measurable – but no longer "eye-catching" – overestimate of the warming trend in recent decades. But what's more important is that the new numbers are compatible with the claim that the CO2-induced change of the temperature can't be dangerous, at least not in the coming century, and skeptics have been right all along.

Even though the people behind the 5th report are very similar to those who may be blamed for the 4th IPCC report from 2007, it's conceivable that the publication of the new report in 2 weeks will mean the end of the attempts to support the radical Luddite policies by the natural science. Pointing out that the alarmist claims are in a severe conflict with the empirical data has become legitimate in pretty much all the relevant portions of the society that were dominated by cowards, opportunists, brainwashed and confused people, and especially people with a vested interest to hide the truth (that doesn't mean that you can't get fired for such blasphemies: your boss may still be one of the German May 10th, 1945 soldiers who keep on defending the Third Reich and who believe in its ultimate victory). Even colorless, average politicians began to ask how it's possible that the predictions have been so incorrect, too.

By the way, I have recalculated the RSS AMSU temperature trends and I confirm Lord Monckton's claim that the dataset shows a negative temperature trend in the last 202 months (increase from 200 we had a month ago). That's 16.833 years.