I had to laugh when I was reading Tamara Cohen's comments about a political IPCC document leaked to the Associated Press. (See also related stories in The Telegraph, Boston Globe/AP, Forbes, others. Fox News calls it Climategate II: scientists pushed to hide data.)

Next Friday, the 31-page Summary for Policymakers of the WG1 (first working group, physical basis of the climate hysteria) will be officially released although many of you already have it at home. It seems that during the next week, minor and localized corrections to the document will be done by politicians. Three days later, the full (less political, more objective, more boring, less socially "interesting") 1,914-page report of that group will be out, too. In March and April 2014, WG2 (impacts) and WG3 (mitigation) will release their work and all of them will be combined in October 2014.

The topic of Cohen's article is simple. Political employees were assigned the task to fine-tune the summary. A "minor" problem is that the report should talk about the ongoing warming whose rate may even be dangerous but according to the observations, there hasn't been any warming for 17 years (the trend is still negative for the last 16.83 years). Too many people have already noticed that this main actor, global warming itself, didn't arrive to the stage.

So politicians from many nations committed to the climate panic were crying over spilled milk and proposing various original solutions what to do with the milk, milk that seems to be cooling down on the floor every second. If someone can't figure out from this story that the key claims by the IPCC are politically dictated and that the organization is constantly covering up key evidence, then nothing will ever make him to see the simple reality.


The diversity of the nations and their different ways to cry over spilled milk is really amusing.


Let me quote from Cohen's article:


Germany called for the references to the slowdown in warming to be deleted, saying looking at a time span of just 10 or 15 years was ‘misleading’ and they should focus on decades or centuries.

Hungary worried the report would provide ammunition for deniers of man-made climate change.

Belgium objected to using 1998 as a starting year for statistics, as it was exceptionally warm and makes the graph look flat - and suggested using 1999 or 2000 instead to give a more upward-pointing curve.

The United States delegation even weighed in, urging the authors of the report to explain away the lack of warming using the ‘leading hypothesis’ among scientists that the lower warming is down to more heat being absorbed by the ocean – which has got hotter.


And so on. Funny. So we have politicians from at least four countries who were proposing ways to hide a key fact about global warming – that it hasn't been there for over 16 years – and each of them proposed a different "superb solution" that should do the trick. The only problem is that among the participants, there isn't any consensus about the question which of the "unique, unmatched, canonical" algorithms to obscure, cover up, or distort the evidence should be adopted by the collective of diverse fraudsters.

The German comrades (the AP says "politicians" but I think that it's ultimately Schellnhuber et al. who are deciding what "Germany" should say at such meetings) said that the justification to cut any references about the absence of warming should be that "one should focus on decades or centuries" (we are not told how many decades; the vagueness is deliberate, of course). A nice try except that this is not what the alarmists' own "literature" says.

The most recent, widely publicized paper about this very question was published in Journal of Geophysical Research and written by Ben Santer and 16 similarly famous co-authors in 2011 (TRF 1, TRF 2). This genuine "elite" of the alarmist scientists (along with many others like Kevin Trenberth who were enthusiastically promoting this paper) concluded:


Our results show that temperature records of at least 17 years in length are required for identifying human effects on global-mean tropospheric temperature.


According to the expert journals, the marginal length scale at which the predicted anthropogenic warming trend should show up isn't 30 or 50 or 200 years. It is 17 years.

So we can now use records that are 17 years in length and answer the question whether the significant human effects exist. The answer is that they don't. Comments that one should be talking about many decades or centuries may be a good idea for the laymen or for creative politicians but they just don't agree with the results of the scientific research. In politics, promises may be delayed indefinitely and the meaning of words and interpretations of sentences may be shifted indefinitely, too. But in science, we are talking about particular propositions and particular evidence that strengthens it or weakens it (or falsifies it). Ben Santer et al. were talking about some particular warming rate bounded from below, immersed into a particular model of the "natural noise", and it made a particular prediction that was falsified. So the general idea of an CO2-related warming is still alive or plausible, of course, but one must reduce the effect at least by a factor of 2 or 3 to keep the idea viable. And such a reduction makes the effect uninteresting in practice. 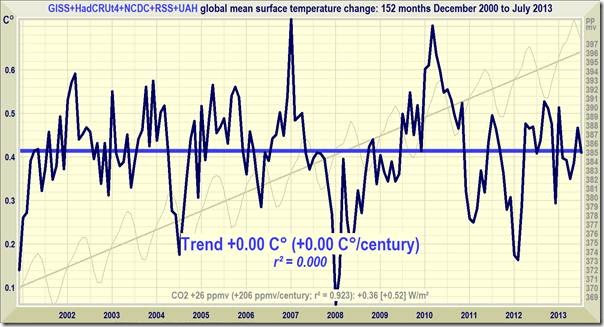 The Hungarian comrades didn't even try to propose a clever trick or a convincingly sounding justification for censorship. They just cried over spilled milk. It's a catastrophe, they tell others, because the deniers will notice. Well, the deniers as well as all intelligent people who will care will notice, too. And they should.

The Belgian comrades were more creative. The previous IPCC decision to discuss the last 15 years should be modified and only the recent 14 or 13 years should be discussed so that the period doesn't begin with the 1997-1998 El Niño but with the 1999-2000 and nearby La Niñas which is a way to make the trends look (more) positive. Cutely enough, the skeptics were occasionally accused of cherry-picking the initial years. Some of them may have done it. But you know who primarily does it? The politicians who have the "final word" when they distort the results of the (already sufficiently distorted) scientific research reviewed by the IPCC.

Which length of the period is more natural and representative, 15 years or 14 years? It is up to your taste which numbers are "rounded". But even if you pick 13 or 14 years, it doesn't help much: the temperature trends for the last 13 or 14 years are minus 0.23 °C per century or plus 0.20 °C per century (look at the big table, next to the numbers 13, 14 in the scarce first column), pretty much zero, with numbers plus and minus being equally likely in this region. At any rate, the warming or cooling rate is at least 10 times slower (with both signs) than the IPCC-predicted one even if you omit the 1997-1998 El Niño. The absence of the warming is not just an artifact of the 1997-1998 El Niño. Even if you cherry-pick an arbitrary initial month for the linear regression, then the warming rate extracted from the observation will be smaller than 0.5 °C per century as long as the interval ends with the recent months and its length is anywhere between 19 and 7 years. You actually find much faster cooling trends in the interval; for example, the cooling trend was –0.78 °C per century in the last 12 years. No year 1998 is involved here.

Nice except that it is not a leading hypothesis, it is not (yet) a justified science at all. It is just a random desperate guess by Kevin Trenberth. The only error should have been the "missing heat". So he first made the guess and then he wrote some paper(s) that attempted to rationalize the predetermined conclusion but as many others such as Judith Curry noted, the attempts to upgrade the guess to science remained inconclusive. Moreover, even if this explanation were right, it couldn't really "save" the climate panic from the impact of the non-existent warming. Why? If the dog or the oceans ate the homework or the warming once, they can eat it again. So it's still true that it's perfectly plausible that there won't be any warming (or there will be cooling) in the next 20, 30, 50, or 100 years. With the effect of the dogs or oceans incorporated, the actual warming trend may easily be 3 times or 5 times or 20 times smaller than in the "dangerous projections".

Quite generally, one could say that the American delegation prefers to publish the facts and supplement it with a (bogus) explanation while the European climate alarmists prefer downright censorship. This opinion is also supported by the comment in The Boston Globe that the U.S.-based Union of Concerned Scientists And Anthony Watts' Dogs is worried that people will be saying "look, the IPCC is silent about the lull" which would be even worse than for "the cause" than a confession that there's been no warming for nearly two decades.

There just isn't any competitive hypothesis about the lack of warming that would be compatible with the meme about a dangerously high (and all natural factors beating) warming trend caused by the anthropogenic man-made emissions. Everyone knows that no such explanation that one wouldn't be ashamed of exists in the scientific literature which is why no one will recommend you any paper of this type. There just isn't one. The leading interpretation of the absence of the warming is that the global warming hypothesis with the numbers that were dominant among the "concerned institutions" in the recent decade has been falsified by the observations. Too bad that politicians are trying to play painful and childish games to misinterpret the results of the scientific research, research that they claim to be listening to but research that they actually want to control so that it suits their political needs.

And that's the sad memo (hopefully not sad for too long).
Luboš Motl v 1:59 PM
Share