Windows 8, the lack of progress, and the end of the PC era

For the first time, I could have spent a few hours with a Windows 8 computer (although I have played with an emulator of it last year). Well, I had to first-boot someone's new HP laptop and install some basic software and hundreds of Windows and driver updates. It took many hours. Fortunately, no blue screens of death were a part of the experience. 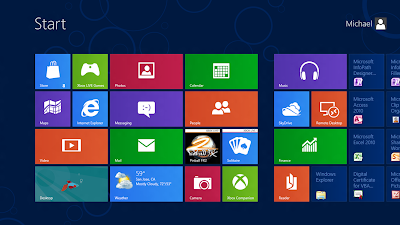 The system starts with the tiles and it's sort of cleaner and I wanted to know whether it would have a WOW effect on me. Sadly, as a long-term Microsoft fan and Windows person, I must say that it didn't. Maybe the decrease of my excitement from the last year is due to my having seen many cool(er) things that tablets and smartphones routinely manage to show.

Windows 8 is a smartphone-inspired coating on top of the almost unchanged Windows desktop – that has nevertheless been stripped of some normal Windows things, apparently with the goal to make the user more annoyed.


In the early 1990s, we would be working with Windows 3.1 and similar systems that "felt" like some graphical application running in MS-DOS. It was OK and we could have done many things in MS-DOS, anyway. But at that time, Apple was ahead of Microsoft in the windows experience. Windows 3.1 didn't look "substantially" different from a 1984 version of Mac OS.


This changed with Windows 95 around 1995 – for the first time, one could really feel that this was a new, better Windows experience in which you could actually rely on the windows that were running underneath everything and just worked. Well, internally, this was only the case for Windows NT but I don't want to go into details. Windows 2000 looked like an improvement, too.

Windows XP was released in 2001, two weeks prior to the 9/11 events, and it arguably improved everything, especially the user experience. All the windows were sort of cuter. Critics praised it and it was a success. Nevertheless, I would already say that the progress was slower than what one could have expected from 6 years of work in a major software company.

Windows Vista came another 6 years later, in 2007, and the slow progress seemed even more self-evident to me. This is highlighted by the fact that I would consider Windows Aero – the transparent glass effects of the windows' upper bars – to be the most memorable improvement. It's cool but it's not comparable to the salaries of top programmers for 6 years.

Already with Windows Vista, I was feeling that the progress was going "sideways" – it was orthogonal to what one could consider a "clear improvement". You expect the new operating systems to be "better descendants" of their ancestors. Windows Vista always sounded like a brother or nephew or something like that relatively to Windows XP. All the changes were pretty much equally likely to be viewed as advantages as disadvantages. Many of them looked like "a change just for the sake of change".

The same "uncle" comments apply to Windows 7 released in 2009 – but I am satisfied with Windows 7, just to be sure.

In some sense, Windows 8 is trying to respond to the smartphone-and-tablet revolution but I share the doubts with many people on whether or not Windows as a paradigm may survive in this way. The tablets and smartphones mostly use iOS or Android (Nokia Lumia, now owned by Microsoft, is the only credible Windows-based line of smartphones) and those have been designed as "limited" operating systems with a reduced number of functions for quite some time. As the performance of the microprocessors was going up, all the usual tasks we used to associate with the PC might have been added to the tablets – and smartphones.

Windows has to dig the tunnel from the other side. It started at the most universal computing machines we would have at home and it's trying to make the experience simpler, more intuitive, in the style of the smartphones. But there are many buts.

First of all, Windows 8 looks incoherent. It looks like a combination of two very different operating systems, a union of two different types of apps (the usual Windows desktop apps and the tile apps). This "hybrid" character wouldn't necessarily be a bad thing but given the unavoidability of some tile apps and some desktop apps, the user is effectively forced to learn to think in two ways at the same moment which ruins any possible claims about simplicity.

Now, some features of Windows 7 died, most notably the start button. There perhaps exist arguments to convince you that you can live without it. But that's like proselytizing a user who is not satisfied. There are certain rather complicated procedures that the user has learned to do with older Windows systems and he or she just wants to do "something analogous" with the new Windows system, too. It seems that he has to undergo a whole new course to replace the previous knowledge but at the end, be able to do just the same things as before. It seems to me that the "transition costs" haven't been incorporated into the planning. The Microsoft leaders are perhaps trying to argue with the users how they should think and feel – Microsoft bosses may "force" their employees should think in a certain way if the bosses believe it's a good idea but the users are free (not paid by Microsoft) and they ultimately decide whether they buy a product.

It seems obvious to me that the start button should have been left there, at least as an optional possibility. The same comment applies to other features that were dropped. Windows 8 doesn't naturally allow you to have the Windows Aero glass theme anymore so this "modern look" (a look that was once marketed in this way, and I think that for a good reason) has been reverted again. That's a part of the Windows 8's efforts to be compatible with arbitrarily weak computers – an overreaction to the previous criticisms that the new Windows systems always demanded much more powerful PCs than their predecessors. However, as a choice, Windows Aero should have been allowed. (There is a loophole that allows you to run it, anyway.)

Well, frankly speaking, I don't like the sharp corners of the tiles too much, either. They lack the "calming effect". It's like looking at a needle that may hurt you. I am not going insane about it but quite generally, I prefer designs without sharp corners. On the other hand, the variable/thumbnail content of the tiles is surely a good idea.

At least, I was lucky to find a recipe to close a tile application. You move the cursor to the upper-center position and, while the left button is pressed, drag the cursor down like if you were closing window blinds. It's intuitive but if you don't learn it somewhere, you will probably not discover how to do it.

So Microsoft was recently making changes that were expensive but not necessarily good according to the consumer's opinions. Another totally notorious example is Windows RT. It was very risky to produce a Windows system that isn't compatible with any other windows systems (this is necessitated by different hardware/microprocessors) and indeed, it was a failure. I think that Google – the company that isn't afraid to "retire" its services that were unsuccessful – is already thinking in a more market-like flexible way than Microsoft that just stubbornly continues with Windows RT and will surely waste billions on it instead of admitting that it was a losing idea.

Many of us have Windows PCs at home. They will be around for some time (most of the computers that are already on our desks are likely to survive for 5 more years) and some support may be available, too. But I do tend to agree now that this is already a "dead technology in the pipeline". We will probably be doing an increasing percentage of the usual PC tasks with tablets and smartphones that will mostly run Android and iOS or other systems successfully enough emulating Android and iOS. Those systems are effectively considered "free of charge" (Android has a Linux core so even though "Linux proper" belongs to the dumping ground of the history along with the left-wing movement that once frantically promoted it, and Linux isn't even being listed in recent surveys about the "market share", Android may be viewed as a relative who is turning out to be the ultimate survivor for a decade to come) and they're often better than Windows so if Microsoft will be unable to understand that this has to mean that Windows has to get better and cheaper at the same moment and earn the money by different methods, it's destined to go bust or become a company for a small group of users with a certain nostalgia.
Luboš Motl v 2:24 PM
Share