Today's Nobel prize in physics has been the most anticipated Nobel prize in any discipline for decades, especially because of the July 4th, 2012 discovery of the God particle, the most important finding in experimental particle physics in at least 30 years. 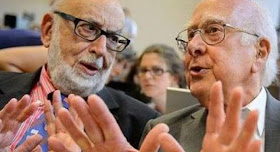 
The Belgian and British physicists finally won the prize:


“for the theoretical discovery of a mechanism that contributes to our understanding of the origin of mass of subatomic particles, and which recently was confirmed through the discovery of the predicted fundamental particle, by the ATLAS and CMS experiments at CERN’s Large Hadron Collider.”


See the advanced information about the prize on the Nobel Prize server (PDF) or a popular presentation (PDF).

At 11:40 am, I took the following screenshot of our Higgs Nobel poll because I needed 20 seconds to send the results to Carl XVI Gustaf, the monarch needed 3 minutes to run to the other side of his castle and call the Nobel prize committee, and some additional seconds were needed to finalize the verdict. In total, 5 minutes were needed.

The original announcement was scheduled for 11:45 am or later and 60 minutes were indeed added because Carl XVI Gustaf's dog ate the homework with the list of winners at 11:44 am and it had to be resent. 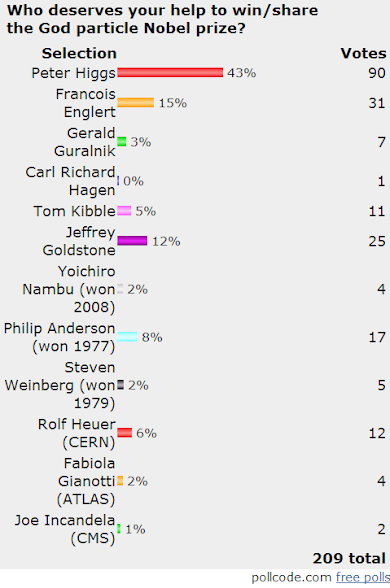 Out of the 209 votes collected among some of the TRF readers, the following contributors to the Higgs et al. mechanism were supported:
The remaining candidates, Guralnik, Weinberg, Gianotti, Nambu, Incandela, and Hagen received 7,5,4,4,2,1 votes, respectively. Extra 1+1+1 votes for Higgs, Nambu, and Goldstone between 11:45 and 12:45 didn't change anything important. At most 3 winners may be picked according to the dynamite inventor's rules. While I agree with Sean Carroll that the limit "3" is arbitrary and artificial, I can't overlook that he misses a more important point, namely that some rules have to exist that prevent inflation of the Nobel prize winners and that preserve their relatively exclusive status (well, relatively, because I have personally talked to 28 Nobel prize winners so far; one winner whom I talked to 10+ times, a very modest man, died 3 weeks ago, RIP David).


CERN live: See CERN Higgs Nobel webcast where CERN bosses comment on the prize – unless you are late


For that reason, prizes to large experimental teams sound undesirable to me. Prizes for their spokespersons are problematic as well because these spokespeople are largely political animals and a scientific Nobel prize shouldn't degenerate into a political one, into an inferior award similar to the Nobel Peace Prize or Nobel Literature Prize (the Economics Memorial Nobel Prize is an intermediate case). In my eyes, the Nobel prize in physics (and chemistry and medicine) are rare examples of prizes that haven't become ridiculous tools of politics or mediocrity and I believe that the committees behind these awards are expected to preserve this special status of the scientific Nobel prizes.

At any rate, the poll suggested Higgs, Englert, and perhaps Goldstone – and this, either with or without Goldstone, happened to be my choice I've been talking about for a year (see my public comment posted yesterday at viXra including Goldstone). François Englert has been my main "horse" whom I was promoting as a winner (not only because of his extensive and interesting work on supersymmetry, supergravity, strings, and branes); click at the link. During the announcement, Englert was called from Stockholm (they couldn't reach Higgs but he warned about his Tuesday invisibility in advance) and asked what are the remaining open issues once the Standard Model is completed. His answer was 1) whether there is broken SUSY at the LHC scale, 2) dark matter, 3) quantum gravity. Our man. ;-) He said it "wasn't very unpleasant" to have won the prize.

So I agreed with the TRF readers which was quite a reason for Carl XVI Gustaf and pals to make the same choice (well, without Jeffrey Goldstone, sorry), after the extra hour they spent by fighting against the contrarians.

Congratulations to the winners for their well-deserved prize – if they care about the prize. ;-)

If you're asking how it's possible that this long text was already published at 12:45 pm, well, I admit that it had been ready for hours before. I had two versions of this text, almost identical ones, that only differ by having Goldstone among the winners. ;-) (Dennis Overbye needed just an hour for a story.) But I was sure that the experimenters wouldn't be included etc. It's not because I don't admire or value the work of the experimenters but because their victory has been the result of heavily collective efforts and the Nobel prize was simply not created to reward large groups. (Joe Incandela, the CMS boss, wisely said after the announcement that for them, the prize is the discovery.)
Luboš Motl v 12:45 PM
Share