The announcement of the Nobel prize for the Brout-Englert-Higgs mechanism (Weinberg just said that he was sorry that Guralnik, Hagen, and Kibble couldn't share this prize; Migdal and Polyakov independently found the mechanism while playing with trucks in a Soviet kindergarten: they were 19; hat tip: John Preskill) doesn't mean that everything has been settled about the God particle's sector. The boss of CMS, Joe Incandela, said that he wasn't sorry that he didn't share the Nobel prize. His prize and his colleagues' prize was the discovery itself.

This isn't just a proclamation to look nice and Feynman-like before the 2014 Nobel prize in physics that he may still receive. ;-) It's how many people actually feel. And the CMS might discover something more revolutionary than just a single Higgs boson which is cool but it's so 1960s, too. Sometimes I take the perspective that the experimenters and theorists should be evaluated together and Brout, Englert, Higgs and the three pals above were just 48 years faster than ATLAS and CMS. ATLAS and CMS should get a Nobel prize for something that they find before the theorists! ;-)

Three months ago, I mentioned a bizarre 3-sigma excess in the search for the Higgs boson decaying to two photons. Aside from the Higgs boson of mass \(125.7\GeV\) that we have learned to know and love – and, in the case of two senior physicists, to use it as a credit card as well – there seemed to be an extra peak centered at \(136.5\GeV\). Moreover, it seems like the same excess appears in two disjoint channels.

If true, it's the second Higgs boson! Well, if the new particle will be indeed found and its spin is zero, I propose to call this particle the Brout-Englert boson and to reserve the term Higgs boson for the known boson of mass \(125.7\GeV\). ;-) Only Higgs fully realized that there was a new scalar excitation but Englert has been much more active in supersymmetry etc. so it wouldn't be a bad idea to call a SUSY-like particle related to the BEH mechanism after him (and Brout). There should be many more particles to be named after Georgi, Dimopoulos, Bill Gates, and a few others.

What I offer you today isn't equally strong (unlike the \(\gamma\gamma\) excess above, it isn't discussed as an excess in the paper) and I don't have a consistent interpretation but it's still interesting because a new peak sits at almost the same place.


I am talking about a freshly released preprint CMS PAS HIG-13-007,


The title talks about the muon pairs but they actually show a result for the electron-positron pairs, too. And it's the latter graph that is somewhat intriguing. 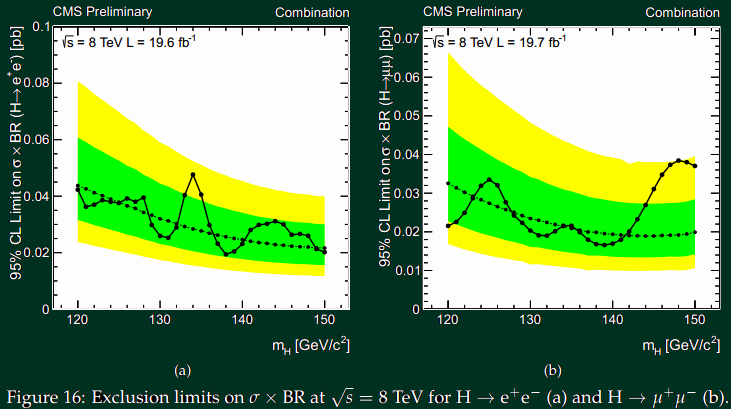 A much smaller peak appears for the same mass in the muon pair graph, too, although I would obviously never discuss such a small bump – smaller than other bumps – in isolation.

The tendency to produce the excesses near \(m_H=135\GeV\) surely seems interesting to me. However, I don't have a consistent enough story in the minimal supersymmetric standard model (MSSM). The coupling of all Higgs fields to the fermions is dictated by the Yukawa couplings which are determined from the fermion masses – in the MSSM case, it's done separately for the up-type quarks and for the down-type quarks along with the charged leptons.

In the MSSM, much like in the SM, the decay of the Higgs to electron pairs should be negligible. Well, the muon pair decays are "marginally" visible but the muon is 200+ times heavier than the electron. That means that the Yukawa coupling is 200+ times larger for the muon pair; and the decay probability (squared amplitude) is therefore about 40,000 times smaller for the electron pair final state than for the muon final state.

The ratio of the two doublets' Higgs vevs,\[

\] would have to be huge for the electron pair channel to show up: that would allow \(v_u\) to be tiny which is needed to keep \(m_e=v_d \cdot y_e\) tiny despite a very high Yukawa coupling \(y_e\). But then the muon pair would show up 40,000 more clearly. This disagrees with the data. Moreover, \(\tan\beta\gg 1\) has already been constrained by observations involving the bottom quarks, a discipline in which the Tevatron was competitive even in the last papers.

However, some non-minimal model in which the Higgs doublets are numerous and couple selectively and very differently to quarks and leptons, and perhaps differently to different generations of leptons (models with six or more Higgs doublets are omnipresent in string phenomenology), could account for all the excesses near \(135\GeV\). More intelligent comments than this blog entry of mine will be cordially welcome.
Luboš Motl v 6:31 PM
Share