A new episode of the dark matter detection saga was just broadcast live from Sanford Lab. LUX is a new direct detection experiment located in a South Dakota mine, not far from Mt Rushmore. Today they presented their results based on the first 3 months of data taking.


LUX is very similar to its direct competitor Xenon100. They both use a dual-phase xenon target, and a combination of scintillation and ionization photons to detect the collision of dark matter particles on nuclei, estimate the recoil energy, and separate dark-matter-like events from gamma- and beta-ray backgrounds.


LUX is about 2 times larger than Xenon100, but the shorter time of data taking means they have collected less kilogram-days so far. However, one advantage of LUX is better collection of photons appearing inside the detector, which allows them to lower the energy threshold for detection down to \(3\keV\) nuclear recoils. Thanks to this feature, they already managed to beat the Xenon100 sensitivity in spite of having less data. The improvement is marginal for high mass dark matter but becomes very significant for low mass (below \(10\GeV\)) dark matter which produces few photons when it scatters on nuclei. This last aspect was what made today's announcement so interesting.

Recently there has been several (partly contradictory) reports of possible detection of low mass dark matter, the most serious of which was the 3 events seen by the CDMS silicon detector. These signals were in tension with the Xenon100 results, but the low mass region is experimentally difficult and an independent confirmation was more than welcome. If the CDMS signal was really dark matter LUX should be literally swamped with dark matter events. Instead, what they see is this: 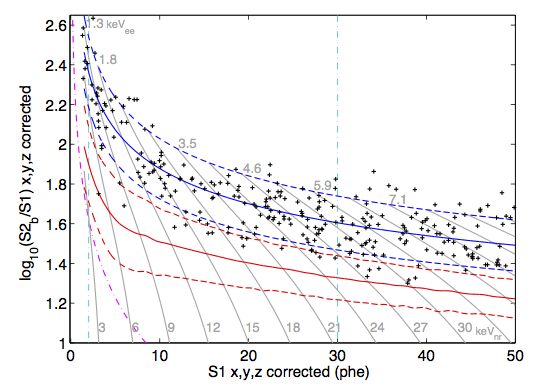 There's \(160\) events surviving the experimental cuts. They are plotted according to how many scintillation (S1) and ionization (S2) photons they produce. The background is expected to show up in the blue band, and the dark matter signal (characterized by a lower ratio of ionization to scintillation) in the red band. What can be found in the red band is perfectly consistent with leakage from the background region (note in particular that there is no events below the center of the band), with the \(p\)-value for the background only hypothesis at the fairly large value of \(35\%\). Translating that into limits on the scattering cross section of dark matter on nucleons results in this plot: 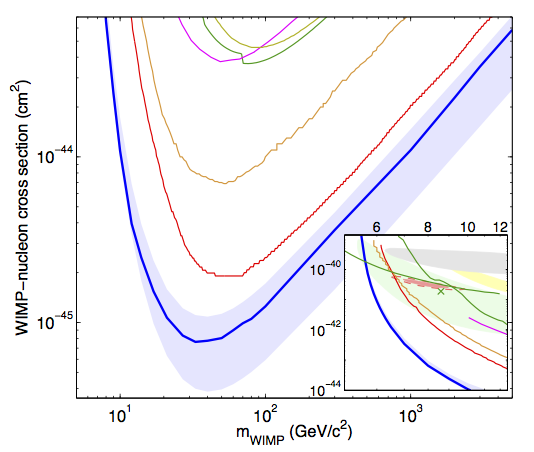 So, light dark matter signal has been hanging around for several years is basically dead now. Of course, theorists will try to reconcile the existing positive and negative results, just because it's their job. For example, by playing with the relative couplings of dark matter to protons and neutrons one can cook up xenophobic models where dark matter couples much more strongly to silicon and germanium than to xenon. But seriously, there's now little reason to believe that we are on the verge of a discovery. Next time, maybe.

The LUX paper is here. Well, it's already on the arXiv (note by L.M.).