All data refer to the Northern Hemisphere

A blog named Sunshine Hours calculated some slopes in a simple case of linear regression: the warming or cooling trends in the last \(7\times 12=84\) months (since September 2006) restricted to each of the 12 months in a year according to HadCRUT4, the latest version of the British leading weather-station-based global temperature dataset:

The results look sort of shocking.


Here is the more detailed table of the trends (the numbers 1-12 indicate months from January through December):
It almost looks like the monthly numbers are smooth enough – and they're positive for warmer months (only +2.6 °C per century is the highest positive figure, for June) and negative for cooler months (December's –9.1 °C per century is shocking but January stands at –7.3 °C per century which is not bad, either). Numerologists will surely be intrigued by the fact that ±1.7 °C appears four times among the 12 entries (after my rounding) which seems like too often. ;-) 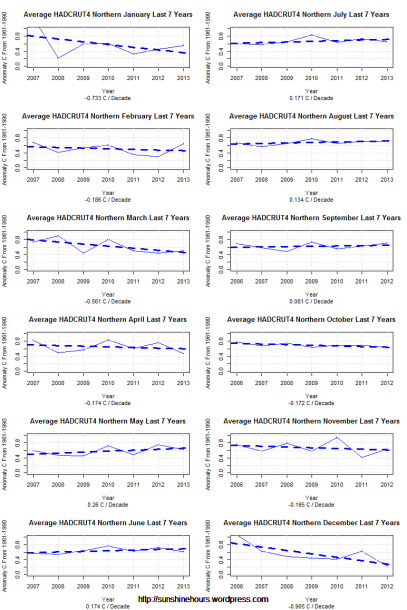 The graphs for the individual months. Click to zoom in.

This mostly cooling trend since 2007, the peak of the climate hysteria, is rather symptomatic. ;-)
Luboš Motl v 6:24 PM
Share