The broadcast starts at 4 pm Prague Winter Time. More info about the event. TRF doesn't say whether I endorse Mt Rushmore in SD; see Penn and Teller to restore some balance. ;-)

The paper (you can only read it if you're a LUX member) probably says "strong nothing", I've heard.

Originally posted on October 16th
The dark matter particle may become visible to us in 14 days; or even darker

One of the potentially coming discoveries in particle physics is – no, it's not the discovery what happens when you hit the debt ceiling, it is – the discovery of the dark matter particle.


Update (October 24th): One week from now, we will know what LUX is going to tell us. What's your guess? Answer in this poll:


Approximate results after 250 votes or so: 59% nothing, 27% light new particle, 8% heavy new particle, 7% something else. The majority was right.


A war has been taking place between (and within) direct dark matter search experiments. Some teams claim that they have already glimpsed the evidence for a dark matter particle that would be surprisingly light – beneath \(10\GeV\) (I like to quote the figure from CDMS II-silicon, \(8.6\GeV\)). Others, most notably XENON100, keep on imposing upper limits on the cross sections and shout that everyone who has claimed a discovery must be wrong. 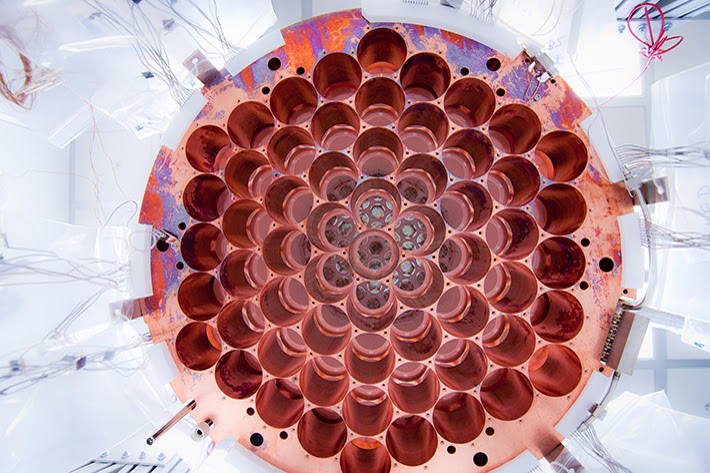 LUX in South Dakota is a new player in the war that's been collecting the data for a couple of months. We were promised the first results before the end of 2013.

Ladies and Gentlemen, the moment is coming; it's exactly two weeks away.


SanfordLab.org has released a press release informing us about a media event on October 30th where the first results of LUX will be announced.


LUX should have been more powerful than many of the "Yes camp" experiments (which include CDMS [Si target], CoGeNT [Ge target], DAMA/Libra [Na-I], maybe CRESST-II [Ca-W-O]). If it will say "No", it will be a pretty powerful "No". I actually think that it's somewhat more likely than not that the announced result will be the exciting "Yes" (because the CDMS II-silicon events look highly persuasive to me; and because the planned South Dakota media event seems rather ambitious, with an extra day, October 29th, of preparations and pre-visits and a speech by the South Dakota governor, among other things). But I am extremely, extremely far from any certainty in one way or another. At any rate, it's probably unnecessary to point out that the "Yes" announcement would be far more groundbreaking than the "No" announcement.

As far as I can say, the best available explanation of the particle on the market involves a SUSY model with a light neutralino and a light sbottom. The stau could also be light.

Incidentally, on Monday, October 21st, it will be 20 years since the vote in which the Ronald Reagan Collider, also known as the Gippertron and Desertron (sometimes called the SSC by the leftists), was cancelled. David Appell is an unbelievably obnoxious jerk and I learned to use GMail filters because of him but he wrote a pretty insightful piece for SciAm about those frustrating developments two decades ago.
Luboš Motl v 4:00 PM
Share