The author is an Israeli astrophysicist and cosmoclimatologist, blogging at sciencebits.com

The IPCC summary for policy makers is out, and as I started writing these lines so was the last draft of the main report. Of course, it will take a while to digest the 2200 pages of the full report (it has a lot of starch!). Until I do, here are my first impressions from having read the summary and having skimmed the full scientific report.


My main conclusion is that this report is to a large extent a rehash of the AR4 report. However, given the lack of any new evidence pointing to humans and the increasing discrepancy between the alarmist models and predictions, the IPCC authors are bluntly making more ridiculous claims as they attempt to fill in the gap between their models and reality.


One of the statements which wonderfully exemplifies the absurdity of the new report is this paragraph discussing the climate sensitivity in the summary for policy makers. They write:


“The equilibrium climate sensitivity quantifies the response of the climate system to constant radiative forcing on multi-century time scales. It is defined as the change in global mean surface temperature at equilibrium that is caused by a doubling of the atmospheric CO2 concentration. Equilibrium climate sensitivity is likely in the range 1.5°C to 4.5°C (high confidence), extremely unlikely less than 1°C (high confidence), and very unlikely greater than 6°C (medium confidence) 16. The lower temperature limit of the assessed likely range is thus less than the 2°C in the AR4, but the upper limit is the same. This assessment reflects improved understanding, the extended temperature record in the atmosphere and ocean, and new estimates of radiative forcing.”


Now, have you noticed something strange? According to the AR4 report, the "likely equilibrium range of sensitivity" was 2.0 to 4.5°C per CO2 doubling. According to the newer AR5 report, it is 1.5 to 4.5°C, i.e., the likely equilibrium sensitivity is now known less accurately. But they write: “This assessment reflects improved understanding”. How ridiculous can you be?

More seriously, let me put this in perspective with the most boring graph I have ever plotted in my life. Below is the likely range of climate sensitivity as a function of time. As you can see, with the exception of AR4 with its slightly smaller range mentioned above, the likely range of climate sensitivity did not change since the Charney report in 1979. In other words, after perhaps billions of dollars invested in climate research over more than three decades, our ability to answer the most important question in climate has not improved a single bit! 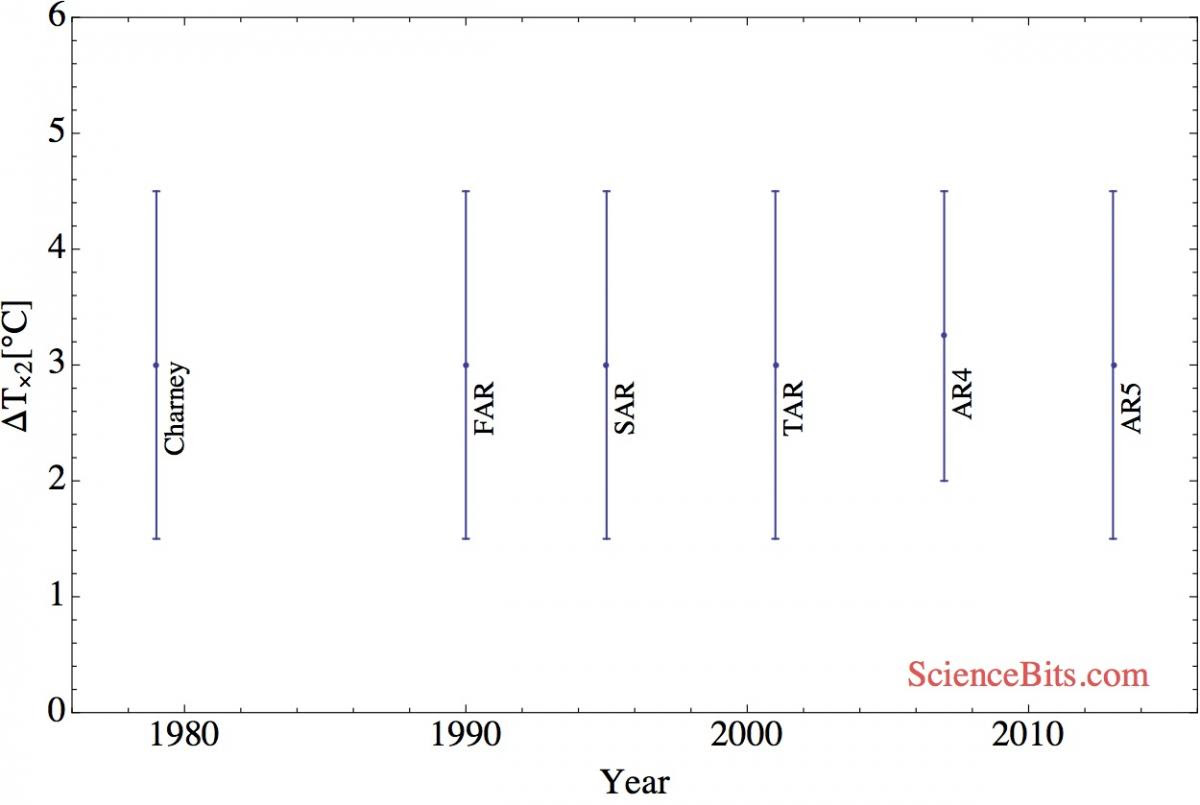 One reason for the lack of improved understanding could be incompetence of the people in the field. That is, all the billions of dollars invested in climate research were not or could not be used to answer the most important question in climate, one which will allow predicting the 21st century climate change. I doubt however that this is the real reason. Among the thousands working in climate research, surely there are at least a few who are competent, if not more.

I think the real reason why there is no improvement in the understanding of climate sensitivity is the following. If you have a theory which is correct, then as progressively more data comes in, the agreement becomes better. Sure, occasionally some tweaks have to be made, but overall there is an improved agreement. However, if the basic premises of a theory are wrong, then there is no improved agreement as more data is collected. In fact, it is usually the opposite that takes place, the disagreement increases. In other words, the above behavior reflects the fact that the IPCC and alike are captives of a wrong conception.

This divergence between theory and data exactly describes the the situation over the past several years with the lack of temperature increase (e.g., as I described here some time ago). It is also the reason why the IPCC had to lower the lower bound. The discrepancy is large enough now that a climate sensitivity of 2°C is inconsistent with the observations. However, under legitimate scientific behavior, the upper bound would have been decreased in parallel, but not in this case. This is because it would require abandoning the basic premise of a large sensitivity. Since the data requires a low climate sensitivity and since alarmism requires a large climate sensitivity, the "likely range" of climate sensitivity will remain large until the global warming scare will abate.

Incidentally, if one is not a captive of the high sensitivity idea, then things do converge, but they converge towards a climate sensitivity of about 1 to 1.5°C per CO2 doubling.

A second important aspect of the present report is that the IPCC is still doing its best to avoid the evidence that the sun has a large effect on climate. They of course will never admit this quantifiable effect because it would completely tear down the line of argumentation for a mostly manmade global warming of a very sensitive climate. More about it in a few days.
Luboš Motl v 6:24 PM
Share