In March 2013, ESA's Planck telescope – launched in 2009 – brought us the most accurate cosmological data about the Universe. Last year, the unit became mostly useless as it ran out of helium (the coolant) and the cruel European Space Agency is putting the gadget down now (BBC). 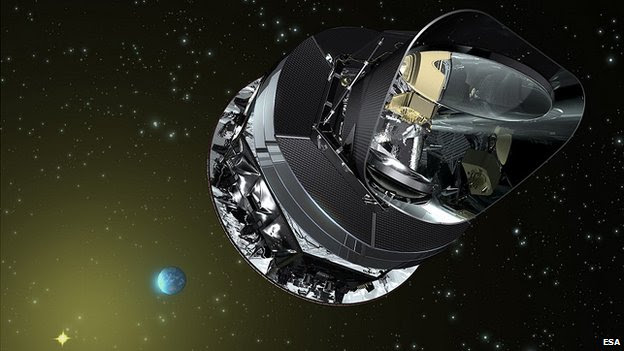 Recall that the telescope was working at the L2 Lagrange point, about 1.5 million kilometers away from the Earth in the opposite direction than the Sun. Because ESA is so cruel, they decided to make the funeral thorough.


Today, Planck is scheduled to burn the fuel for the first time. On Monday, October 21st, they will burn it for the second time. The two maneuvers will kick the spacecraft out of the L2 Lagrange point and then to an independent orbit.


ESA seems highly determined to make sure that all the batteries are disconnected, all the fuel is burned, and the device will never be ready to be reactivated again. I don't understand these desires to make their euthanasia so perfect. They suggest that they're scared that the fuel tanks could explode. What a big deal if an explosion like that would take place millions of kilometers from the Earth (and from other satellites).

And why are they so obsessed with the idea that the device will never be resuscitated? It sounds almost as hostile as the U.S. Congress that decided to ruin the SSC tunnels so that even mushroom growers couldn't succeed with their alternative plan to use the already existing SSC's tunnels (worth $1 billion). They just hated the SSC so much that even hopes that it could be revived in the future had to be killed.

To say the least, I can't get rid of the feeling that such desires to make the liquidation "perfect" are both hostile and counterproductive. In the future, some fuel located millions of kilometers away from the Sun may be found useful – to fight against asteroids, aliens, or whatever ;-) or, more realistically, to allow another probe to refuel.

At any rate, the Planck telescope's active life is over but that doesn't mean that we have already extracted all the data that the telescope should give us. Quite on the contrary, much of the data will be published in the following year – through Summer 2014.

Polarization of the CMB

One of the things it should shed some light on are the B-modes in the cosmic microwave background. Note that in astronomy, it's sometimes fun to look whether the incoming light is polarized. Linear polarization often arises by reflection from the dust; circular polarization is created when light goes through powerful magnetic fields etc.

The cosmic microwave background (CMB) is also known to be slightly polarized, despite its being mostly thermal, but the known polarization is mostly described by the E-modes ("E" stands for "electric"). Much weaker B-modes ("B" stands for "magnetic" – or "bagnetic" if you can't find "b" in the word "magnetic") are harder to be seen. However, in a development 10 weeks ago that I forgot to mention on this blog, the B-modes were finally seen


by the South Pole Telescope (SPT). These modes are the "leading ones" which are fully theoretically explained by gravitational lensing; the B-modes depend on the mass distribution in the Universe. However, weaker components of the B-modes may be created in more complicated ways and they may be used to check some features of cosmic inflation. In this context, the leading B-modes are the background that has to be subtracted when we want to find gravitational waves which would have profound implications for the cosmic inflation and its competitors.
Luboš Motl v 10:48 AM
Share