An Israeli newspaper, The Jerusalem Post, finally noticed the current visit of the Czech president Miloš Zeman to Israel.

The article describes some of the actual depth of the Czechoslovak and Czech support for the Jewish state. The new Czech president – who has always been comparing Arafat to Hitler and who recommended the NATO to invite Israel and redefine the purpose of the organization as a group fighting against the Islamic Anticivilization, an empire stretching from Northern Africa through Indonesia that is partly funded by oil and partly by drugs – made the proposal to move the Czech embassy from Tel Aviv to Jerusalem a few days ago.


While the Prague Castle and the technocratic Czech government in resignation tried to soften the impact of the claims, it's plausible that Zeman will reiterate his ideas about the embassy tomorrow or soon afterwards. His visit began today and it will last for 4 days.


Note that Italy was close to moving its embassy to Jerusalem but there's just a general consulate over there while the embassy stayed in Tel Aviv, just like other embassies. Similarly, the U.S. Congress passed the Jerusalem Embassy Act in 1995 but presidents Clinton, Bush, and Obama agreed that it's not a business of the Congress to decide about similar matters so the bill hasn't come into force de facto. Only Italy and U.S. have consulates in Jerusalem; Bolivia and Paraguay are the only countries that have embassies in Jerusalem (suburbs).

It's somewhat more likely that Czechia would actually act and move the embassy to the city that Israel considers its own capital. But the whole plan may turn out to be nothing more than a rhetorical exercise and theater of our president that may at most strengthen the morale of the Israeli. 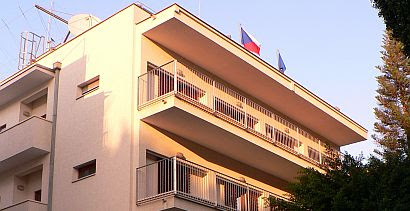 This boring low-key building in Tel Aviv doesn't necessarily reflect the importance of the Czech-Israeli ties.

The Palestinians have protested against Zeman's words. That includes the Palestinian peace negotiator Saeb Erekat who claimed that the Czech Republic would undermine the peace process by this relocation. That's a bizarre statement given the fact that pretty much all the people claiming to work on the peace process in the region publicly agree that at least a part of Jerusalem should always remain under the control of the Jewish state and a third country is simply trying to move the embassy to an agreed upon place that the host country considers more appropriate for such buildings.

But maybe some people aren't sincere when they say that they actually want to preserve any Jewish control anywhere in Jerusalem. Or anywhere in the Middle East, for that matter.
Luboš Motl v 5:34 PM
Share