I was surprised how widespread the misunderstanding of Eugene Fama's observations about the economy was. Fama explained that the QE program is just about buying one type of bonds for others so its effect is similar to removing $100 bills from the circulation and replacing them with a 10 times greater number of $10 bills: the effect is pretty much non-existent.

See also my polemics with the Pig.

Critics of these insights seem to be grouped into two not quite disjoint sets – those who believe that the Feds' permutation games are extremely helpful for reviving the economy and those who believe that those things are extremely dangerous. But despite the apparent differences in the sign, the misunderstanding by both groups has the same origin.

It's hard to summarize what the reason for their misunderstanding is. But I would say that they don't realize that bonds are a kind of "money", too; and they don't understand that the balance sheet isn't "wealth" or "equity" or "debt" because it's just some unphysical number that is immediately subtracted from itself, yielding zero for the quantities that actually matter. So it doesn't matter whether you increase your balance sheet. If you print $50 trillion and lock the bills in the basement, the effect on the economy is zero even though you may boast that someone (you) owes you $50 trillion.


In this post, I want to discuss the claim that you can't beat the stock market – and that the markets are basically efficient. In other words, I will bring you some Mathematica calculations to test some nice quotes by Fama that I fully endorse.


That page is pretty short, so why wouldn't I copy it here:


Eugene Fama Speaks, So We Listen

Eugene Fama, The Living Legend Of Modern Portfolio Theory, Hits On Some Key Points That Every Investor Should Know At Recent IMCA Conference.

“Active management is a zero-sum game before cost, and the winners have to win at the expense of losers,”

“I can’t figure out why anyone invests in active management, so asking me about hedge funds is just an extreme version of the same question,”

- The Market Appropriately Prices Assets - Concentrate On What You Can Control, Costs And Taxes

“Since I think everything is appropriately priced, my advice would be to avoid high fees. So you can forget about hedge funds”

“The Fed is using one kind of bond to buy another kind of bond. What’s the big deal, and why is anyone taking the Fed seriously?”


Good. Now, can you design some strategies to beat the market? For example, do the stocks move in the random-walk fashion? Can't you just buy the stock that was growing yesterday and make a profit today? Or the other way around?

Using Mathematica, we take the 30 stocks in the Dow Jones Industrial Index


and we list all of their closing prices since January 1st, 2000:


Yup, I took the natural logarithm of the prices so that multiplicative changes are transformed to additive ones and they're unbounded in both directions.

I calculated the day-to-day (session-to-session) changes


–36 percent to +30 percent growth rate per day (note that these numbers, 0.64 and 1.30, have to be exponentiated to get the actual factor by which the prices grew or dropped). To get rid of some of the extreme events, I eliminated the rates above plus or minus 10 percent:

Now, what does the histogram of the session-to-session changes look like? 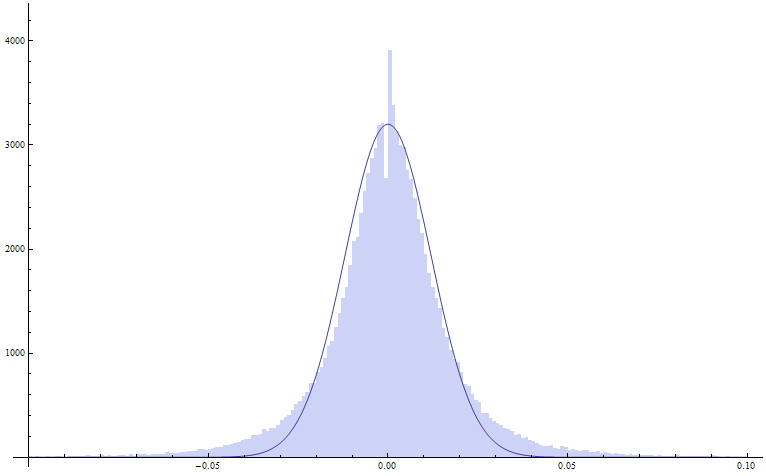 You see that the histogram looks really smooth up to some strange teeth near the daily change zero (some effects of rounding or overrepresentation of zero-changes in sessions that saw no trading? I am not sure about the exact reason but I am confident that there has to be an explanation). The distribution (shown between the rates minus and plus 10 percent) isn't far from a Gaussian one but it is detectably non-Gaussian, too.

I believe that there are three main reasons behind this non-Gaussianity.
You are invited to quantify how much each of the factors above influences the non-Gaussianity of the outcome – and find other sources of it. Note that the curve drawn on top of the histogram had 7000/2 in the exponent. That is 1/2 times the inverse squared standard deviation. The square root of 1/7000 is 0.012 which means that the root-mean-square average change of the session-to-session stock price in Dow Jones is about 1.2%. Sometimes it goes up, sometimes it goes down, sometimes it's more, sometimes it's less.

But the final point I want to make isn't related to the non-Gaussianity. I want to show you what would happen if you traded with the assumption that
If the first idea is right, it would be clever to buy the stocks that were growing yesterday. If the second idea is right, you should sell or short stocks that were growing yesterday and buy those that were decreasing. You surely get the point. Do you believe in either? Either situation would mean that the stock prices don't follow a random walk – they're non-Markovian. Are they?

Well, let's see. This are the commands that calculate the sum and the difference of two subsequent session-to-session changes of the price:


Recall that "d" contained all the session-to-session changes (the logarithms of the price ratios) so "e1" really counts the changes between today and the day after tomorrow while "e2" is the difference between the Monday-to-Tuesday and Tuesday-to-Wednesday changes. If either of the Markovian ideas is right, the absolute value of the numbers in the "e1" array would be detectably higher than for "e2" or vice versa.

I added the simple factor of the inverse square root of two because a random walk simply predicts that the characteristic change in 2 sessions is equal to the square root of two times the characteristic change in one session. The random walk predicts that "e1" and "e2" will have comparably wide histograms that will be as wide as the histogram of "d" if you add the factor I added.

What is the result? The relevant command is 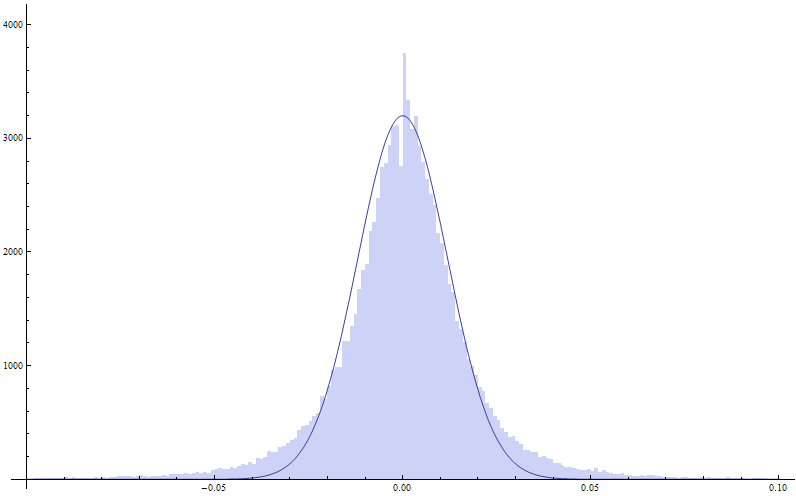 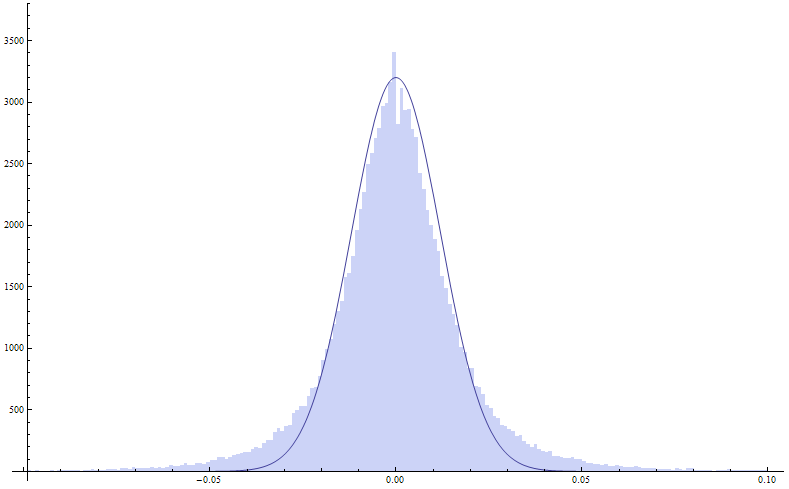 Visually, all of them are really the same. The distributions are equally wide and they're as wide as the distribution of "d" we started with. It doesn't matter whether you add or subtract the two adjacent session-to-session changes because their signs (and their magnitudes including the sign) are uncorrelated.

Moreover, all three of them look pretty much equally non-Gaussian.

So if you were thinking about borrowing millions of dollars to realize a simple strategy – just buy the stocks that were increasing yesterday (or, on the contrary, buy the stocks that were dropping yesterday) – the histograms above should convince you that you are going to participate in nothing else than a lottery. It is a zero-sum game. Moreover, you may pay some fees which will turn you into a loser in average.

This simple calculation only quantified the comparison of two day-to-day changes of the stock prices and a simple strategy based on correlations of the two adjacent changes at this timescale. You could design other strategies, perhaps more sophisticated (or more contrived) ones, but all of them will ultimately fail. The stock market is a random walk and the deviations from the non-Gaussianity have understandable reasons that don't allow you to make a profit, either (because the motion of individual companies per 24 hours is mostly Gaussian; and the non-Gaussian, larger-than-expected changes are ignited by external events that have both signs and you can't predict them, either).

Even if you found some pattern in the 13.83 years of DJIA data, you would always be at risk that it won't work in the following years. Even if such a pattern were more than a coincidence – if it had some rational reason – you would be at risk that someone else is seeing the pattern as well and will do lots of trades recommended by this strategy before you do them. If that's so, you will already be buying or selling for prices that have increased or decreased and they no longer generate the profit you were hoping for – and they may produce a loss.

The invisible hand of the markets work – and optimizes the prices and economic activity, usually rather quickly. Some traders may detect imperfections of the market behavior and gain profit out of them but the more traders are doing such things, the less profit they may make. The more accurate calculations of the "right price" or "estimated price tomorrow" etc. they are doing, the smaller is the profit margin. The residual deviations from the "right prices" are increasingly random and patternless.

Pretty much all the people who are making a long-term, systematic profit of a similar kind have 1) either been lucky even if they allow the luck to be interpreted as a talent, 2) have some access to some insider information, 3) have a monopoly or near-monopoly in their access to some trading tools (e.g. computers close enough to some servers of a stock exchange, something that gives you a huge advantage in fast trading).

Most other things are superstitions.

The efficient, "fair" character of the prices and the random character of the "deviations" coming from inefficiencies imply that the trading using various strategies is a form of lottery. The profits may be nice but the losses may be also large (not too nice) and if one calculates the expectation value, one may be sure that the fees make the expectation value (more) negative. So with a sufficient number of transactions (e.g. buying and selling a particular stock at times that you believe to be optimized), most of the profits and losses will cancel but no one will return the fees. ;-)