Bitcoin will probably keep on skyrocketing

Disclaimer: I own no bitcoins while I am writing this blog post.

Bitcoins, a virtual currency, were proposed in late 2008 and started in early 2009. Those who have been in it for a year or more have seen remarkable returns – something like 8,000-percent returns in a year. Most of us have missed this opportunity but it's completely plausible that the rise will continue. I want to discuss these issues. 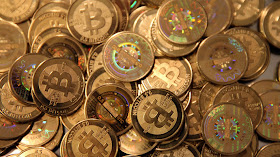 The bitcoin is a unit of wealth stored in the solution to a difficult mathematical problem that needs the brute force of computers to be found. So some computers are working to "mine" this new kind of gold. This gold, when found, may be transferred to others. You may sell actual products for bitcoins.


My experience is zero but perhaps, I would recommend you an online wallet service like coinbase.com


People who use the bitcoin payments often store the full blockchain – a multi-gigabyte public ledger that remembers all the transactions in the world (this will surely get highly impractical if the currency keeps on expanding). How many coins are there? How is their number evolving with time? What will the bitcoin-dollar exchange rate be doing?


The defining rules say that when you find another solution of the mathematical problem, you will not necessarily earn the same number of bitcoins as when you solved a previous one. Computers may be getting faster, more computers may be ordered to do the calculations, and so on, so this could lead to inflation.

Currently, the number of bitcoins that exist is 12 million. To calculate their number \(N(Y)\) at moment \(Y\), the year treated as a continuous number, roughly speaking\[

The current value of one bitcoin is \(\$1,000\) or so which means that about 12 billion dollars are currently stored in all the bitcoins of the world. This represents the increase by 1 order of magnitude in half a year (a bitcoin was worth below \(\$100\) sometime in Spring 2013) and 2 orders of magnitude in less than 2 years.

Most of us don't even know how to install the client to own bitcoins etc. so this is a "different world" and the profits we haven't realized are hypothetical. But the people who installed the software a year ago and spent their bitcoins instead of saving them must feel upset: the wealth would have risen 10 or 100 times in half a year or less than two years.

Is there some potential for a further growth of the bitcoin's value? I think that the answer is almost certainly Yes. Why? Well, if we ignore all the traps to be disussed later, the bitcoin may be used as a currency and the limited number of bitcoins that may exist – at least after much more than 4 years when the deviation from the ultimate number 21,000,000 becomes negligible – guarantees that there can't really be any positive inflation if the bitcoins are used.

Unless the bitcoins are banned or otherwise destroyed, an increasing number of people in the world will think that it's a good idea to store an increasing percentage of their wealth in the bitcoins. And it's just a fact that this percentage is so far negligible, despite the 8,000% growth of the bitcoin's rate in the last year or so.

The average adult in the world approximately owns $50,000 of wealth but he or she has around $2 in the bitcoins so far, using the current exchange rate. I find it sensible to imagine that the percentage will increase so that the average person will store not $2 but e.g. $200 in the bitcoins. Another growth by two orders of magnitude sounds totally plausible. Or more than that. Or fewer. There's no hard science to predict the future rates because it will depend on people's psychology and mass hysteria.

The exchange rate could jump to this value – $100,000 per bitcoin – immediately. But the people who already have bitcoins just don't want to spend too much, partly because someone may "kill" the whole bitcoin industry, partly because they have some psychological prejudices telling them that a "growth rate faster than XY is too much". But if the industry isn't killed, the fast and persistent growth of the value may continue.

With this growth of the bitcoin's value, prices expressed in bitcoins will keep on plummeting. In other words, one will have deflation. If you expect deflation to continue, it is stupid to spend the money (bitcoins). It's better to use something else to pay for your food – for example, to sell your house and use it to cover your expenses.

That's why everyone would like to sell his services for bitcoins but almost no one will actually offer his bitcoins for actual goods and services. No one will pay predetermined wages in bitcoins (because the value of such a salary might go insanely up); no one will borrow bitcoins, either (no loans!), or make other commitments to pay XY (fixed number) bitcoins in the future. This hoarding of the deflating currency (bitcoins) means that the currency isn't really circulating much. It's only used as an alternative part of people's portfolios for savings and its alternative status is here forever (unless the project is abandoned or killed).

However, someone may be hypothetically offering bitcoins for your work. At some point, the total amount of wealth stored in bitcoins may stabilize – which will pretty much mean that the deflation/inflation rate will return back to sensible values around 0%. At that moment, the bitcoins might look as a usable currency for your business.

That will only be the case for a while because it's ultimately clear that the zero inflation isn't good enough. If you know that the prices will deflate in the long run, it's better to hoard the bitcoins. At some moment in the future, the number of newly produced bitcoins will be more or less negligible and the people or companies that already own the bitcoins will keep them. It's likely that they will be very rich but there will be almost no trading.

Ultimately, people may realize that a deflating currency has no long-term future and it won't replace dollars etc. due to the hoarding. So the currency may start to lose the attractiveness and value, too. Assuming that the industry isn't killed, I do expect another impressive growth but I ultimately do expect the fad to go away, too.

One thing will be here to stay: volatility. Whether you like it or not, the prices (and wages) expressed in ordinary currencies are stable because the numerical values are written in various contracts and on stickers – and it's not straightforward to rewrite the stickers all the time – or because someone actively "regulates" the currency (e.g. by inflation targeting or GDP targeting).

If all the calculations of the prices becomes electronic and dynamical, there's no real reason to expect stability of prices (or wages). There's no reason to expect any stability of prices (or wages) expressed in the bitcoins. No one is targeting the inflation rate. No one is doing anything else that would keep the value of the bitcoins nearly constant (relatively to products and services or at least relatively to well-known currencies which are quasi-constant). So if there's nothing that would remove the volatility, the volatility will exist.

To summarize, I do think that it's a fair idea to be using electronic currencies and "automatic" policies that determine their values. But I think that the "macroeconomics" behind the bitcoins is flawed. Because it has absolutely no mechanisms that would encourage price stability, the overall prices – and the value of the bitcoin – will never be stable and this is a huge vice for a currency that would like to be used in most everyday and other transactions. A good electronic currency should be based on some mechanisms that pretty much target the inflation rate.

But people will probably have to learn about the bitcoins' lethal vices in the hard way and the price of the bitcoin will probably continue for quite some time – by some order of magnitude or more – before the bubble pops and people abandon it. There will be many winners, especially the winners who already exist, but there will also be many losers.

Now, you would surely love to know what the maximum value of a bitcoin will be and when it will be reached. I don't know. But I think it will be very high and it will appear when a vast majority of the bitcoins are already "out there" – simply because people are irrational or stupid and the very fact that with the current rules, bitcoins can't be used as the world's main currency, will remain controversial for years (it will be as controversial as it is today). So lots of people will play with the idea that it could be a main currency which means that a sizable fraction of the mankind's wealth may be moved to the bitcoins before the maximum is reached.

But most responsible companies and market players won't translate their prices and debt and incomes to bitcoins. Because only a minority of the wealth will be stored in the bitcoins at every moment and because the price of the bitcoin will always be dominated by speculators who don't have any "objective guide" what the price should be, the volatility will be here forever.

I want to say one more thing. The very concept that "new bitcoins may be mined" was designed in order to allow an increasing number of people to be "sucked" into this Ponzi scheme. But for the actual value of the bitcoin, it's pretty much irrelevant already today because over 50% of the ultimate bitcoin number already exists. So the potential for drop due to new bitcoins is less than a factor of two while the speculative bubble may still add orders of magnitude. For this reason, it's already a good approximation to neglect the fact that new bitcoins are being mined. This fact is only important for the marketing – to make new people interested. The real question is what percentage of mankind's wealth people are ready to store in an alternative currency that may never become the "main currency" due to its intrinsic volatility which prevents it from being accepted by people and companies who have to financially plan (i.e. by almost everyone).
Luboš Motl v 11:52 AM
Share