About seven weeks ago, I wrote about the 75th anniversary of the Munich Pact. Britain and France thought that it was a wonderful idea to appease the Third Reich by throwing a third of their ally's territory to Hitler's throat.

An event that occurred seven weeks later, the Night of Broken Glass (November 9th-10th, 1938), adds some clarification concerning the character of the new friend of Mr Chamberlain and M. Daladier.

Comrade Goebbels "overinterpreted" a murder of a young German diplomat (Ernst von Rath) – allegedly by a Jewish teenager (German-born Polish Jew in Paris, Herschel Grynszpan; yes, it looks like the same surname as Alan Greenspan's). This murder had nothing to do with anti-German sentiments; the teenager was simply fairly punshing the the German embassy for its continuing bureaucratic terror against himself and his relatives. Within hours, hundreds (267) of synagogues and thousands (7,500) of Jewish businesses plus Jewish hospitals and schools were looted, ransacked, and pretty much destroyed or burned to the ground. 30,000 Jews were arrested and transferred to concentration camps. 91 Jews died.


I find it kind of amazing that it took 10 extra months for Britain and France to declare war against Germany.

Those barbarian acts have occurred on the whole temporarily extended territory of Germany, including Austria and Czechia's Sudetenland.


What did it look like may be seen on the example of Liberec, a North Bohemian city of 100,000 or so today (German: Reichenberg; population in the 1930s around 40,000). Before the war, about 1,600 Jews lived there; only 37 of them have avoided death in the extermination and concentration camps. 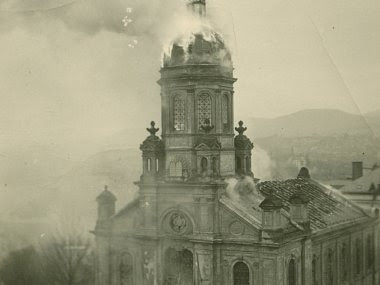 The synagogue in Liberec was put in fire, too.

All these acts by the Nazi rabble were pretty much sponsored by the ruling party in the Third Reich (although the official sources were trying to obscure these connections). I wonder whether Europe would react differently if similar events occurred in 2013.

It's sometimes being said that the Kristallnacht marked the beginning of the Holocaust. Well, I think that it only brought the process to a new level because many totally unacceptable things were happening much earlier than that. Well, Joseph Goebbels ordered a nation-wide boycott of the Israeli... I mean Jewish services already in 1933. Some people continue to organize practically identical boycotts even these days.

This whole hysteria seems totally irrational to me. As the video above points out, the Jews only represented about 1 percent of the population of Germany, they were largely loyal citizens, tended to quickly assimilate, and many of them fought for Germany in the First World War.

Nevertheless, they were miraculously blamed for everything that the German socialism considered evil – for capitalism, for communism, for inflation, and so on – quite a mixed bag, indeed.

Ninety years ago, Adolf Hitler attempted to overtake the power for the first time – by attacking a brewery in Bavaria in the so-called Beer Hall Putsch. In those good old times, a loser like himself (who had understandably found no allies) would spend five years in the prison (he was released after 9 months, for having been an obedient clown) and that would be the end of a similar painful story. Some weird changes (including the publication of An Inconvenient Truth in 1926, oops, I mean Mein Kampf) and problems in the 1930s allowed this ultimate loser to take power in Europe's most powerful – and, to a large extent, most sophisticated – country. An educated, insensitive primitive was suddenly good enough for a leader.
Luboš Motl v 10:48 AM
Share