EU will throw €180 billion to the climate loo

Jo Nova has pointed out that the European Union plans to spend a staggering 20% of its budget for the years 2014-2020 for totally wasteful projects justified by nothing else than the climate pseudoscience.

You should understand that the EU is just an international structure "above" the member states so its budget is a small fraction of the total budgets of the individual governments. But the figure 20% still translates to unbelievable €180 billion i.e. €30 billion a year. And be sure that the EU clowns would love to be "role models" for national governments in the whole world, anyway.


There are lots of media that confirm these sick numbers.


Ordinary people sometimes have trouble to visualize amounts such as this €180 billion that is going to be wasted. Let me pick a particular project to compare: a railway modernization project that starts in the neighborhood of Pilsen where I live, Doubravka.

This promotional video is a part of the project.

For various reasons, the path of the Pilsen-Prague railways tracks is suboptimal and it takes almost 2 hours to get from Pilsen to Prague (main railway station to main railway station) by an express train. It's still sort of pleasant to take a train – castles, forests around the tracks etc.

At any rate, by 2020, the Pilsen-Prague tracks will be improved so that the time needed to commute will essentially drop to 1/2, not too much above one hour! The most important update is the modernization of the Pilsen-Rokycany segment (the direct distance is 15 km) which is described in the video above.

Some part of this path is composed of two sides of an unilateral triangle ABC, AB plus BC, and it will be replaced by AC, saving 10 minutes by itself even if you don't speed the trains up. But the better tracks will enable even higher speeds, and so on.

The modernization of the Pilsen-Rokycany segment involves the reconstruction of several bridges, some new railway station, completely new tracks almost everywhere, and – most importantly – a 4.2-kilometer "double" tunnel which will become the longest railway tunnel in Czechia in 2016 for a few years, before it will be beaten by two almost 5-km tunnels in 2019-2020.

I have doubts whether similar modernizations are a good investment – trains are mostly used by people who may afford to spend an extra hour in the train, you know. As an undergraduate student who lived in the hostels in Prague, I have taken the Pilsen-Prague train something like 30 times a year (times two, for directions, times 5, for years), so if this project had been completed at that time, I would have saved something like 300 hours of my life which is not Earth-shattering and I was clearly among those who have used the railway much more than an average citizen of Pilsen, Prague, or (surely) other regions.

But no doubts about that, I was still immensely impressed by the total price of this project. In most cases, I tend to think "holy cow, that's expensive: most of the money goes to the pockets of the people who have friends in the city hall", and so on. But this project looks genuinely cheap to me.

Now, do you know what's the total price of this modernization of Pilsen-Rokycany, after some price increases and (later) price reductions? It's just €150 million (a part of it is paid by the EU; it was supposed to be nearly 1/2 but the fraction may have changed). One could build shocking 1,200 projects like that for the money that will be wasted for the climate superstitions between 2014 and 2020. They would include many thousand of new railway stations and 1,200 new tunnels all of which would be the longest ones in the Czech Republic (well, tied). ;-) About 30 of these long tunnels would actually be in Czechia.

You may surely invent hundreds of other representations of €180 billion. For example, this destruction openly planned by the EU is approximately two times higher than the total damages by hurricane Katrina in 2005. It's shocking and it's just the money that is being collected from the member states (their taxpayers) and "directly wasted". On top of that, the EU is forcing the citizens and companies to waste tons of additional money in different ways.

The EU represents only about 20% of the world's GDP. If everyone were wasteful as the bureaucrats in Brussels, the world would be "directly wasting" €150 billion ($200 billion) a year for the climate superstitions. And I am generously assuming that no money is being directly spent for this "stuff" (or, more precisely, for the reduction of some essential "stuff") at the national or regional or local level in the EU member states.

In any decent empire, the likes of Commie Hedegaard would be assassinated in one of the speediest and most human ways. The EU isn't a decent empire so stupid brainwashed arrogant bitches such as her are destroying huge amounts of our money. Each five years, they're bombing tens of thousands of our bridges, thousands of multi-miles tunnels. They're a natural catastrophe that dwarfs the most damaging tropical cyclones in the human history.

Some funny cartoons about another failed preposterous climate summit. 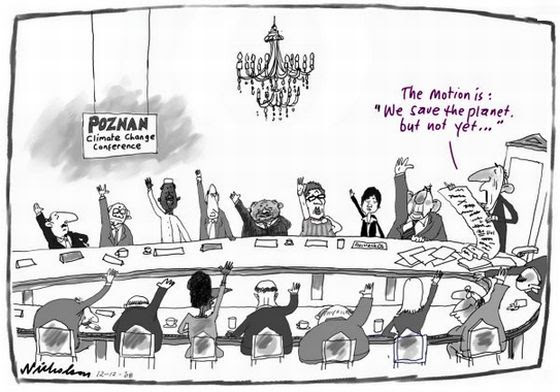 Or this recursive one.