Today in the morning, I was stunned by the dishonesty of the professional climate alarmists again. Their moral defects are just shocking. It seems completely obvious to me that they must know that they are lying 24 hours a day. 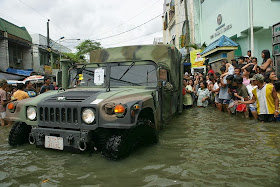 This controversy is about the claim that the typhoon Haiyan was the strongest tropical cyclone that ever made a landfall, and so on. You can see this preposterous misinformation almost everywhere. For example, start with the first sentence of the Wikipedia article on Typhoon Haiyan (update November 14th: this stuff was thankfully removed from the first sentences). The original source of this "verbal meme" is arguably Jeff Masters of Weather Underground. Steven Goddard tries to argue that this lie was very important.

All the mistakes are completely obvious and demonstrable, as I will argue below, but it is impossible to even fix basic errors on the Wikipedia page, or elsewhere. Such pages are being controlled by obsessed hardcore climate alarmist trolls and crackpots. They are just completely blind and deaf to any evidence and they revert any edit that would try to fix the basic mistakes.

So let's look at some real numbers and the origin of the flawed numbers.


Haiyan has killed 10,000 people or so (I am told that this number may have been just made up as well and according to Marc Morano's guess, it could be lowered to 2,000 when casualties are [more] properly counted; UPDATE: wow, Morano's guess was totally accurate) which is sad but neither its strength nor the number of casualties were unusual in that region. Some cyclones have killed hundreds of thousands of people.

The casualties depend on the trajectory and the good or bad luck (and the population density and the resilience of the buildings in the relevant places, and so on). The physical strength of the strongest tropical cyclones is most naturally measured by the minimum central pressure.


The normal atmospheric pressure is 1,013.25 hPa (hectopascals), OK, around one thousand. The more the pressure drops beneath 1,000 hPa, the stronger tropical cyclone you deal with. So have a look at the list of the most intense tropical cyclones ever.

They are geographically divided to 8 regions ("basins"). Starting from the lowest pressure (strongest cyclones), they are (the minimum pressure of the strongest cyclone is added):
Most of the basins are dominated by cyclones in recent decades because reliable and continuous measurements of the pressure only began recently. Some oceans tend to bring us stronger cyclones because there's more room for the depressions to grow and the geographic conditions are simply more or less favorable in different regions.

I wrote the strongest basin in the bold face because that's the region in which Haiyan belongs. If you focus on the table for that basin, you will see than Haiyan is between 21st and 35th strongest cyclone in that region since the 1950s or so. In 60 years or so, one gets 21-35 cyclones just in that region that are equally strong or stronger. In other words, every 2-3 years, one gets a cyclone of the equivalent or greater magnitude. The Pacific Ocean has already witnessed something like 1-3 billion of similar or stronger typhoons.

Some people love to spread the misinformation that the greatest cyclone just occurred somewhere (the same people who are silent about the 2013 Atlantic hurricane season now because it's the weakest one in more than a decade; except for Alexander Ač who has already informed me that he will write a text about the winter catastrophes that will be caused by the lack of the Atlantic hurricanes in 2013, no kidding!). But where did they get the "data" to back the claim that this average strong cyclone was a record-breaker?

CNN wrote (via Pielke Jr) that the storm surge was 40-50 feet; the actual figure from the meteorologists was 13-18 feet. CNN probably had no sensible source for the huge (doubled or tripled) figure at all. But what about the exaggerated speed?

Well, I can show you the exact page. It was a speedy alert page that NOAA reprinted after getting some news from JTWC, the Joint Typhoon Warning Center of the U.S. military:


This file is an archived old version of this NOAA page (which now offers a newer advisory with more current, lower figures) which contains the following sentence about the speed:


THE CURRENT INTENSITY HAS BEEN INCREASED TO 170 KNOTS BASED ON THE 8.0/8.0 DVORAK ESTIMATES FROM PGTW, KNES, AND RJTD.


It's not the only possible mistake but I think it's likely that this figure "170 knots" (which is meant to report some estimates using the satellites) is a typo; the units should have probably been mph. Note that the "huge speed" indicated, 170 knots, translates to 196 mph or 315 kph (km/h).

I believe that the correct reading should have been 170 mph which translates to 148 knots or 274 kph. This seems consistent with media's (e.g. BBC's) newer claims of "gusts up to 275 km/h" (see also The Washington Post, "up to 170 mph"). It is also consistent with the "gustiness of up to 275 kph" at this page of the Philippines Met Agency:

If this maximum speed at 275 km/h is right, Haiyan/Yolanda is clearly unspectacular according to this particular criterion, too. Only the original text file claimed "170 knots" i.e. "315 km/h" while other sources have apparently fixed the mistake and replaced it by "170 mph" i.e. "275 km/h". It's obvious that alarmists will prefer to believe the figure 315 while skeptics are somewhat more likely to pick 275 km/h.

But even if they have really meant 170 knots i.e. 315 km/h, the very high figure, it is still too small to justify the claims e.g. on the Wikipedia page about Haiyan. It says


Typhoon Haiyan (known in the Philippines as Typhoon Yolanda) is unofficially the strongest recorded tropical cyclone to make landfall, with wind speeds up to 315 km/h (195 mph).


However, it's trivial to find hurricanes with higher speeds in the same region of the world. Typhoon Tip that made landfall on southern Japan in 1979 had the record-breaking minimum central pressure of 870 hPa but "only" 305 km/h of the maximum pressure. However, we may pick another example, Typhoon Ida that made landfall in Japan in 1958. Its maximum 1-minute sustained winds were 325 km/h, higher than even the "highest" figure associated with Haiyan. Kit in 1967 and Joan 1959 tied those 315 km/h, and so on.

Fine. So I wrote this to the "chronic reverter" of the corrections on the Wikipedia page on Typhoon Haiyan. Even if we accept that the deleted text file that used to sit on the NOAA server is a legitimate source backing dozens of claims on this page that Haiyan was the strongest cyclone that made a landfall ever, and all this stuff, it's still wrong because we may still find higher speeds of hurricanes that made landfall.

So you can imagine what this "editor" began to claim. He began to claim that the Haiyan Wikipedia page talks about the "speed during the landfall". There are three main problems with this assertion: First, the archived NOAA page doesn't say that this was the speed measured at the moment of the landfall (and at the right place, a beach). Second, the Wikipedia page doesn't say that it measures the strength of the cyclone according to this criterion. Third, even if it were saying, it is such a contrived criterion that you may find a similarly contrived criterion to make pretty much any cyclone in the top ten "the record-breaker".

When one chooses a criterion that isn't contrived or artificially fudged to make someone look stronger, and when one isn't obsessed by the belief that every sentence must be interpreted in the "strong way", he must see that Haiyan wasn't extraordinary in any way. There is no reason whatsoever to think that 2013 should see stronger cyclones than those that have been decorating our blue, not green planet for billions of years. All these claims about permanent "record-breakers" are extraordinary claims that deserve extraordinary evidence and all the people who fail to demand such extraordinary evidence are either corrupt ideologues or brainwashed gullible morons.

On the other hand, even though there is no detectable influence of the humans etc., some old records are bound to be broken almost every year. The laws of statistics won't allow you exemptions forever. If you define 50 different "disciplines" in which new records may be set and if the historical record is only 50 years old, one breaks 1 record per year in average. People who try to derive far-reaching consequences from these events that are almost inevitable are just not thinking rationally.

Roy Spencer talked about related things on CNN Piers Morgan Live show. It was as sensible and balanced as you may expect from a lukewarmer like Spencer. Still, it was not enough for their "environmental correspondent", a breathtakingly arrogant asshole – with apologies to all genuine assholes that at least play a constructive role in some activities – Mark Hertsgaard of the Nation. Like a fanatic member of the Inquisition, this inkspiller began to bombard Spencer with repetitive "denier" libels and just ignored Spencer's rocksolid and insanely diplomatic proofs that all Hertsgaard's claims were plain lies.

The only meaningful language ready to speak to the likes of Mr Hertsgaard is the language of the firearms. Ratatatatah.

Yesterday, a rally of 50,000 Poles was warned against the climate alarmist Nazis and Stalinists.
Luboš Motl v 8:09 AM
Share