Visas no longer needed for Canada: thank you

After four years, Canada abolished the tourist visa requirements for Czechs again. The visas have been introduced and canceled a few times in recent decades. 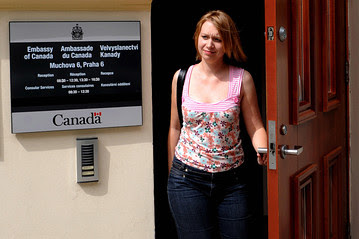 Judging by the sentiment in the face, this Czech woman probably got the visas back in 2009 when they were imposed again shortly before she was leaving the Canadian embassy.

The good news were announced by Otto Jelinek, the new Canada's ambassador to Czechia (born in Prague, Third Reich), a rich guy, and a former figure-skater. Incidentally, I do think that "binational" (yet loyal) folks are a good choice for the chairs of ambassadors. We are sending Livia Klausová, the Slovak-born ex-president's wife, to the Slovak capital and I support this idea.

It's being claimed that Canada had to reform its asylum system to prevent the abuse of its generous welfare system by Central European immigrants, especially the gipsies from Czechia. It may have been some work but it's obvious that it was the right thing to do.


A few days ago, I was surprised to learn that Canada – which I/we usually imagine as the most welcoming country possible – was actually the least welcoming major country for the Jews after the Night of Broken Glasses.


It's of course an internal question for the Canadians whether they want to allow someone else to enter the country. But if visas are introduced against the Czechs because of the gipsies, it's clearly a racist decision of a sort. And it's counterproductive – one creating many new unnecessary enemies (in Czechia and the EU that sort of began to protect its member country).

In the afternoon, at 5 pm, the historical Moravian capital Olomouc will host some unusual athletes from Canada – namely its soccer players. The Czech representation team is believed to be so superior that if they lose against the maple leaves, the players and the coach will be rightfully derided by everyone.

Earlier than that, at 4 pm, the Davis Cup finals will begin in Belgrade. The Serbs will host the defending winners from Czechia. Radek Štěpánek will face a hard foe in the first match – No-fuck Jock (of) Itch, the world's #2 (yup, I invented the new spelling of his name LOL).

Because much of this blog post was about Canada, I shouldn't forget to mention that I found it important for Canada to "applaud" Australia's plan to scrap the carbon tax. Canada and Australia are similar in many respects but due to their geographic separation, this trans-Pacific echo may influence the international atmosphere, indeed.

Even Western countries and confederations led by much more left-wing governments, most notably the U.S. and the EU, refuse some particular insane plan by Brazil and a group of developing nations to pay communist-style "compensations" because the temperature on Earth isn't at absolute zero, or something like that. Bizarre arguments are used both to support and reject similar bizarre proposals, too. It must be crazy over there in Warsaw.

26,794 Americans signed for the new, socialist health care in October. I thought it would already be mandatory? Of course that if it's not mandatory, people – including the superficial backers of Obama's policies – will avoid it. I can't believe that someone would identify such an obviously losing project as the tip of his political career. In Czechia, we've had various projects to computerize the health care documents (IZIP), welfare payments (S-card), and public transportation IDs (in Prague), not to mention the "second pillar of the pension reform". All these projects turned out to be similar non-events, with almost no one using it. It's almost inevitable.

On the other hand, I just got a "consumer card" of the Czech Post and it's wonderful. I was sending 3 packages and a recommended letter with documents during the last 3 days and avoided some extra paperwork with addresses, received e-mail confirmations that those things were delivered, and so on. Not to mention a minor 5% discount on the post office prices. This is good for me because it works and doesn't depend on the overall success of the project. I would still guess that almost no one will be using it – even though it is so useful. Recommended to all Czech readers, anyway.
Luboš Motl v 12:51 PM
Share