which claims to "disprove" the ER-EPR correspondence by Susskind and Maldacena and the earlier and more vague van Raamsdonk's glue-entanglement correspondence by "disproving" the 2001 "double CFT" treatment of the eternal black hole by Maldacena.

The only problem is that Avery and Chowdhury are just plain wrong.

Because one picture has a decomposed Hamiltonian without mutual interactions while the other picture requires an interaction term for any decomposition, they can't be equivalent to each other, these folks believe.


Such an argument may look convincing to superficial eyes but in practice, it is very silly because you could use it to disprove any duality that alters the spacetime topology (T-duality and mirror symmetry, string-string duality, or the AdS/CFT correspondence even with one boundary only). In all these contexts, the complaint would be equally invalid. 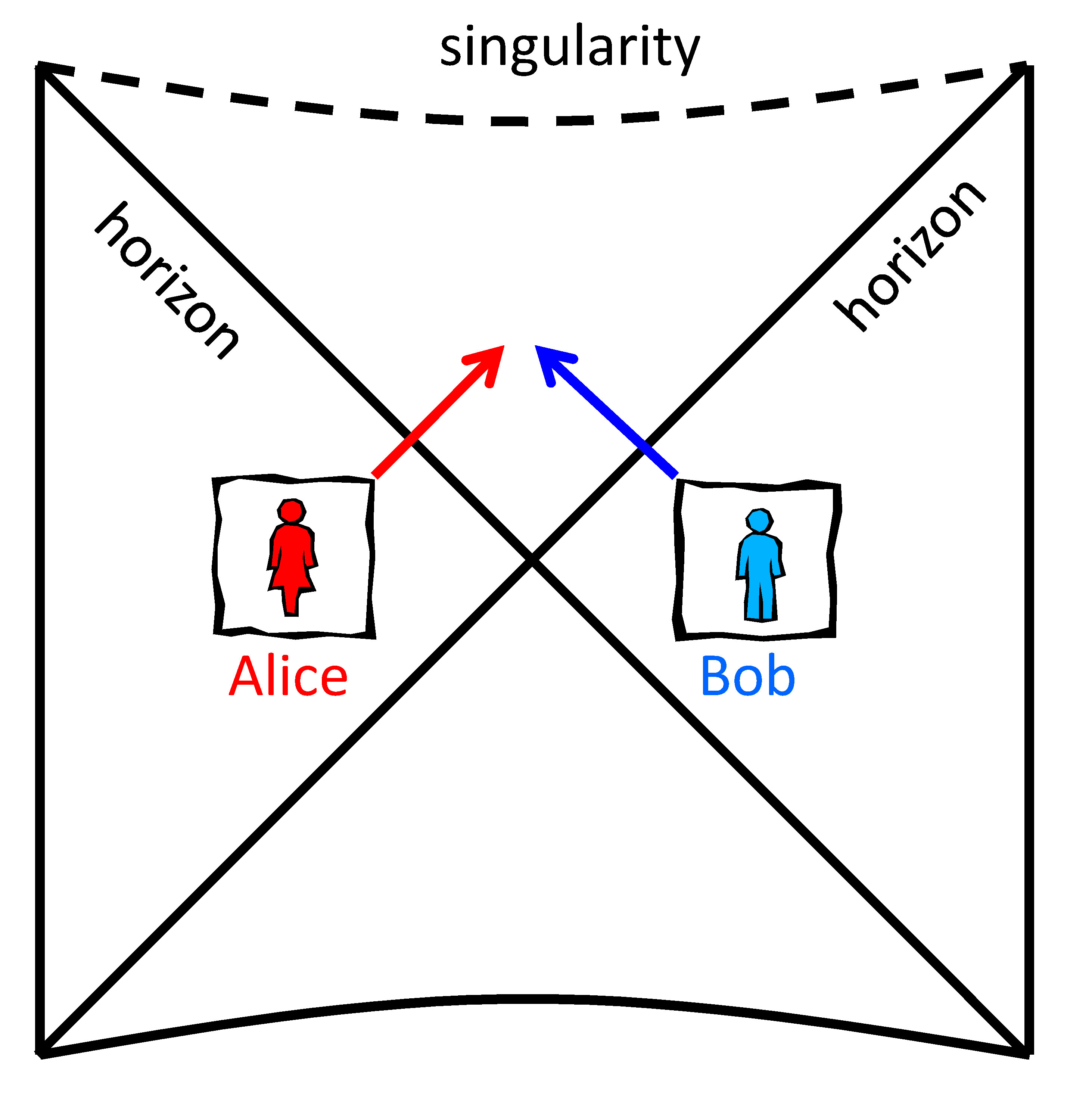 This is the Penrose diagram of the eternal AdS black hole; well, more precisely, there should also be a singularity at the bottom (in the past) if the black hole is truly eternal. But you see the horizons (diagonal lines), the two (left and right) exterior regions, and the black hole interior which is the triangle at the top. The boundaries on the left and right side are vertical because they're the usual AdS boundaries you know from the AdS/CFT correspondence even in the absence of black holes.

Each exterior region is linked to a single dual CFT on one of the boundaries and Maldacena's original 2001 claim was that the eternal black hole connecting the boudaries is represented by an entangled state – a purified thermofield double state. Now, the two *ry authors say that the translation of the two CFTs in the time direction is generated by\[

\] while the separation of the bulk spacetime into two parts (at the center, the intersection of the two horizons) leads to a different generator\[

\] with a nonzero interaction term. In their argumentation, this interaction term is needed to connect the two sides and to avoid e.g. a reflective mirror at the center of the space (separating the spacetime to the left and right part). These forms of the Hamiltonian differ so they can't be equivalent, they say.

It's really the whole point of the holography – as well as any other spacetime-geometry-changing duality of string theory – that the "natural operators" we think about at the two sides of the duality aren't the same. They are very different. The very meaning of any such duality is that the same Hilbert space may be parameterized by different sets of quasi-local ("string field") operators.

Each of the two CFT field collections \(CFT_{L,R}\) is in principle capable of seeing into the whole bulk. Nevertheless, the \(CFT_L\otimes CFT_R\) operators don't describe "two full bulks" because the condition that the states of the "two chunks of spacetime" that could be read from the two CFT states must be compatible with the asymptotically AdS space on both sides effectively halves the number of bulk operators back to the expected size.

You could say that \(H_L=H'_L\) "approximately" but their difference is exactly related to the possible degrees of freedom living at the (left) horizon and these are exactly those that decide about the presence of \(H_{\rm int}\) in the decomposition of \(H\). In essence, you may say that the core of the mistake of these two critics is the first of the two "elementary points" (their assumptions) on page 2 of the new paper:


All Hilbert spaces of the same dimension are isomorphic, so a particular "state"
is only meaningful if we agree what operators we are going to act with before hand.


Indeed, all Hilbert spaces of the same dimensions are isomorphic and their "physical character" is indeed only given once we decide about some operators that act on it. But the whole point of the dualities such as T-duality, mirror symmetry, and AdS/CFT (and alternate descriptions in topology-changing contexts) is that there are two (or several) ways to decide which operators we may consider natural. So the assumption that the choice of the operators has to be unique (and they're vague enough so that it is not clear whether they claim it but they probably do claim it because they're using this claim) is surely wrong.

(Their second assumption, "Alice's degrees of freedom have to interact both with A and with B for her to measure A and B, is surely correct. It is a tautology, we could say, but a totally invalid assumption that A and B must always be fully independent and parameterize two tensor factors of a Hilbert space may be "innocently" added in between the lines by these authors and by others.)

The dualities' ability to associate different "sets of natural operators" with a Hilbert space doesn't mean that "anything goes" – it doesn't follow that all sets of operators acting on the Hilbert space become equally good. After all, there are still operators such as the Hamiltonian (or the stress-energy tensor) that must respect some locality in some spacetime – so only some Hamiltonians on a given spacetime are "good Hamiltonians of a local field theory or a quantum gravity theory". But it is still true that the choice isn't unique. After all, there may be many isometries and many Hamiltonians acting on a Hilbert space, too.

The spacetime interpretation of a valid Hilbert space in string theory or quantum gravity isn't unique. I've written a blog post about this fact two months ago.

One doesn't need to discuss potentially complex or "controversial" models of higher-dimensional quantum gravity. Take the two-dimensional world sheets and their sewing and cutting, see pages 294- of Volume I of Polchinski's "String Theory". The correlation functions on a higher-genus Riemann surface may be calculated from correlation functions on two lower-genus Riemann surfaces with some additional (correlated) insertions in these two components (see the figure on page 295). This is really a mathematically analogous or isomorphic situation, a special case of the topics discussed in the higher-dimensional quantum gravity, too.

Ignoring "normalizability" of operators etc., the space of operators on the single higher-genus Riemann surface is the same as the space of operators on the two lower-genus components of the world sheet. The correlated insertions added to the two-component picture (which are equivalent to the choice of the thermofield double state in Maldacena's 2001 picture and all of the followups) are the players that effectively "merge" the components. The products of operators that do include this correlated insertion (and they are consequently close to the entangled, thermofield double state) may be interpreted as operators on a single, glued manifold (in this case the world sheet).

Maldacena's 2001 picture and its followups is really nothing else than the import of this very general idea that has been known for decades into the context of AdS/CFT and higher-dimensional quantum gravity in general.

I started with the two decompositions of the Hamiltonian. The total Hamiltonian may be the same operator in both descriptions. But its separations into pieces are never the same. The separation of a Hamiltonian into pieces depends on the notion of "locality" or "cluster decomposition" in the relevant spacetime that gives us the "natural operators". But for different, mutually dual descriptions of the same Hilbert space, these "natural operators" are different. The spacetimes on which they live are different. Consequently, the descriptions have different rules of the "locality" or "cluster decomposition" which is why the splittings of the Hamiltonians into pieces are different, too. This dependence on the "spacetime incorporated in a description" exists in T-duality, U-duality, mirror symmetry, topology-changing transitions, and AdS/CFT, whether or not the spacetime has many boundaries or just one boundary.

In the bulk description of the eternal black hole, we can't immediately see that the Hilbert space may be written as a tensor product of two copies and the Hamiltonian may be rewritten as a sum of two pieces. But it is nevertheless true and the description involving two boundary CFTs makes this fact manifest. This description is "hard to see" from the bulk viewpoint because none of the operators in the CFTs has a clear and simple bulk interpretation – in terms of some operators that are simple (in the bulk) and have a simple dependence on the bulk coordinates.

But – and this is a point often articulated by Raju and Papadodimas in a similar form (the today's paper only cites their 2012 work and it is largely neglected, anyway) – for states of the AdS black hole that are close to thermal ones (and black hole states are a major example), it is simply possible to define two sets of exterior operators that happen to be entangled near the horizon. You could say that it is a "bonus surprise" that quantum mechanics brings us and that wouldn't exist in classical physics. This doubling (the number "two") emerges because the thermal state (and observables) are given by operators in quantum mechanics and they may be multiplied by other observables from two sides – from the left side and from the right side. The observables' being operators with "two" Hilbert space indices is the ultimate reason why a quantum theory of gravity guarantees the existence of "two" asymptotic sets of CFT operators in the 2001 Maldacena picture of the eternal AdS black hole, aside from analogous later results!

There are interactions between the two bulk operator subalgebras. In the bulk description, it's obvious from the connectedness of the whole spacetime and from the existence of the shared black hole interior in particular. In the double-CFT description, this is true because the bulk operators in the two subalgebras (halves of the spacetime) can't be exactly identified with each of the two CFTs. Instead, each of the halves contains functionals of both the left and right CFT boundary operators. They are mixed up on both sides because it's not simple to define the condition "this operator only depends on bulk operators in the left half of the spacetime" in terms of the CFT operators. In other words, the bulk locality is hard to see for the CFT!

We may also say that the critics' proof by contradiction is wrong because they effectively assume that the bulk locality is manifest in the boundary description and works in the naive way, by identifying the two cluster decompositions. It is a rudimentary mistake, we might say, one that seems to misunderstand the very purpose and character of string dualities in general.
Luboš Motl v 9:11 AM
Share